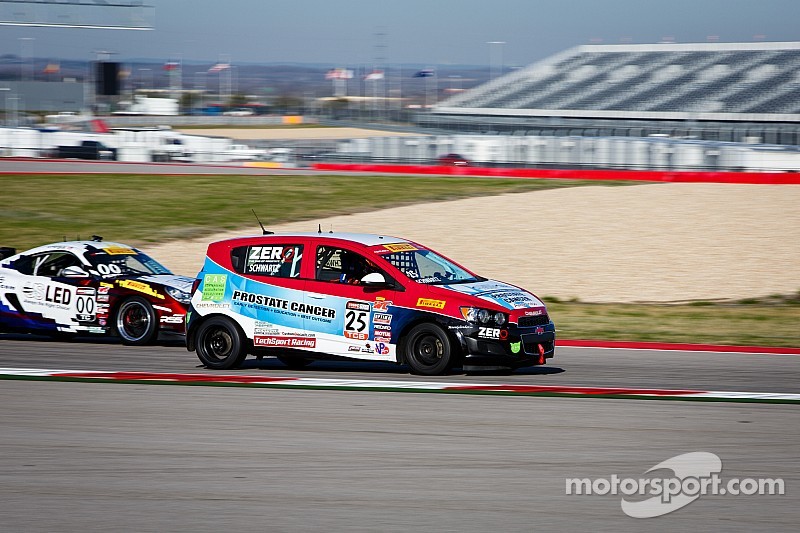 Victorious in TC, TCA and TCB in Pirelli World Challenge.

From the standing start the head of the field went three wide into turn 1 with TC pole sitter Ernie Francis Jr., of Davie, Fla, in the No. 98 Breathless Racing/Time4Learning Mazda MX5 taking the lead out of turn 1. Fergus, fourth on the grid, had a great launch and passed both Adam Poland, of Mount Vernon, Texas in the No. 33 Edge Addicts/Majestic Pet EASTEX Motorsports Mazda MX-5 and Cody Ellsworth, of Jupiter, Fla, in the No. 04 Racer Ink Autometrics Motorsports Porsche Cayman.

In TCB, pole sitter Travis Washay, of Milford, Conn., in the No. 30 Indian Summer Racing MINI Cooper was passed by Schwartz, in the No. 25 Tech Sport Racing/Zero Cancer Chevy Sonic. Fourth-on-the-grid, Glenn Nixon, of Mission, B.C. in the No. 58 Racing.ca/LaptopScreen.com/Nixon Prosports MINI Cooper moved into second.

Mikey Taylor, of Birmingham, Ala. driving his No. 26 Unitronics Volkswagen Jetta GLI got a great start in TC going from ninth to sixth. Francis and Fergus would hook up to pull away building a 2.1-second gap over Poland in third by the end of lap two.

On lap 3, Taylor carried momentum down the Mario Andretti straight and passed Cory Friedman, of Charleston, S.C. in the No. 03 Mac Papers/Hastings Fiberglass Porsche Cayman through turn 8 to take over fifth.

In TCB, Schwartz still led Nixon, with Randy Smith, of Coldwater, ON in the No. 66 IDLife/Race2IDLife.com Shea Racing Honda Fit in third. In TCA, Goulart led while behind him a battle was raging for second between Wolfe and Holton by lap 5.

A full-course yellow on Lap 6 occurred when Andrei Kisel, of North Vancouver, B.C. rolled his No. 57 Racing.ca/LaptopScreen.com MINI Cooper on its roof in turn 5 after launching the car off the curb through the turn. Kisel was not injured.

The race resumed on lap 11 and Fergus was able to get a run on Francis Jr. into turn 1 on the inside. Fergus was able to carry momentum alongside Francis Jr. and was able to move into first through turn 3. During lap 12 in TCA, Goulart's No. 23 was forced to retire and Wolfe moved into the lead with Holton in pursuit. In TCB, Schwartz remained in the lead over Nixon and Smith.

Through Lap 13 Fergus led Francis Jr., Poland, Taylor, and Ellsworth with Poland setting fast lap with a 1:30.350. Fergus answered the next time around with a fast lap of 1:30.336. Fergus's quick lap increased his lead by .7 seconds over Francis Jr. as Poland closed up in third. On lap 16, Holton passed Wolfe to take the lead in TCA with Patrick Seguin, of Ottawa, ON in third in the No. 49 helpkevinproject.com/buynutrimind.com Branden Peterson/Team Ost Racing Honda Civic Si.

On the same lap the TC leaders encountered lap traffic for the first time and Fergus' lead evaporated with Francis Jr. and Poland hot on his heels. At the end of the Mario Andretti Straight, Poland used lap traffic to pull a deft move to get around both Fergus and Francis and move into first. Poland's move was awarded the Invisible Glass Clean Pass of the Race. Once the TC leaders cleared the traffic, Fergus and Francis were able to close up the gap and put pressure on Poland.

On lap 17, Fergus pressured Poland through turns 9 and 10 retaking the lead over Poland with Francis still in the fight in third. Fergus' move to retake the lead was awarded the Cadillac ATS-V R Move of the Race.

As the white flag flew Poland was glued to the back of Fergus through turns 1 and into 2. Out of turn 5 and onto the back straight the two would go side-by side as they once again encountered lap traffic. Fergus and Poland would dice through the final few turns of the race and as the two came through the final turn of the track on to the front straight, Fergus would edge out Poland for the win. The differential as they crossed the line was .081, a new smallest margin of victory for the class at CTMP.

Ellsworth, Friedman, and Jason Cherry, of Gambrills, MD in the No. 13 Skullcandy/Nissan Altima would close out the top 5. Francis dropped off the pace ultimately finishing in 10th.
In TCA, Holton would win over Wolfe and Sequin. While in TCB, it was Schwartz, over Nixon and Smith

"Our race went very well. We had a very good start and after starting second we quickly moved into first," said Schwartz. "As the race progressed I had a lot of confidence in the car. After an emotional day yesterday where an issue with two laps to go cost me the win, it was great to get back on the winning side after the momentum of the winning streak at COTA. When you have as much weight as we are now carrying in the front, 62% front weight bias, it really puts a toll on the Pirelli tires. But they have done a great job in making them wear so consistently and well."

"It was a pretty crazy race starting third," said Holton. "I think at one point we (Wolfe) and I were two wide through every corner except turn 5. We had some really good racing and I was able to get by on the lap after the restart and was using traffic to get a gap and I was able to hold it. It was great race and a great day to have the Children's Tumor Foundation on the car and we have a couple of families here."

"It was a lot more exciting than it should have been I guess. The standing start was only my second one ever and it was pretty awesome fourth to second in the first turn," said Fergus. "The rest of the race was a very hard fought battle. On the restart I got by Ernie into turn 1. Racing with Adam that was very hard racing a lot of fun. The B spec traffic made it a little tough on the last lap. My bad coming into the last turn as I timed it wrong and it made for a very exciting drag race to the finish. It was a very very good race for us today and I'd just like to thank the crew. My Uncle Randy has been with us for 30 years and Emmo, Cody have been working very hard to give me a car like this it was a very good race and very exciting thanks to everybody.

Results are provisional until posted final. Sunday's Round 6 TC, TCA and TCB Championship race is scheduled for 8 a.m. Sunday, May 17.

O'Connell, Heitkotter double up in Canada

RCR and its affiliates fill the top ten at Daytona