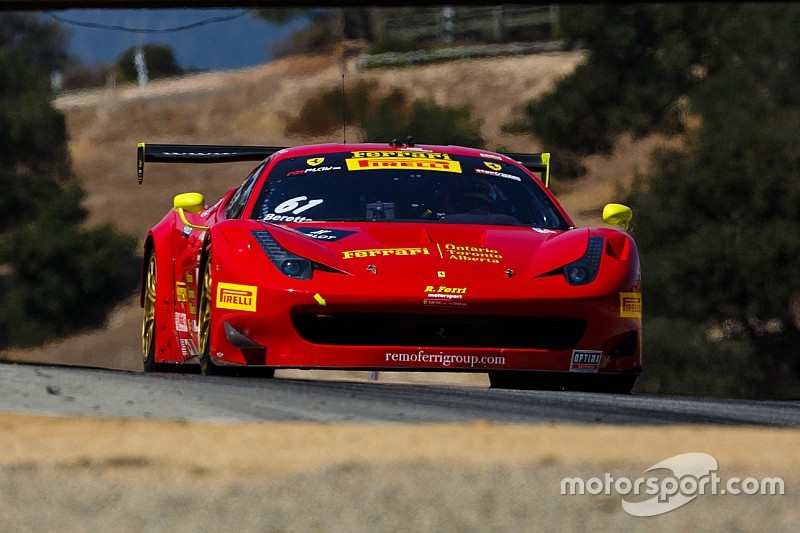 Englewood Cliffs, N.J. – The Pirelli World Challenge season came to a close with a dominating performance by a pair of Ferrari 458 Italias during Sunday afternoon’s race at Laguna Seca in Salinas, California.

The pair of MOMO/NGT Motorsports Ferrari 458 Italias locked out the front row in quaifying. Making their first Pirelli World Challenge start of the season, Alessandro Pier Guidi took pole position with Alessandro Balzan qualifying in second position. When the lights went green for the standing start of Sunday’s 50-minute race, Balzan took the lead in the no. 29 MOMO/NGT Motorsports Ferrari 458 Italia and held it all the way to the checkered flag.

Pier Guidi finished right behind in second position in the no. 30 MOMO / NGT Motorsports Ferrari 458 Italia, and set the fastest lap of the race. The duo were well clear of the rest of the field, with Pier Guidi finishing 24 seconds ahead of the third-placed car.

Olivier Beretta, in the no. 61 R. Ferri Motorsports Ferrari 458 Italia, entered the weekend in contention for the driver’s championship. After qualifying in twelfth position, Beretta advanced to third but was slowed with a penalty in the closing stages of the race. He would ultimately retire from the race with a few minutes remaining. Despite the result, Beretta finished the season in second position in the GT championship, with three victories.