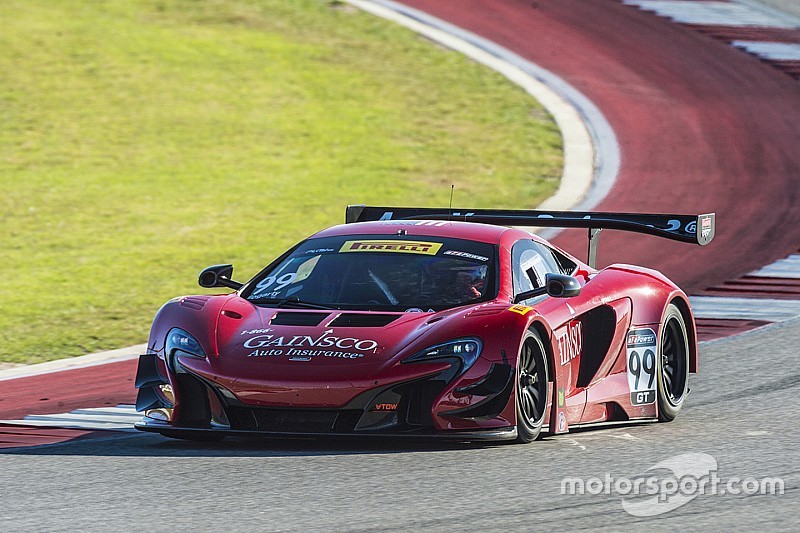 Jon Fogarty returns to his ‘home’ track after a 12-year hiatus, eager to put some bad memories behind him… and behind the GAINSCO/Bob Stallings team, too.

Despite winning two Formula Atlantic championships and two Grand-Am sportscar championships, Fogarty has never had much of a chance to strut his talent on Toyota Grand Prix of Long Beach weekend. His third place in Pacific Coast Motorsports’ Atlantic car in 2004 is an inadequate reflection of his competitiveness there.

A first-turn crash in the 2001 Indy Lights race and a blown Atlantic engine in ’03 were followed by that podium finish in ’04 and, it’s somewhat astonishing to realize that was the last time Fogarty raced at America’s oldest street course.

A dozen years on, driving the GAINSCO/Bob Stallings racing McLaren 650S GT3 in the Pirelli World Challenge, Fogarty has a realistic chance of winning. But if he’s sensitive to bad vibes, he’ll find little solace in the Long Beach heritage of his team.

“Everyone loves Long Beach… except me, it seems!” he commented. “We started eighth there in 2006 and our driver [Rocky Moran Jr.] was T-boned on the front straight close to the start of the race. It was a very, very scary incident that left Rocky with a broken leg and the Red Dragon was completely destroyed.

“I know Long Beach is an incredible event, and I’ve always hoped we would have the opportunity to go back and find some success. That’s what we intend to do this weekend.”

GAINSCO/Bob Stallings Racing was out of racing for two years, following the huge shunt suffered by Memo Gidley in the 2014 Rolex 24 at Daytona. The crash sent Gidley through the agonies of multiple surgeries, and the team's hiatus prompted the apparent retirement of one of its drivers, Alex Gurney. Fogarty, meanwhile, kept himself busy with both Extreme Speed Motorsport and Action Express Racing.

With Stallings restarting his team for 2016, but switching from IMSA to Pirelli World Challenge, and from Daytona Prototype to McLaren GT, the new Red Dragon has already shown signs of promise. And Fogarty is once more back where he 'belongs', in the minds of his many fans.

In the PWC season-opener at Circuit of The Americas, Fogarty charged from 13th on the grid to finish third, notably able to take care of his tires through to the end of the race. And although the McLaren struggled under braking at St. Petersburg three weeks ago, Fogarty still racked up a pair of top-10 finishes.

It seems unlikely that these will have improved following a test at Barber Motorsports Park last week; the smooth natural road course has precious little in common with bumpy street tracks such as Long Beach and St. Petersburg. Yet Fogarty insists the test was successful, and lessons were learned.

He said: “It was a really good day for us.  It wasn’t originally on our schedule, but after the first few rounds we had a better idea of what we needed to figure out going into Long Beach, where there isn’t much track time.

“I think everything we learned should translate into better race weekend performance.  We focused a lot on qualifying simulations and also improved our brake package, so I am pleased. I think we will be able to take some of the things we learned and use them to our advantage.”

“The Toyota Grand Prix of Long Beach is a historic event and it’s great to be part of it – I’ve missed it,” said Fogarty, a California native with family in the area. “It’s a bit of a home race for me.”

But he did warn that car-preservation would be foremost in his mind, given that the next PWC rounds are just a week later at Barber.

“The tight circuit and 24 or so large cars makes it a bit nerve-wracking since we have to pack up a perfect car for our double-header across the country in Alabama just a few days later,” he commented. “It’s going to be very important to take care of the equipment.

“Long Beach is a very traditional street circuit, it’s bumpy and has big crown and camber changes. It’s a place where the car never feels great but if you know what to expect, it is a lot of fun. Of course, the fountain is really special but I also love the back straight - it feels like a tunnel with all of the high buildings on both sides.  I can’t wait to get there with the new Red Dragon, it’s going to be very special to drive the McLaren there.”

Added Stallings: “The Long Beach race is one that most drivers want on their list of races participated in and having performed well in.

“To accomplish this a team needs a good racecar, good set-up, capable driver, an upfront starting position and a whole lot of luck. The track is very challenging and there are a few places where good teams can meet great misfortune, especially when two or more racers are attempting to navigate through a space designed for only one – which happens regularly at Long Beach!”

From the pure performance perspective, Stallings was keeping his ambitions on the realistic side of optimistic.

“The No. 99 GAINSCO team is getting used to a new car and a new series,” he said, “and that adds to the challenge for us at Long Beach. [But] we experienced a good day of testing last week, and we got to know our McLaren GT a little better.

“Jon knows the track, having raced there before and he is looking forward to the challenge it represents, and so am I.”