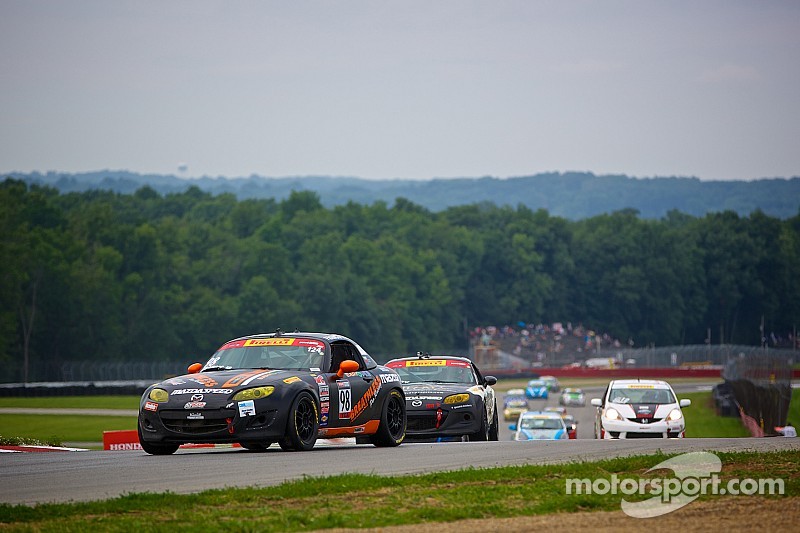 The start for the TCA class was not as clean as the No. 67 Lucas Oil/BUBBA Burger/Hendrick Honda, Shea Racing, Honda Civic Si of third-on-the-TCA-grid Shea Holbrook, of Orlando, Fla., made hard contact with the inside wall in turn 1 bringing out a full-course caution. Holbrook was not injured but her No. 67 car was significantly damaged.

The race was restarted on lap 5 with Francis Jr. leading Fergus, while Adam Poland, from Mount Vernon, Texas., in his No. 33 Edge Addicts/Majestic Pet, EASTEX Motorsports, Mazda MX-5 moved into third past Cody Ellsworth, of Jupiter, FL., and his No. 04 Mac Papers/Hastings Fiberglass, Autometrics Motorsports, Porsche Cayman.

During the lap, Francis pulled out a two-second gap on the field and Poland moved to challenge Fergus for second. Poland was able to get by to take P2 as Nathan Stacy, of Owesso, Okla., driving the No. 14 3R Racing/Stacy Racing, Volvo C30 closed on the No. 26 of Mikey Taylor, from Birmingham, Ala., who had slipped past to take fifth on the restart.

In TCA, the restart found Goulart, driving the No. 23 Tech Sport Racing, Mazda RX-8 out front followed by the No. 36 of Jason Wolfe, of Mount Vernon, Ohio, in the Wolfe Trucking, Kinetic Motorsports, Kia Forte Koup. Following in third was the No. 71 of Paul Holton out of Tallahassee, Fla., in his Children's Tumor Foundation/Honda Performance Development/Racing4Research.org, Compass360 Racing, Honda Civic Si.

The TCB restart came to the green just as they had qualified with the No. 25 of Johan Schwartz, of Huntersville, N.C., in his Tech Sport Racing/Zero Cancer, Chevy Sonic, leading the No. 58 of Canadian Nixon in his Racing.ca/LaptopScreen.com/Nixon Prosports, MINI Cooper over his No. 57 teammate and fellow Canadian Andrei Kisel, of North Vancouver, B.C. in his Racing.ca/LaptopScreen.com/Nixon Prosports, MINI Cooper in third.

On Lap 10, the TC leaders came up on the TCB field which allowed Ellsworth, now in third, to close the gap on Poland. In TCA, the top three remained Goulart, Wolfe, and Holton followed by Patrick Seguin, of Ottawa, ON., in his No. 49 helpkevinproject.com/buynutrimind.com, Branden Peterson/Team Ost Racing, Honda Civic Si. Of note, Goulart had pulled a gap on second place Wolfe pushing laps fast enough to close in on the back of the TC field. In TCB, leader Schwartz began to gap Nixon, Kisel, and Wei Lu, of Richmond, B.C. in his No. 59 Racing.ca/LaptopScreen.com/Nixon Prosports, MINI Cooper. While, Mac Korince, of Ridgeway, ON., in the No. 51 INDIAN SUMMER RACING, MINI Cooper had moved to fifth from 12th followed by his teammate Travis W. Washay, of Milford, Conn., also in an INDIAN SUMMER RACING, MINI Cooper.

Lap 11 saw the second full-course caution fly this time for the No. 2 TCB entry of Van Svenson, of Hyde Park, N.Y., who had spun to a stop in turn 3 while battling for 5th. The yellow worked to Poland's advantage having just set the fast time of the race to close the gap to the TC leader Francis.

As the race resumed on lap 14, Francis Jr. led Poland, Fergus, Ellsworth, and Stacy in TC. In TCA it was Goulart over Wolfe, Holton, Seguin, and Wright. In TCB Schwartz led Nixon, Kisel, Lu, and Korince.

By lap 18 Francis had built a 3.5 second lead over Poland followed by Ellsworth, Stacy and Fergus, who had dropped to fifth. Two laps later Fergus was able to get by Stacy to move into fourth. When the checker flew it was Francis taking the win followed by Poland, Ellsworth, Fergus, and Stacy in TC. In TCA the finishing order was Goulart, Holton, and Wolfe.

The TCB final lap was a thriller as Schwartz's Sonic lost momentum as the driver downshifted into second coming out of turn 5B and onto the Mario Andretti Straight allowing Nixon, Korince, and Washay in their MINIs to slide by. Schwartz ended in fourth followed by Kisel in fifth.

"I had quite a lead until the second full-course yellow," said Schwartz. "After the second restart, the MINIs were working together to draft and were able to keep the gap close. So, in turn 5B I decided to downshift into second instead of my normal third. When I went to go back into third it did not find the gear like I wanted it to and I lost of all my momentum down the straightaway."

"Once he (Schwartz) missed the shift it allowed us in our MINI and the other MINIs behind to close in," said Nixon. "We were all bumper to bumper at that point and it made for an exciting finish to the race. The last time I was here was 15 years ago so even though it's in my home country it is not a place I get to compete at regularly."

"This race weekend we knew coming in we were behind in the points," said Francis Jr. "So we knew we needed to get some good finishes and fast lap points. The hilly, up and down track here is one that I really enjoy. I think that it suits me and my driving style. We are looking forward to the next two races and hope we can continue to close the points gap."

"With this being my first time racing in the Pirelli World Challenge, the victory on my debut is phenomenal," said Goulart. "I really have to thank the TechSportRacing.com for giving me a great car. My race was about controlling it at the front. Especially on the starts and restarts I need to manage a small issue with hearing the call for the restarts on my radio. But the Mazda was great and I was able to control the pace and take the win."

Of note, Jason Fichter, of Jupiter, Fla., in the No. 7 Turn 7 Motorsports/Donate LifeBreathless Racing MINI Cooper was awarded the Optima Batteries Best Start gaining two positions off of the start. Holton was awarded the Cadillac Move of the Race for positions gained off of the first restart. The Invisible Clean Pass of the Race award went to Poland for his pass on Fergus. Kris Wright, of Pittsburgh, Pa., in the No. 34 Wright Automotive Group Kinetic Motorsports Kia Forte Koup was awarded the VP Racing Fuels Hard Charger award for gaining 10 positions during the race. The StopTech Brake Late Finish First award went to Nixon.

Results are provisional until posted final. Round 5 of the TC, TCA and TCB Championship is scheduled for 8:50 a.m. EDT Saturday. Watch live streaming of the race at world-challengetv.com or torque.tv.