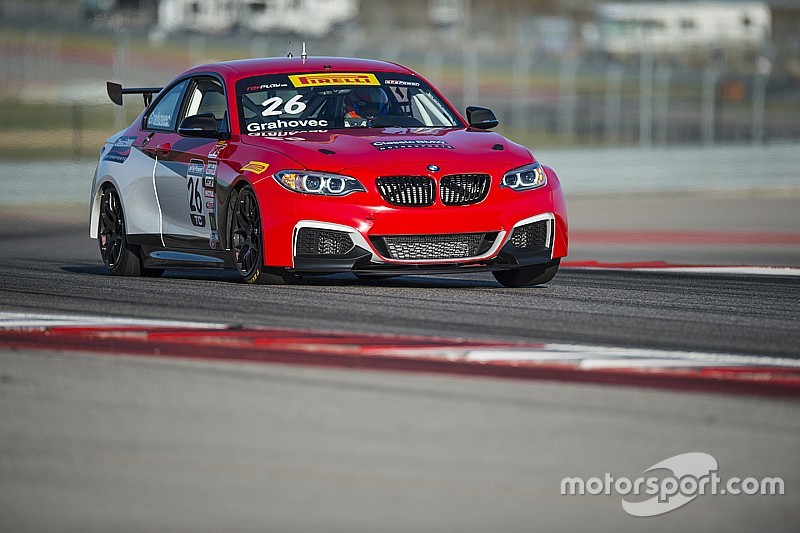 Toby Grahovec, Jason Wolfe and Will Rodgers won the TC/TCA/TCB Round 2 race of the 2016 Pirelli World Challenge season at Circuit of the Americas

The race kicked off with a standing start and Carl Rydquist, in the No. 34 CA Sport Nissan NISMO 370Z shooting out to the race lead.

Kozarov didn’t wait long on the opening lap in TC, overtaking Rydquist and pushing the poleman back to fourth place.

Nick Wittmer then assumed the lead in TC in his Honda, but that didn’t last long as Toby Grahovec then took the top spot away, while at the same time Rydquist was closing in from third.

At the 10-minute mark of the 40-minute race, Grahovec was managing a nine-tenths of a second TC lead over Wittmer, with Rydquist closely following, with Rivera in fourth and Kozarov in fifth.

Rivera then got the better of his fellow Nissan driver, getting around Rydquist for third, while Grahovec’s lead was up to two seconds and growing over Wittmer as the race clock hit 16 minutes of the scheduled 40 minute race.

With 12 minutes to go, Kozarov moved into fourth, passing Rydquist who had a reported mechanical issue, which also promoted SheaHolbook, in the No. 67 Shea Racing Honda Accord V-6 Coupe, into the top five.

When the checkered flew, Grahovec scored his second career Pirelli World Challenge race win and claimed the first win for the new BMW M235iR in North America, with Wittmer bouncing back to finish second after Saturday’s mechanical problem and Rivera completing the podium with a third place run.

“It is awesome to win close to home,” said Grahovec. “We have about 60 family and friends here today and to win is fantastic. Both races this weekend were tough. I got lucky in traffic and got a little bit of a gap. Traffic is tough here with the B Spec cars and some of the TCA machines. You really have to be on the ball with the standing starts but I had a good one today. We’ll have a great party tonight after the win.”

“We had a similar problem with fuel starvation at the end but I was able to hold on and take the win this time,” said Wolfe. “We got another half-gallon in the car for this race. And Elivan made it interesting at the end too. I saw him right there in my mirror and it was a little scary. I didn’t want the same thing to happen again as Friday. The crew guys were pretty bummed after that finish. I’m very glad we got the win for those guys. This is the same car I drove last year and this time the car is handling a little better now. Elivan (Goulart) and I are pretty balanced right now so it will be battle all year. We each have a win and a second so far.”

On lap 9 in TCA, the lead battle became three wide with Goulart, Powell and Wolfe, with the three exchanging positions in two consecutive corners and Wolfe moving into the lead, earning him the Cadillac ATS-V Move of the Race Award.

TCA saw the last lap erupt into a drag race to the line, with Wolfe winning by a mere foot over Goulart for his 14th career win, and Bickers nosing out Powell for the final podium spot across the finish line.

In TCB, pole-sitter Ted Hough, in the No. 69 Breathless Racing Mazda 2, took the lead over Henry Morse, in the No. 14 Hale Motorsports Mazda 2, and Michael Johnson, in the No. 24 Tech Sport Racing Chevrolet Sonic.

TCB would see multiple lead changes as the top four cars ran in a swarm, nose-to-tail, with Groenke, O’Gorman, Rodgers and Hough trading the lead and all four spots back and forth.

Later in the race, Rodgers assumed the lead with a pass over O’Gorman, with Hough back in third and Blake Thompson, driving the No. 37 Black Armor Helmets Mazda 2, in fourth followed by Groenke.

The race continued to get interesting as Hough moved past O’Gorman into second and Morse then moved on Hough for third a few laps later while Rodgers continued to lead.

Aschenbach triumphs on his return to GTS