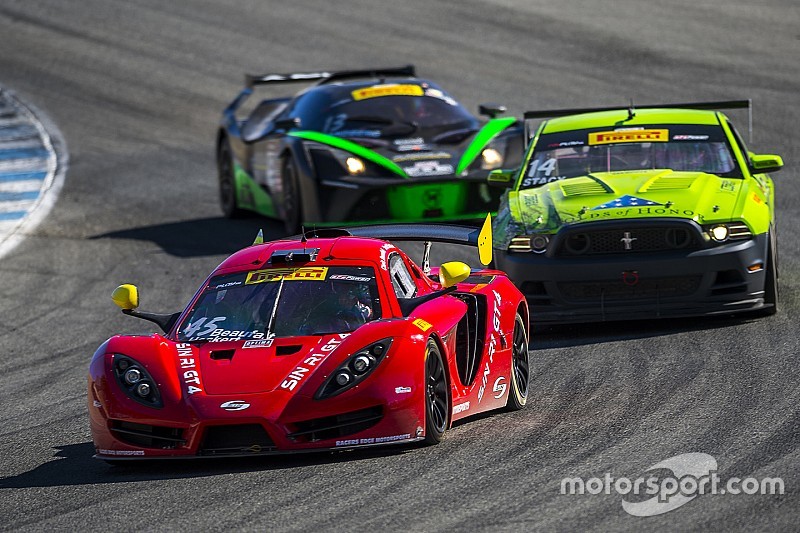 The second GTS race of Pirelli World Challenge’s finale at Laguna Seca saw Scott Heckert make up for yesterday’s DNF with a close victory in the SIN R1 over Andrew Aquilante in the Phoenix Ford Mustang.

From the standing start, polesitter Scott Heckert found the perfect amount of traction to send his SIN R1 straight into the lead, ahead of Parker Chase’s Ginetta.

With Roush’s Nate Stacy having to start at the back due to a crash in qualifying that obliged his team to change the car’s two front tires, it was up to Andrew Aquilante to uphold Ford Mustang honor at the front of the pack, and he did so. From third on the grid, despite making a slow getaway, he had the power to get around Parker Chase’s Ginetta exiting Turn 2, and that immediately wrongfooted Chase and put him under threat from first new GTS champion Brett Sandberg in the KTM XBow and then the Chevrolet Camaro of Lawson Aschenbach, who got around the KTM and up into fourth.

Following the restart, Aquilante threatened Heckert into Turn 2, but at the end of the lap, the Mustang ran wide at Turn 11, allowing Chase to muscle alongside, push the pony car slightly wide and grab runner-up spot. However, that lasted only as long as the length of the straight, as Aschenbach’s Camaro, which had also gotten past the Mustang, dived down the inside of the Ginetta into Turn 2 and took second place.

On Lap 6, Mantella’s KTM knocked hard into Balogh while grabbing fifth place and sent the Aston spinning down to 12th place, while also losing momentum himself. That allowed the recovering Aquilante, and the charging Scott Dollahite in the Lotus Evora up in to fifth and sixth. Behind, them Stacy was trying to mirror Dollahite’s steer from the rear of the field, and on Lap 9, the Roush Mustang was past Marshall’s Lotus and into seventh.

Up front, Heckert held a 4sec lead over the tight Aschenbach/Chase battle, while Mantella and Aquilante were dueling even harder for fourth, side by side in several corners around the 2.238-mile Mazda Raceway Laguna Seca. Sadly, both these battles were ruined on Lap 11, when officials decided (correctly) that Mantella was at fault for the earlier clash with Balogh and also that Chase should be punished for bashing Aquilante in his Turn 11 pass.

Mantella’s penalty was a slow drive down pitlane; Chase was ordered to drop behind the Mustang, which by this stage required him backing off to the tune of seven seconds to allow Aquilante to catch back up. A strange scene.

By half-time in the 50-minute race, Heckert’s lead had steadied at just under four seconds, while Aschenbach was five seconds ahead of Aquilante with Chase sitting 2sec behind. Four seconds further back, Dollahite’s Evora sat in fifth but with Stacy’s Mustang painting his mirrors green. Into Turn 2 on Lap 17, Stacy made his move, and although he slightly overcooked his entry, he made the ponycar wide enough on the apex to keep the nimble Lotus behind.

Then, drama! A second full-course yellow flew on Lap 18, as Aschenbach’s Camaro ground to a halt on the pit straight, needing attention in the cockpit and under the engine bay from the fire marshals. The #10 Blackdog Speedshop Camaro, so often a factor in these races, deserved a better season-closer than this.

The restart with 16 minutes to go inevitably saw Aquilante try around the outside of Heckert into Turn 2 – to no avail. Behind them, a similar battle saw Chase getting defensive on fellow teenager Stacy, but the Mustang took the inside line into Turn 5 and up the hill powered past the Ginetta to grab third.

Right behind them, Dollahite initially tried to take advantage of Chase’s lost momentum, but simply didn’t have the car to do it, and instead had to switch his attention to trying to hold off the second Ginetta of Harry Gottsacker. This pair were chased hard by Jeff Courtney’s Maserati Gran Tursimo which ran ahead of Marshall’s Lotus, Gaples in the second Camaro, and the recovering Balogh. The Aston moved into ninth on Lap 24.

With 10mins to go Heckert was only just keeping Aquilante’s Mustang behind, while nine seconds behind by now, Stacy’s Mustang couldn’t shake off Chase’s Ginetta. Chase was fighting Stacy in a very intelligent way, braking earlier into the top of the Corkscrew so as not to allow the less nimble Mustang to limit the Ginetta’s corner speed down through the turns. As a result, Chase carried more momentum all the way through to Turn 11, and the tactic looked like it would work at the end of Lap 29, until Chase decided he wasn’t quite close enough to make an outbraking maneuver. Having already been pinged by rulemakers for being too tough, it was probably a wise decision.

Although this pair had fallen a long way behind the lead battle, they were also comfortably clear of Dollahite, Gottsacker and Courtney who were covered by just one second, and eventually changed order when Gottsacker got past the Lotus to make it two Ginettas in the top five.

The Heckert/Aquilante battle ran to the checkered flag with the SIN finishing 1sec ahead, having led from start to finish. It went a long way toward making up for Heckert’s disappointment when the car expired yesterday while leading.

Stacy held off Chase to the finish line, by 0.666, and they were chased home by Gottsacker, Dollahite, Courtney and Balogh’s Aston Martin, as he demoted Marshall on the very last lap.

DASH: A note from the Hobgood Family