LEXINGTON, Ohio - The Cadillac Mid-Ohio Grand Prix Presented by StopTech features a huge, 55-car entry and a doubleheader of races for the GT, GTS and Touring Car classes representing Rounds 10 and 11 for all three classes. 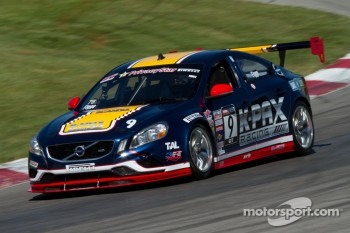 Alex Figge will look to repeat his 2011 victory at Mid-Ohio this weekend.

A pair of Cadillac racers sits atop the GT driver standings heading to Mid-Ohio. Johnny O'Connell, of Flowery Branch, Ga., leads the way on the strength of three victories and a total of seven podium results from nine starts in the No. 3 Cadillac Racing CTS-V.R. O'Connell also won the second race of the 2011 Pirelli World Challenge doubleheader at Mid-Ohio.

O'Connell leads Andy Pilgrim, of Boca Raton, Fla., by 177 points, 1083-906, in the GT driver standings. Pilgrim owns one victory and top-five results in eight of nine races this year in the No. 8 Cadillac Racing CTS-V.R. This weekend's field will include a third entry from Cadillac Racing in Jordan Taylor, of Apopka, Fla. The young-but-experienced second-generation road racer will make his first start aboard the No. 5 Cadillac Racing CTS-V.R.

Lawson Aschenbach, of Darnestown, Md., is currently third in the GT championship and leads the Porsche contingent in the No. 1 Privacy Star/Entrust/TruSpeed Porsche 911 GT3. Aschenbach has finished inside the top five in every one of his eight starts this season and scored a victory after starting from the pole position in Round 2 at St. Petersburg in March.

Mike Skeen, of Charlotte, N.C., heads to Mid-Ohio after victories in both races of the most recent World Challenge doubleheader at Canadian Tire Motorsport Park. Skeen also claimed a GT victory at Mid-Ohio in 2010 and will pilot the No. 2 Hawk Performance Nissan GTR in one of two entries from CRP Racing. Jason Daskalos, of Albuquerque, N.M., will drive the No. 12 Hawk Performance Nissan GTR.

Tony Gaples, of Libertyville, Ill., currently stands eighth in the GT driver standings and will once again field the No. 11 Black Dog Racing Chevrolet Corvette, the lone Corvette in this weekend's field. James Sofronas, of Newport Beach, Calif., took a GT victory from Mid-Ohio in 2010 and will look to return to victory lane this weekend in the No. 14 Global Motorsports Group/Swisher Racing Audi R8, which is the only Audi in the GT field. Fred Roberts, of Toronto, Ontario, Canada, will field the No. 89 Direct Energy SRT Dodge Viper Competition Coupe, completing the GT entry.

Pirelli World Challenge GTS It's still anybody's race in the battle for the GTS championship with three races remaining on the 2012 World Challenge schedule. Andy Lee, of Colorado Springs, Colo., currently leads the way with 981 points, but Peter Cunningham, of Milwaukee, Wis., is right on his heels with 970 markers.

Jack Baldwin, of Marietta, Ga., is currently third in the GTS driver standings on the strength of a victory on the streets of Long Beach and seven top-five results. He is no stranger to racing at Mid-Ohio Sports Car Course and this weekend will lead the Porsche stable in GTS driving the No. 68 Team Hot Wheels/Invoice Prep Porsche Cayman S for GTSport Racing.

Other GTS Porsches include the No. 60 Napleton Porsche Cayman S for Kevin Gleason, of Johnstown, Pa., and the No. 37 Wossner/Performance Racing Oil Porsche 996 for Karl Poeltl, of Knoxville, Tenn.

Michael Galati, of Olmstead, Ohio, is another driver with a strong record of World Challenge success at Mid-Ohio with three previous class victories at what is now his "home" track. He'll lead the Kinetic/Kia Racing effort this weekend in the No. 36 Kia Motors America Kia Optima alongside Canadian racer Mark Wilkins, who now makes his home in Aurora, Colo. Wilkins will drive the No. 38 Kia Motors America Kia Optima.

Paul Brown swept the GTS class in last year's Mid-Ohio doubleheader. This year, Justin Bell, of Los Angeles, Calif., will be looking to keep the Paul Brown Racing Mid-Ohio winning streak intact aboard the No. 50 eBay Motors Ford Mustang Boss 302S. Bell swept the 2012 season-opening doubleheader at St. Pete, has four top-five results from his seven starts this season, and leads a herd of Mustangs into Mid-Ohio.

Alec Udell, of The Woodlands, Texas, will drive the No. 16 Lebouf Brothers Towing/Amsource Capital/KART NATION Ford Mustang Boss 302R; with Jason von Kluge, of Ann Arbor, Mich., in the No. 19 Steeda Autosports Mustang; and Aaron Povoledo, of Toronto, in the No. 26 Picture Cars East Mustang Boss 302S. Povoledo took the Touring Car victory in the season race of last year's Mid-Ohio double.

Other Mustangs include Dane Moxlow, of Grosse Ile, Mich., in the No. 48 Trenton Forging/Bard's Beer Mustang Boss 302S; Richard Golinello, of Tampa, Fla., in the No. 55 Grand Sanitation Mustang; and Brad Adams, of New Orleans, La., in the No. 96 Voodoo/DatDog/Yo MTV Raps! Mustang FR500C.

There will be a pair of Nissan 370Zs in this weekend's field - the No. 51 Nissan/SPL Pro/Sparco/Motul 370Z driven by Ric Bushey, of Virginia Beach, Va.; and the No. 07 Nissan/DXD Clutches/UpRev Nissan 370Z for Brian Kleeman, of Towson, Md. - and four BMW M3s. Three M3s will race out of the Fall-Line Motorsports stable: the No. 57 BePOSITIVE.org/JetSet Magazine BMW M3 for Al Carter, of Greenville, Del., Mark Boden, of Winnetka, Ill., in the No. 58 BCKSTGR/Fall-Line Motorsports BMW M3; and Charlie Putman, of Mills, Wyo., in the No. 59 Safecraft/OMP/Fall-Line BMW M3. The fourth BMW in the field is the No. 62 Premier Copier/Schomp BMW M3 driven by Mark Klenin, of Lonetree, Colo.

Cooper will look to add to his win total aboard the No. 03 Mazdaspeed Motorsports Mazdaspeed 3, the lone such vehicle in the TC field. Also fielding a Mazda will be Carl Rydquist, of Redondo Beach, Calif., in the No. 97 R2EI.com/City Tire Online Mazda RX-8.

Fittingly, given Mid-Ohio Sports Car Course's proximity to major Honda manufacturing facilities in Ohio, there are more Honda Civic Sis than any other vehicle in the TC field. In addition to the four from Compass 360, Peter Schwartzott, of Freeville N.Y., will compete in the No. 41 Peter Schwartzott Racing Civic Si; Bob Roth and Branden Peterson are both listed as drivers of the No. 64 COMCLUCH/BC RACING/HASPORT Civic Si; and David Tuaty, of Miami, Fla., will drive the No. 69 TLMUSA/Mesa Balancing Honda Civic Si.

There will be a total of six Volkswagens in the TC field this weekend. Leading the charge will be Tristan Herbert, of Reston, Va., who took Round 5 at Miller Motorsports Park earlier this year in the No. 33 HPA/RennGruppe/Brimtek/SGRacing Volkswagen Jetta GLI. APR Motorsport fields an intriguing, two-car lineup with Ian Baas, of Noblesville, Ind., entered in the No. 49 APR Tuned/Motul/Rays Volkswagen Jetta GTI; and Venezuelan Alex Popow driving the No. 94 APR Tuned/Motul/Rays Jetta GTI.

Both of this weekend's races will be broadcast live on www.world-challengetv.com. Additionally, NBC Sports will air the races on Saturday, August 25 at 1:30 p.m. (EDT).

Cadillac enthusiasts have a commanding lead in manufacturers’ fan championship