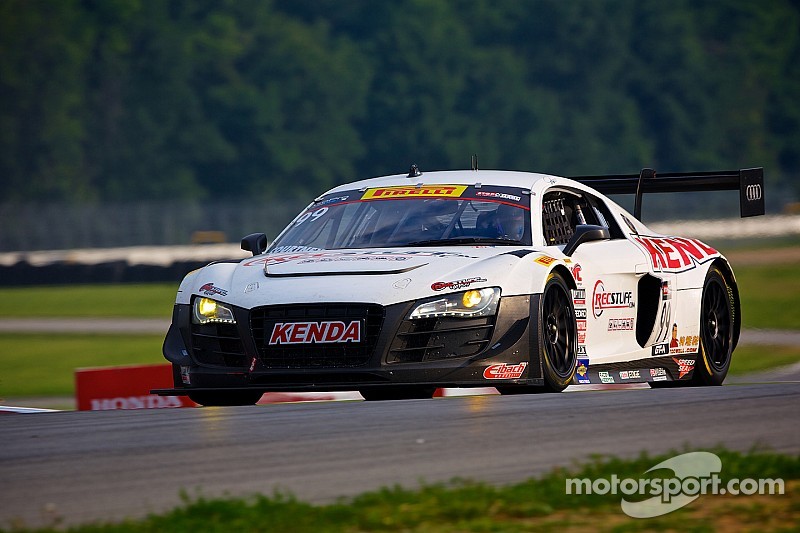 The field raced under a green flag for only 13 laps before the skies opened and it began to rain.

Courtney qualified the No. 99 Kenda Tire/RecStuff.com Audi R8 Ultra in Sixth position for Saturday’s race.  The field raced under a green flag for only 13 laps before the skies opened and it began to rain. Only three laps later the field was placed under a full course caution for wet conditions.  Ultimately, the race was red flagged with Courtney in the seventh position.

“We took a gamble by pitting early when the rain hit to switch from racing slicks to rain tires,” said Courtney. “We were hoping this move would put us at the front of the field when the other teams had to pit later for rains, unfortunately our decision backfired when they red flagged the race.”

The grid for Sunday’s race was set according to Saturday’s fast laps and Courtney was in fifth position. An early double yellow set up contact that knocked the Audi’s front end out of alignment, leaving Courtney to struggle with the handling of the car for the remainder of the race. Courtney was able to bring home a seventh place finish.

“I had a slow exit out of turn 1 on the restart and that set us up to be sandwiched by two other GT cars going into turn 2 we were hit pretty hard entering turn 2 knocking the front out of alignment it was pretty tough sailing from then on,” said Courtney. “It was a rough outing all weekend, after getting hit in Sunday’s race; any podium chances were gone and we just finished the best we could. As always we learned a few things this weekend that will help us down the road.”

In addition to racing, Courtney and the JCR Motorsports team played host to, customers, employees and guests of Kenda Tire, whose US Headquarters is in nearby Reynoldsburg, Ohio.

“We entertained our guests from Kenda Tire with a cookout after Saturday’s race,” said Courtney. “We appreciate them sticking around and braving the rough weather, it was great to have them at the track.”

Rounds 11 and 12 of the Pirelli World Challenge Championships at Mid Ohio will air on NBC Sports on Sunday, August 10 at 1:30 p.m. EST.