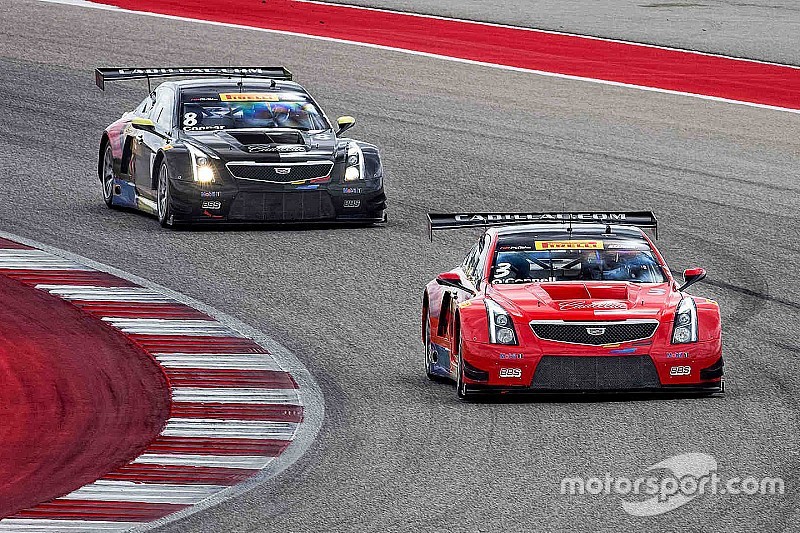 Long exited the #31 car under his own power immediately following the incident.

On the restart with 40 minutes to go, Davison took the lead from his Nissan teammate but was soon issued a 10-second stop-and-go penalty for avoidable contact with Long off the start. That penalty gave Heitkotter the lead over Cadillac teammates Johnny O’Connell in the #3, and Michael Cooper, in the #8, with Alvaro Parente, in the #9 K-PAX Racing McLaren 650S, behind them.

The 20-minute mark of the race saw Heitkotter continue to manage a five-tenth-of-a-second lead over O’Connell, with Cooper and Parente following. In fifth it was Andrew Palmer, in the #87 Bentley Team Absolute Bentley Continental GT3, who was just ahead of Kyle Marcelli, in the #2, CRP Racing Audi R8.

With 17 minutes to go, O’Connell pounced going through turn 13, passing Heitkotter for the lead and then pulling a gap. The pass earned O’Connell the Cadillac ATS-V Move of the Race Award.

That allowed Cooper to challenge Heitkotter for second as Parente also closed on and passed the pair of them. Through Turn 12, Palmer followed Parente, while Heitkotter slowed and then entered pit road with a suspected flat tire.

But moments later, Parente and Palmer were penalized for exceeding track limits, leaving Cooper to complete a Cadillac 1-2

Joining them on the podium was Jon Fogarty after a remarkable performance in the #99 Gainsco/Bob Stallings Racing McLaren 650S GT3. The former IMSA Rolex Series champion carved his way forward from 13th on the grid to fourth and with six minutes to go, used traffic to his advantage, to pass Marcelli for third.

The last lap saw Marcelli lose another place to another McLaren 650S GT3, that of Colin Thompson.

In GTA, class polesitter Martin Fuentes, driving the #07 Scuderia Corsa Hublot Under Armor Ferrari 458 Italia, led from start to finish. He stretched the lead to as much as six seconds, before Frankie Montecalvo closed in driving the #66 DIME Racing Dime R&D Mercedes AMG SLS GT3.

However the Benz would get no closer than 2.5sec. Third went to Michael Mills in a BMW Z4.

Sandberg wins GTS round 2 at COTA