Robert Stout will take on the Mid-Ohio Sports Car Course with improvements after the Lime Rock Park event.

Fresh off of a double race weekend at Lime Rock Park and an 11th place finish in Round 8 of the Pirelli World Challenge GTS Championship – Ken Stout Racing’s best finish to date – the team is looking forward to their next series race weekend at Mid-Ohio Sports Car Course, August 2-4. Robert Stout, driver of the newly developed No. 86 Scion FR-S that is supported by Lucas Oil, TRD, Eaton Corp. and E3 Spark Plugs, finished just outside of the top 10 in the 25-car GTS field at Lime Rock Park. 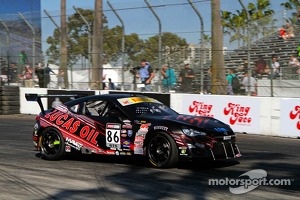 “It’s been a battle, but we finally had things go our way some at Lime Rock,” said team principal Ken Stout. “With the addition of tuner Shane Tecklenburg to the team we were able to put some of our fuel delivery issues behind us and the car performed great in race one (Round 8) of the double header weekend. We were good right out of the box and ran in the top 10 all weekend. It was a great boost of confidence for the entire team!”

In qualifying, Stout put the KSR Scion FR-S 9th on the grid and during the Round 8 race on July 5th had the car as high as 5th after an exceptional start. Stout settled in and was able to maintain a strong 8th place for most of the race. Unfortunately some contact with a GT car dislodged the exhaust pipe from the muffler and during a late caution flag that lasted for five laps exhaust fumes filled the inside of the car rendering Stout all but done. Between the exhaust fumes and ambient temps of 96 degrees Fahrenheit in the shade and approaching 150 in the car, Stout managed to hang on till the end but gave up three spots due to exhaustion. He had to be pulled from the car and was sent directly to the at-track medic center where they said his vitals were so low any average person would've passed out. After some A/C and lots of water he was good to go for day two and Round 9 of the GT/GTS Championship on July 6.

“I was fine even without a cool suit in the car until that caution came out,” said the 2010 Pirelli World Challenge Touring Car Champion. “Once we slowed down (for the caution) and the air movement in the car stopped it was horrible. By lap three of five for the caution, I just couldn’t breathe any more as the fumes completely filled the car. Dad told me to pull it in, but this team and these guys have worked so hard, sponsors and partners have provided so much support I just couldn’t find it in myself to stop. We were sitting in the top 10 for the first time this year after 35 minutes of racing, and there was no way I was quitting early.”

Watch the video from Round 8 at Lime Rock http://youtu.be/KHw7xqS_gJc

After Round 8, repairs were made to the exhaust system and a cool suit added to the car for the driver with a cold fresh air system being pumped to Stout's helmet. Unfortunately he wouldn't need it for very long. After surviving a hard hit at the start of Round 9 while dodging a stalled Kia and a cautious turn one where a few drivers went off, Stout started picking off cars passing two BMW's in the first lap. While pressuring a Nissan 370Z for a few laps the serpentine belt released and ended the team’s run early.

“We've been beaten up a bit and might have a bloody nose but we have also made huge strides forward,” said Ken Stout. “We still have a lot to learn with the engine program of this car but we know for sure we can now compete in the top 10 of the Pirelli World Challenge Series GTS class against some of the best sports car teams in the industry, a feat that many said was not possible. We also know how much potential the Scion FR-S has and see no reason why we can't compete with the leaders in the future.”

Video of the start of Round 9 at Lime Rock, hold on! http://youtu.be/U3WOXQpYJDA

KSR thanks and introduces you to their small but very capable crew.

Eric Arms and Mark Canup have built KSR’s Scion FR-S from the ground up. They have spent countless hours preparing, building, fabricating and repairing the car and the team could not go racing without them! They are great friends and incredibly talented.

On race weekends KSR is also joined by data engineer Garrett Gresham who monitors all the engine vitals and makes any necessary changes along the way. He is also not afraid to get his hands dirty with what ever needs to be done outside of his department.

Daniel Filbey is a volunteer in his first year of college. He and Robert went to high school together only to find out after they became friends that Daniel's father was the team manager for Chip Ganassi's Indy car team when Alex Zanardi and Robby Gordon were behind the wheel. As a side note, Daniel's uncle is Dan Binks. Dan is the current Team Manager for GM's ALMS Corvette team so needless to say racing’s in Daniel's blood and he's a great young man!

As mentioned at the top, Shane Tecklenburg is KSR’s tuner and the beauty of computers is it can all be done remotely. With the help of Garrett and Eric on site, it has been a great combo.

Special thanks to Quirt Crawford who is building our engines and helping us through some tough times with his years of knowledge.

None of this would be possible without all of the KSR partners and their support!

The next stop for the KSR team is at Mid-Ohio Sports Car Course, August 2-4 and they’d love to see you there.