BIRMINGHAM, Ala. – Anthony Lazzaro and Nick Mancuso made it a pair of wins for R. Ferri Motorsports in GT and GT-A, while Mark Wilkins made it back-to-back wins in GTS for Kia Racing/Kinetic Motorsports at the Pirelli World Challenge Barber Motorsports Park Presented by RECARO, Round 3 of the 2014 season.

Lazzaro, of Atlanta, Ga., took his first series win in the No. 61 R. Ferri Motorsports Ferrari 458 Italia GT3, which improves on his results of fourth and third in the first two races of the year. On Saturday, after starting second, Lazzaro ran behind teammate Mancuso all day but made a sterling pass through traffic on Lap 17 to take the lead.

While the pair was going through slower cars, Lazzaro made it to Mancuso's outside, but the inside of a slower car, to gain the lead through the left-handed Turn 5 hairpin to secure the top spot, a spot he held until the end of the 32-lap race. The pass netted Lazzaro the Invisible Glass Clean Pass of the Race.

"It came down to traffic, it was very hard to pass and super, super tight racing," Lazzaro said. "It was a great race. Once I got out in front I thought I could pull away, and fortunately that happened. 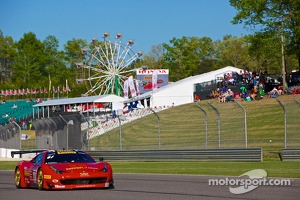 "It's a huge deal for Remo (Ferri) to come to the third race and podium with both cars, after having both cars on the front row," he added. "We knew we'd be good here. We had a great setup for the race; it's the best yet we've performed." Mancuso, of Chicago, ultimately fell back to third overall, but still top GT-A classified driver in the No. 16 R. Ferri Motorsports Ferrari 458 Italia GT3. He started on the Motul Pole Position for the first time this season.

He nearly got second back from Long Beach winner Johnny O'Connell, of Flowery Branch, Ga., in the No. 3 Cadillac Racing Cadillac CTS.V-R on the final lap. Mancuso dove to the inside at Turn 5 of O'Connell, but his line ran wide and O'Connell held onto the position. "At the end there, I had to try it. I would have stayed up all night thinking about it if I didn't," Mancuso said. "But it's definitely a great day when you can get two podiums in the same day for the first time."

O'Connell, who climbed to second after starting eighth, praised his Cadillac's starting ability to help gain the positions. But it was a move for second into Turn 2 in a crowded battle for podium positions on a Lap 22 restart that netted him the Cadillac CTS-V Move of the Race.

"I'm exhausted. But really the team won it for us," O'Connell said. "What Cadillac does, more than others, is work on our launches. Going from eighth to third, that was it.

"But for that caution, we would have been toast," he added. "That allowed me to bring my tires back. I was falling into their clutches. Mike Skeen was strong. Then the battle there with Mancuso, that was awesome. Most fun I've had in a long time.

The battle from fourth through seventh was no less intense. James Sofronas, of Villa Park, Calif., ended fourth with his best result of the season in the No. 14 Spyder/The Thermal Club Audi R8 Ultra. In fifth was Andy Pilgrim, of Boca Raton, Fla., in the No. 8 Cadillac Racing Cadillac CTS.V-R.

Mike Skeen, of Charlotte, N.C., equaled his Long Beach finish with sixth in the No. 2 CRP Racing Hawk Performance Audi R8 Ultra, while Tim Bergmeister, of Langfeld, Germany, had his best result of the year in the No. 31 EFFORT Racing Porsche GT3 R, with a seventh.

With Mancuso third, the remaining two podium finishers in GT-A were Tim Pappas, of Boston, Mass., in the No. 54 Black River Caviar Mercedes-Benz SLS AMG GT3 and Henrik Hedman, of Ft. Lauderdale, Fla., in the No. 10 DragonSpeed Ferrari 458 Italia GT3. Pappas and Hedman finished eighth and ninth overall.

"We're chipping away," Pappas said. "We hadn't figured out how to make the rear of the car work. But the second half of the race, it was magic. We could have kept going and going on these tires." 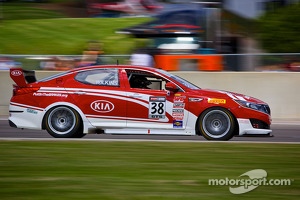 "Yeah Jack and Nic had a good battle going. It was after one of the restarts," Wilkins explained. "Everyone was very aggressive and they both vied for the same real estate." But from third on the grid, Wilkins was pleased to deliver a result not far from where the Optimas are built. "My goal was to run a really clean race," Wilkins said. "It's a great result for Kia after Long Beach and for West Point, Ga., where most Optimas are built."

Baldwin ended third when all was said and done, for his second podium finish of the season. "We had a great car and a winning car today. But it was a tough battle between Nic and I that ended with contact," Baldwin said. "It's going to mean another tough night for this crew putting the car back together, but I've got all the faith in the world that this Goldcrest Motorsports crew can do it again and we'll have the No. 73 RESET-MD/Motul/StopTech Porsche Cayman S ready in time for tomorrow's race."

Scoring his third top-five finish in as many races to open the season, one of only two drivers in GTS to do so (Roush Jr.), was Tony Buffomante, of Naperville, Ill., in the No. 33 Capaldi Racing/Ford Racing Ford Mustang Boss 302S. Buffomante started 12th and enjoyed a trouble-free drive through the field, although he called it a "battle" post-race. He earned the Sunoco Hard Charger Award this race with that gain of positions.

Rounding out the top five was the similar car of Alec Udell, of The Woodlands, Texas, in the No. 17 Watson Racing Ford Mustang Boss 302S. After starting ninth, this is Udell's second straight top-five finish.

Two cautions interrupted the 50-minute race, run under sunny skies with an 82 degree ambient temperature. On the opening lap, Brad Adams, of New Orleans, La., was stuck in the Turn 2 gravel trap in the GTS class No. 96 Voodoo Music Experience/DatDog/Yo MTV Raps Ford Mustang Boss 302S, but was removed. The same story applied to GT-A classified driver Marcelo Hahn, of Sao Paulo, Brazil, in the No. 0 Reiter Engineering Lamborghini Gallardo FL2, just past the halfway point.

Of note, Mitch Landry, of Lake Charles, La., secured the Optima Batteries Best Standing Start with a gain of nine positions in the No. 97 VersaCrane/DeepSouth Ford Mustang Boss 302S. Landry ended the race 14th in the GTS class.

Points and results are provisional following today's race. GT sees Lazzaro with 325 point, Pilgrim with 304 and O'Connell with 298. Mancuso is now tied with Andrew Palmer for fifth overall on 224 points, and Mancuso is the top-rated GT-A driver.

Lazzaro, Mancuso, Wilkins score Barber win in round 3 on Saturday