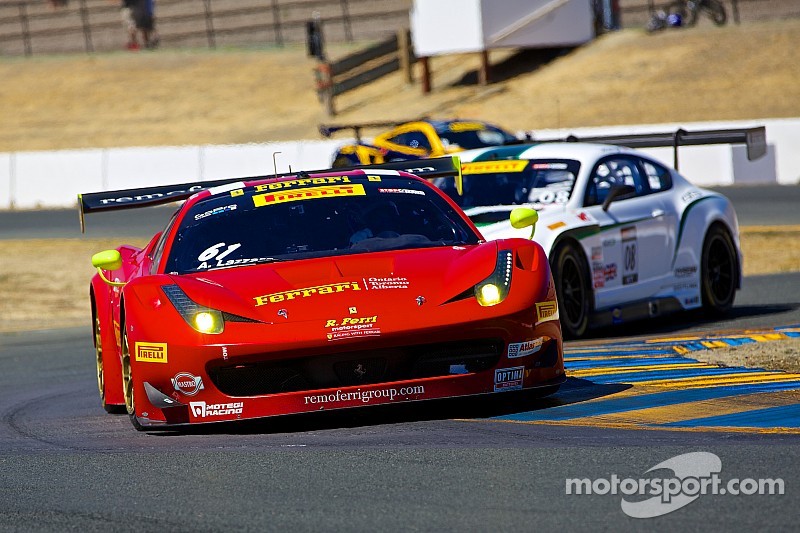 Lazzaro (in photo) took his second win of 2014, Aschenbach his fourth, in Sunday's 50-minute race. Round 14 of the 2014 season was part of the GoPro Grand Prix of Sonoma weekend at the 2.385-mile Sonoma Raceway.  The GT class action featured several high and low points, with the standing start of the 50-minute race proving one of the race's deciding moments.

By the end of the first lap, Lazzaro, in the No. 61 R. Ferri Motorsports Ferrari 458 Italia GT3 was ahead of Ryan Dalziel, of Winter Park, Fla., in the No. 31 EFFORT Racing Porsche GT3 R and Robert Thorne, of Littleton, Col., in the No. 6 K-PAX Racing McLaren 12C GT3. The three of them ran unchallenged for most of the rest of the race.

The battle behind them for fourth featured a great scrap between GT points leader Johnny O'Connell, of Flowery Branch, Ga., in the No. 3 Cadillac Racing Cadillac CTS-V.R and Mike Skeen, of Charlotte, N.C., in the No. 2 Hawk Performance Audi R8 Ultra. Several times between Laps 2 and 19, Skeen made attempts to pass O'Connell but was unable to fully complete a move.

While they battled, it brought others back into contention. Mike Hedlund, of Woodside, Calif., in the No. 77 Scuderia Corsa Ferrari 458 Italia GT3 had his second successive stellar drive in his first weekend with Scuderia Corsa. After dispatching of both Bentleys, Hedlund made it past both O'Connell and Skeen for fourth place on Lap 18.

Leitzinger makes 'move of the race'

A lap later, on Lap 19, Leitzinger made a move to the outside of both O'Connell and Skeen around the right-handed Turn 7 hairpin for fifth. The two-in-one move netted the Bentley driver the Cadillac CTS-V Move of the Race award.

O'Connell and Skeen had several instances of contact throughout their dice for fourth. On Lap 21, Skeen's race ended with a flat left rear tire, and he was forced to pit. That dropped him to an eventual 19th place finish, while O'Connell was able to continue home to the finish in eighth place.

What was still setting up for a good finish – Thorne had to hold off both Hedlund and Leitzinger's advances for the final podium position – ended abruptly on Lap 23 following a heavy accident for Dean Martin, of Westland, Mich., in the No. 50 Picture Cars East/Rehagen Racing Ford Mustang Boss 302S.

Martin's right rear tire blew as he headed up the hill into Turn 1, which spun him into the wall. That brought out the second and final full course caution of the race, ultimately forcing the race to end under caution. Martin was evaluated and released from the infield medical center.

Lazzaro won overall and in GT at an average speed of 71.786 mph, with a winning margin of victory under caution of 2.519 seconds.

"Starting with yesterday, we had a puncture. Bad luck. I've raced 30-odd years and it can't be more than five flats, and this year alone I've had two," Lazzaro said. "The car's been perfect all weekend. Any day you're driving a red Ferrari it's a great day. Championship-wise, I don't really care anymore. I don't even know how we got to third. From here on out, it's all about race wins, and we got another one today."

Dalziel finished second to continue his streak of podium finishes. He has four in his first four starts in Pirelli World Challenge this season. Meanwhile Thorne adds his second podium of 2014, having also finished second at Round 7 at Road America in June.

Hedlund posted a season-best fourth place and Leitzinger was fifth. In sixth, James Sofronas, of Villa Park, Calif., in the No. 14 Spyder/The Thermal Club Audi R8 Ultra, continued his run of consecutive top-10 results – he has ended top-10 in all 14 races in GT this season, the only driver to do so.

In seventh overall, von Thurn und Taxis scored an overdue first GT-A win, in the No. 24 Reiter Engineering Lamborghini Gallardo FL2. He'd enjoyed a battle with most of the overall GT class competitors throughout the race, and posted a career-best finish in his last scheduled race this season.

"Today was such a great race," he said. "We understood something about this beautiful, beautiful track. To be honest, I was not exactly aware where I was in the race, who I was racing, but I was just completely in the zone, enjoying myself."

GTS saw its race, like GT, largely come down to how well the competitors handled the start. Motul polesitter Jack Baldwin, of Marietta, Ga., in the No. 73 RESET-MD Porsche Cayman S, lost the lead off the line as he had to take evasive action to avoid Andrew Palmer, of Chicago, in the No. 21 GMG Racing Audi R8 Ultra, who'd stalled on the line.

Lee's start was particularly impressive, as he gained nine spots off the line to secure the Optima Batteries Best Standing Start award.

Aschenbach seized the lead with a pass on Lee on Lap 3, as the pair of Camaros exited Turn 11, made it through start/finish and headed up the hill. This was awarded the Invisible Glass Clean Pass of the Race award.

Lee and Wilkins ran second but Baldwin, who had the measure of the GTS field on pace all weekend, was able to close and repass the two in front of him.

Martin's accident stopped Baldwin from having a chance to catch Aschenbach and sweep the weekend, but it was still a good comeback drive from the veteran. Aschenbach's winning margin under yellow was 1.471 seconds.

"It comes down to execution. That's half the battle," Aschenbach said. "We came to a track that's low grip, with a lot of elevation changes. It's not a great place for us. We made so many changes over the course of the weekend, and finally hit the nail on the head.

"Anytime you use a car for a pick, it's usually last minute," he added of his winning pass. "I got a great start and Andy got by me. I tried to stay patient, but I was able to get him on the outside of the final corner, so a good inside line on the front straight. It wasn't the easiest pass but he raced me clean."

Baldwin was second, for his sixth podium of the season, while Lee added his third of the year in third place. For Lee, it marked his first trip to the top three since Round 7 at Road America.

Points leader Wilkins continued his consistent run of finishes with fourth. Joey Atterbury, of Rochester, N.Y., banked his fourth top-five finish in as many starts this season with fifth place in the No. 33 Capaldi Racing/Ford Racing Ford Mustang Boss 302S.

Of note, Brian Kleeman, of Baltimore, Md., in the No. 07 Nissan/DXD Clutches/Aeromotions Nissan 370Z was the Sunoco Hard Charger for a second straight day. Kleeman gained 10 positions from his starting position and ended a season-best 10th in GTS, for his first top-10 result of the season.

Results and points are unofficial until posted as final. Unofficially, O'Connell will hold a 42-point lead on Skeen (1376-1334), while Audi will retain its lead over Cadillac in the Manufacturer's Championship.

In GTS, Wilkins should hold an 80-point lead on Aschenbach (1333-1253) with Baldwin just under 200 points back, unofficially on 1139. Kia will retain the GTS Manufacturer's Championship lead.

Michael Mills, of Angleton, Texas, still leads the GT-A points standings on the strength of a 12th place overall finish, fourth in GT-A, in Round 14. The driver of the No. 41 EFFORT Racing Porsche GT3 R finished ahead of all his full-season competitors; none of Sunday's podium finishers is in realistic championship contention.

The Cadillac Grand Prix of Sonoma races will air Sunday, August 30, at 1 p.m. ET on NBCSN. Meanwhile the Pirelli World Challenge concludes its 2014 season at Miller Motorsports Park, Sept. 12-13, in Tooele, Utah outside Salt Lake City. The GT, GT-A and GTS classes will run Rounds 15 and 16.