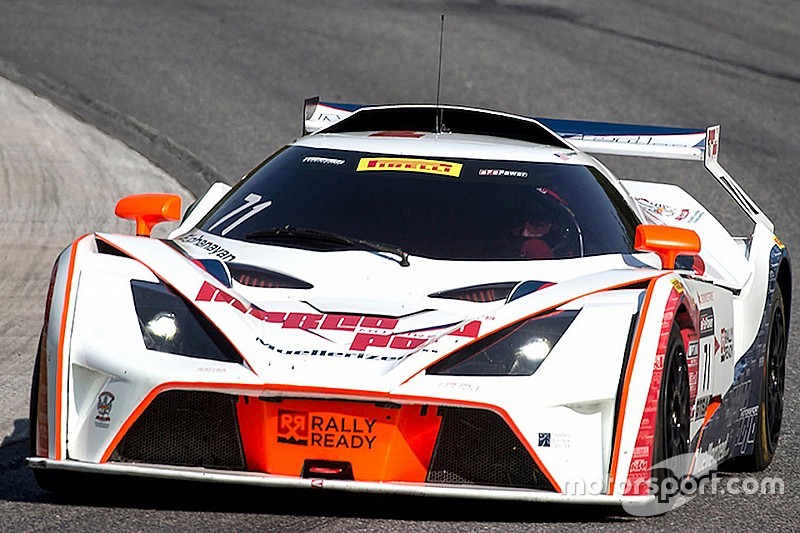 A late-race problem thwarted Nicolai Elghanayan’s effort to sweep both GTS SprintX Pirelli World Challenge races in his KTM X-bow at Lime Rock on Monday, having dominated the opening race of the double-header.

In the morning’s race, Elghanayan lost the lead early on to Moritz Kranz (Porsche Caymen) but a rapid pitstop helped the former Lotus racer to a first win with his MarcoPolo Motorsports team.

There was early drama for the Blackdog Camaro team, as Andy Pilgrim was spun around in front of the pack, causing lots of damage to the car he shared with Lawson Aschenbach, and they could only recover to finish 14th.

The race ended under caution after a collision between Christian Szymczak and Aurora Straus sent both hard into the tyrewall.

The afternoon’s race also went quickly under caution, which led to a lengthy delay, the race restarting with 34mins to go. The Audis of Ryan Eversley and Colin Braun attacked leader Elghanayan hard in the early stages, with the Panoz of Ian James tracking their every move.

Elghanayan was the first of the frontrunners to pit, while Braun was in next to, to hand over to George Kurtz, and Eversley subsequently gave up the lead, but his pitstop to handover to Adam Merzon didn’t quite go to plan.

After the pit sequence played out, Elghanayan emerged with a 9s lead over Keegan, who took over the Panoz from James. Staveley was on a charge, and passed the Panoz to put him second.

Elghanayan was well ahead when his car suddenly slowed with just two minutes remaining, handing the win to Staveley, ahead of Keegan/James who claimed the Pro-Am class win in third.

Kurtz and Merzon collided, allowing Travis/Hart to finish third, ahead of Kranz/Castro.

Elghanayan coasted across the finish line in ninth.