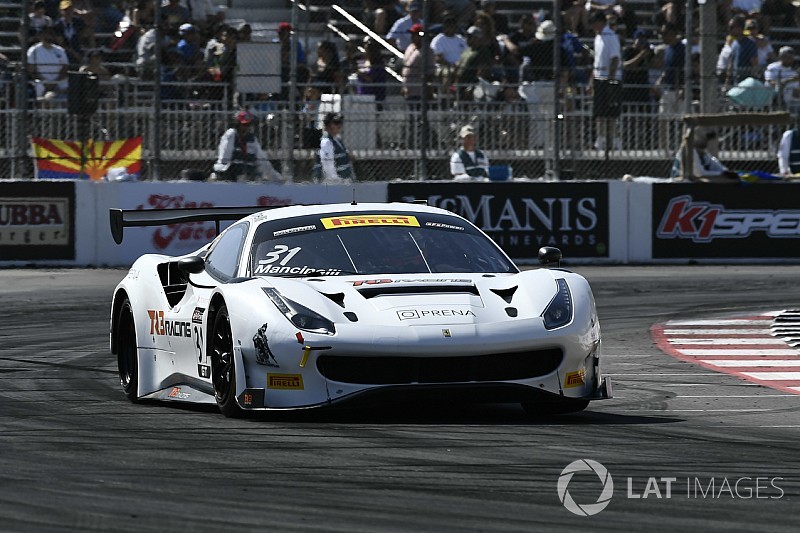 Toni Vilander was the record-setting polesitter for R. Ferri Motorsports, but it was Daniel Mancinelli whose TR3 Ferrari 488 who conquered on raceday, after a long caution period reduced the 50min race to 32 laps.

The crucial move came at Turn 1 on Lap 27, with Mancinelli making a late lunge down the inside under braking, the two Ferraris making light contact but both scrambling through untidily, white Ferrari now leading red Ferrari.

Mancinelli then pulled away over the remaining five laps of 1.968-mile course to claim the win by 2.179sec.

Scott Hargrove and fellow 911 driver Michael Christensen collided at the hairpin on Lap 24, thankfully without making contact with the wall, but one which left Hargrove temporarily sideways across the track. Christensen was blamed and when he served his drive-through penalty, that elevated K-PAX Racing’s Alvaro Parente onto the podium, although the Bentley Continental finished some 16sec adrift of the winner.

Hargrove recovered to finish fourth, six seconds ahead of the leading amateurs – Yuki Harata and Martin Fuentes – who engaged in a brilliant fight in their Lamborghini Huracan and Ferrari 488 respectively. They finished just 0.16sec apart, and just under four seconds ahead of Parker Chase’s Audi R8.

The Porsche 911s of David Calvert-Jones and Tim Pappas were eighth and ninth with Rodrigo Baptista bringing the second Bentley home in 10th.

Paul Holton’s McLaren 570S captured the GT4 Invitational class by one second, with Harry Gottsacker’s SIN R1 in second place a similar distance ahead of Spencer Pumpelly in the Porsche Cayman.

The extended yellow was caused by Alec Udell who, while running fourth on Lap 7, made contact with the Cayman of Mike Sullivan, who struck the barriers hard. Udell’s 911 was given a 1-minute stop-and-hold penalty, resulting in 13th overall and last of the Pro-class finishers. He was in a better state than Daniel Morad, however, whose CRP Mercedes AMG GT3 retired with six laps to go.