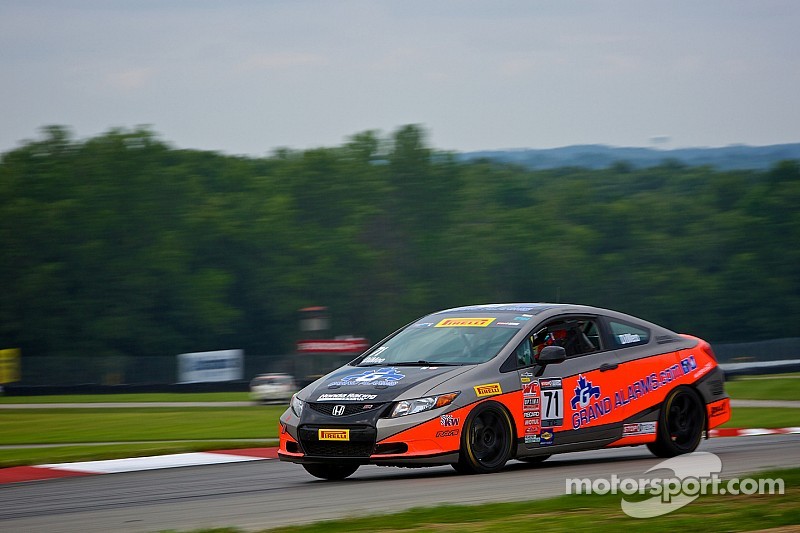 Ron Yarab impresses in first event with the team.

MANSFIELD, OH — From the drop of the green flag to the waving of the checkered the battle for the top spot in Touring Car at Mid-Ohio raged between Michael DiMeo and Adam Poland. Lap after lap, and sometimes corner to corner, the two young drivers swapped places for the lead, keeping the large Saturday crowd on their feet and enthralled. Both used lapped traffic to gain an advantage over their rival, with dramatic passes being taken by each, often with less than an inch or two between the cars as they went side-by-side through Madness and the Carousel.

In the end, it was Compass360 Racing’s 21-year-old rookie who took the win in his #71 Grand Alarms / Honda Performance Development / Racing4Research.org Civic Si. It followed up the win he’d taken the day before in the series’ double-header, marking his eighth win of the season and his tenth straight podium. With two race weekends and four races left to go, DiMeo has wrapped up the TC Driver’s Championship, with C360R taking the Team Title and Honda securing the Manufacturer’s Championship. Unsurprisingly, DiMeo will also be crowned Rookie of the Year at the season finale at Utah in September, having tied Peter Cunningham for the most races won in a single PWC season.

This is a great series and racing with all these guys was a lot of fun and this was one of my best race weekends ever.

“I just can’t thank my guys, the Compass360 crew, enough,” exclaimed DiMeo. “Every weekend, they give me a car that’s just perfect to drive. Today it was just flawless and it was so amazing to fight with Adam. We raced hard but clean and my hat’s off to him for such a great race.”

Team Principal Karl Thomson was equally happy. “I was confident when we signed Michael that he had what it took to win a Pirelli World Challenge championship. Today, with that drive, he proved the point beyond a doubt. He’s a great young man, a talented driver, and a deserving champion. The team and I are so tremendously proud of him.”

Local driver Ron Yarab joined C360R for the first time this weekend, and enjoyed his debut in a front-wheel-drive car at the helm of the #72 Children’s Tumor Foundation / HPD / Racing4Research.org Honda. Yarab is one of R4R’s founding drivers and is a physician who has worked with patients living with neurofibromatosis — or NF — the disorder that CTF funds research towards finding a cure for. “It was great to be here representing CTF in the Art Car this weekend. This is my home track, so I know my way around here pretty well, but as a regular driver of a Porsche GT3 Cup car, the transition to a front-wheel-drive car took some time.”

Yarab’s local track knowledge proved invaluable in Saturday’s race, which started in the wet, where he moved through the pack into a solid third position at the midway point. As the track dried, he fell back a few spots, finishing the race in a creditable sixth position. In Sunday’s race, he bogged down a little at the series’ signature standing start, but made up for the lost places with aplomb, slicing through the pack to once again finish sixth.

“I really enjoyed myself with the Honda this weekend,” remarked Ron. “This is a great series and racing with all these guys was a lot of fun and this was one of my best race weekends ever.    ”

CTF’s Racing4Research program once again welcomed a number of NF Heroes and their families to the race track, with a sizeable contingent cheering Yarab and DiMeo on throughout the Saturday race. Their weekend was capped off with an impromptu visit to victory lane where Michael dedicated his win to the kids.