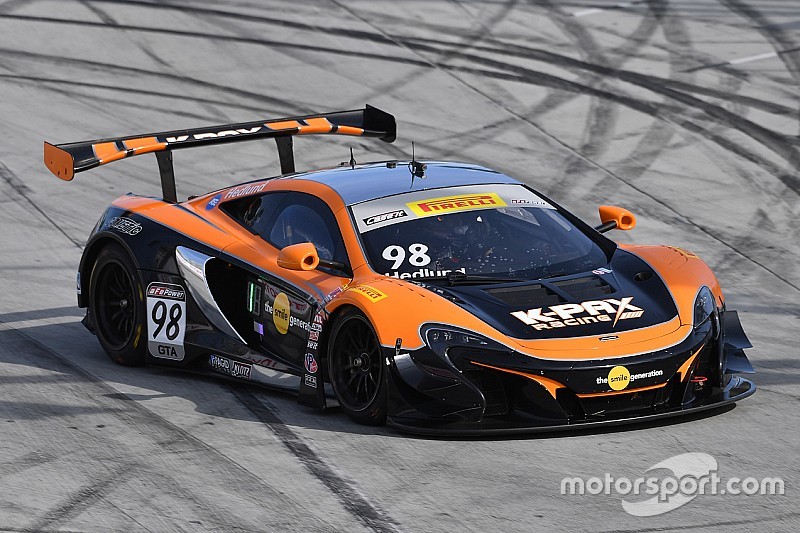 Sonoma, Calif. – From the safety of his computer chair, Mike Hedlund had an itch. This sensation was particularly a nagging one as it could only be scratched by extending his hand not to a keyboard, but to the top of a steering wheel. Hedlund, who co-founded Social Concepts, Inc. in 2006 – a computer programming company – found enough success in his business to strap into some of motorsports most lustrous cars.

“I pretty much gave up on all racing and just worked really hard at computers,” Hedlund said. “That’s what I decided to do as a profession. I was pretty confident [in my abilities] – that they were good enough to allow me to go racing now that I’m older.”

Hedlund is competing for a title in the Pirelli World Challenge GTA class under the K-PAX Racing banner. In three races, Hedlund has recorded one podium finish and currently ranks high in the points standings for 2017. He has seen exponential success after taking a 10-year hiatus from competing in a sport that has been in his heart right along.

His urge to race was reminiscent of when he competed on two-wheels. From the time Hedlund was seven years-old, he competed in motocross with hopes of reaching a professional level. Upon the realization that there was more security in computer programming, Hedlund refocused his time “connecting people on the Internet through social entertainment” – even helping to create a mobile gaming company. But to Hedlund, real success meant escaping the virtual world.

“It didn’t really matter what it was – cars or motorcycles,” Hedlund said. “I didn’t have the chance to race go-karts [like the others]. No one in my family was into that because we were all on the two-wheel side. I would have loved to when I was little, but it wasn’t until I got older when I started taking my street car out to the track that I really started to follow car racing. When I followed it, I saw there was a chance I could get into them myself to a certain extent.”

My goal is to definitely fight for the championship

Hedlund’s racing spirit resurfaced in the late-1990s since his motocross days. For about a decade, he participated in High Performance Driver Education track days local to hometown in Redwood City, Calif., as well as the Jim Russell Racing Drivers School in nearby Sonoma. Hedlund leisurely tested his skills with his Acura NSX and Toyota Supra against his friends for a time, until he had the opportunity to compete in his first “chump car kind of race” with his buddies in 2011. They buckled into an old, boxy BMW E30, which broke down before the finish-line. Call it “unfinished business” as to why Hedlund did not draw the line short of crossing the finish.

“I was like, ‘I have to do this,’” said Hedlund, who spent most of his time nurturing his computer business at the time. “All I did was live and breathe my work. That’s all I did to try to make it successful. But [that race] was so much fun, and I realized at that moment that I wanted to race. I was never super-competitive with it, but I wanted to continue to learn to drive properly. I had to stick with it if I wanted to become a better driver. So, I contacted one of my buddies in racing…”

Through his neighborhood connections, Hedlund sold his Corvette C6 Z06 to purchase Johannes Van Overbeek’s old WC-spec 996 Porsche GT3 car. Hedlund’s raw talent became refined in the car – participating in more test days – but he knew he needed better. Resembling computer software, Hedlund needed an upgrade to be able to perform at his best. He sought a newer Porsche 997 Cup car and upon acquiring one, he became more invested in sportscar racing. He laughed: “I kind of went ‘all-in.’”

“I was expecting it to be a bigger step than what it was,” Hedlund said. “But it was relatively easy and quick. I wanted to race Porsche Cup cars against others who were trying to move up the ladder to be a professional driver. I never had the ambition to be a ‘professional’ [at first]. I just wanted to race against people who were really good to hopefully make me as good. This is one of the few things I’ve done where it didn’t come easy, but it felt like it was something I had to do. I had to master it.”

On March 11, 2011, Hedlund’s first club race in his Porsche GT3 car was with Sports Car Club of America (SCCA) Club Racing at Buttonwillow, Calif., where he finished first in his class and third overall among the field. That year, he mainly competed in SCCA Club Racing, which doubles as a developmental program for drivers. He maximized his time behind the wheel by also competing in National Auto Sport Association Club Racing.

Notably, Hedlund says his first “professional” race was on January 26, 2012 at the Rolex 24 Hours of Daytona. He competed under the TRG banner – a local team – before expanding to other teams and series like the GRAND-AM Rolex Series. His racing career became serious within his first couple years, and he found himself scavenging for resources to stay competitive at such a high level.

Above Hedlund’s many accomplishments since then, he captured three podium finishes in the ALMS GTC class driving the gold Hertz Porsche in 2013. Four years later, Hedlund revisited the podium with the K-PAX Racing team in just his second race in a McLaren 650S GT3 racecar. Currently, he is in contention for a title in the Pirelli World Challenge GTA class.

“My goal is to definitely fight for the championship,” Hedlund said. “Anything less than that is just not good enough. That’s why I signed-up to drive this year and why I’ve put the effort into this. Who knows what will happen in racing, but that’s my goal. If I end the season quicker than when I started then that’s pretty good, but for this year I really want to go for those championships – that goes for both the GTA and SprintX class.”

From April 28-30, the series will reintroduce the SprintX class in 2017 at VIRginia International Raceway (VIR). Hedlund will be paired with 26-year-old Michael James Lewis, whom he met during the 2015 race season. In early-March, K-PAX Racing tested at VIR and throughout the session, the two could be found reading over notes and preparing for a track that has not been on the series schedule since 2010.

When Lewis first met Hedlund in 2015, he was astounded by his talent behind the wheel. Though the SprintX races are set for 60-minutes with a driver change in-between, Lewis said he believes it is still a team effort and expresses confidence having Hedlund as his partner. Emphasizing team camaraderie, the tandem takes a more analytical approach to racing in hopes of finishing at the top.

“I totally thought he was a pro driver [in 2015],” Lewis said. “For how well he was driving – from being really aggressive and sliding the car around – I was like, ‘Oh my gosh, this is a pro guy.’ He’s just a really fast guy who likes to have fun. To be teaming-up with someone who has a lot of experience, it should be fun.”