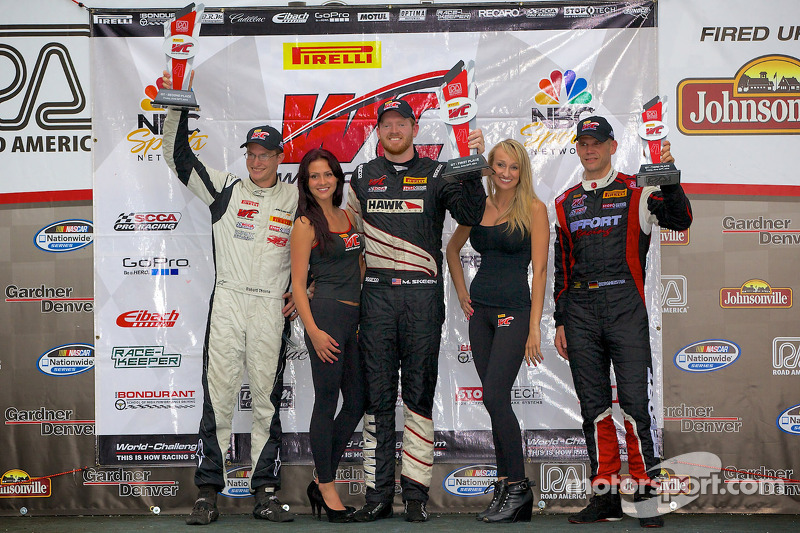 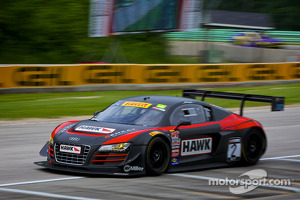 Saturday’s Round 8 was interrupted by a mid-race yellow flag that spanned from Laps 5 to 11, after both Alex Figge, of Denver, Col., in the No. 9 K-PAX Racing McLaren 12C GT3 and Anthony Lazzaro, of Atlanta, Ga., in the No. 61 R. Ferri Motorsports Ferrari 458 Italia GT3 suffered heavy contact exiting Turn 1 at the Turn 2 slight right-handed. The McLaren had substantial damage and the Ferrari less so; both drivers got out of their cars under their own power, and were checked and released after observation.

What that meant was that the race was basically two separate sprints of five and six laps on either side of the caution. Skeen started from pole in the No. 2 Hawk Performance Audi R8 Ultra but Johnny O’Connell, of Flowery Branch, Ga., in the No. 3 Cadillac Racing Cadillac CTS-V.R got ahead of him on the start. O’Connell then held the lead through the caution until Lap 11.

Skeen then made the winning move on the restart lap, Lap 12, with a pass to O’Connell’s inside at the 90-degree left-hander Turn 5. The win was Skeen’s second straight Cadillac CTS-V Move of the Race award-winner, after his pass on the other Cadillac of Andy Pilgrim during Friday’s Round 7 netted him his first win of the season. 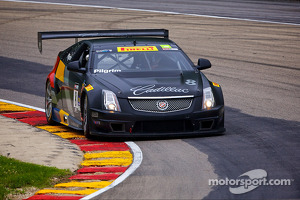 Momentum helped Pilgrim, of Boca Raton, Fla., in the No. 8 Cadillac Racing Cadillac CTS-V.R pass O’Connell for second on the same lap. But Pilgrim was unable to hunt down Skeen and finished 1.748 seconds behind at the end of the 16-lap race at the 4.048-mile road course.

“Today starting on the pole made it a lot easier,” Skeen said. “We had a good start but Johnny got around me into 5, and led early. We were worried we didn’t get the heat in the tires. But we made it back up. We’ve learned a lot on the test day, and we’re very happy with where we are with this car.”

Pilgrim was second, his fourth runner-up finish of the season, with O’Connell third. O’Connell held off Butch Leitzinger, in the No. 08 Bentley/Breitling/Mobil 1 Bentley Continental GT3 for Dyson Racing Team Bentley, for the final podium position.

“I was thinking points this weekend, but that was cool,” O’Connell said of his race. “Butch and I never really raced, because when I was GT, he was prototype or vice versa. It’s awesome that Dyson Racing and Bentley have chosen to be here, and bodes well for the future of what this series wants to become.”

Finishing fifth for his second top-five finish in as many races was Tim Bergmeister, of Langfeld, Germany, in the No. 31 EFFORT Racing Porsche GT3 R.

Of note, Tomas Enge, of Liberec, Czech Republic, finished ninth in the repaired No. 25 Reiter Engineering Lamborghini Gallardo FL2 after an accident on Friday. With a gain of five positions from the start, Enge took home the Optima Batteries Best Standing Start Award.

The GT-A battle saw Hahn, of Sao Paulo, Brazil, take his third win of the year in the No. 0 Reiter Engineering Lamborghini Gallardo FL2 in dramatic circumstances. After an accident Friday where he got caught up in another driver’s stall off the starting line, Hahn’s primary blue-and-silver Blau Pharmaceutical-backed entry was damaged too much beyond repair in time for Saturday’s Round 8.

The team brought its plain white backup chassis to the track and Hahn, who’d never driven the car prior to Saturday, made a late-race pass for the lead at the Kink on Henrik Hedman, of Ft. Lauderdale, Fla., in the No. 10 DragonSpeed Ferrari 458 Italia GT3.

“We couldn’t avoid the accident yesterday, so we decided to use the reserve car,” Hahn said. “This is an amazing result. We got lucky after the restart, made more aggressive driving and a good move for first place.”

The Swede was second with Jeff Courtney, of Milwaukee, Wis., third for the second consecutive race in the No. 99 Kenda/RecStuff.com Audi R8 Ultra. 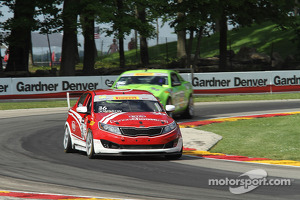 As it was on Friday, the GTS race was fairly straightforward with Jonsson, of Buford, Ga., able to control the race in the No. 36 DonorsChoose.org Kia Optima for Kia Racing/Kinetic Motorsports. He led all 16 laps en route to his third win of the season, with a winning margin of victory of 1.019 seconds.

“Working hard pays off, and my Kia Optima showed full performance this weekend,” said Jonsson. “It’s a nice bounce back after Detroit for the points.”

Second following a great move for the position on the second-to-last lap was Jack Roush Jr., of Livonia, Mich., in the No. 60 ROUSH Road Racing Ford Mustang Boss 302R. Roush won a three-way Mustang fight for second, in what was awarded the Invisible Glass Clean Pass of the Race award, and secured his second runner-up finish of the season.

“I just tried to make moves wherever I could,” Roush Jr. said. “The car was awesome today and it’s a testament to the team, who stayed til 1:30 working on the car. We had an incident yesterday and recovered.”

Third for his third podium finish of the season, following a last-lap pass exiting Turn 12 and into Turn 13, was Tony Buffomante, of Naperville, Ill., in the No. 33 Capaldi Racing/Ford Racing Ford Mustang Boss 302S. Buffomante made the move on another Ford driver, Dean Martin, of Westland, Mich., in the No. 50 Picture Cars East/Rehagen Racing Ford Mustang Boss 302S. Martin was still fourth after starting eighth, but just off the podium.

“We had a really bad start with something off electronically, and dropped back to sixth or seventh, then got up to Dean and I was faster,” Buffomante said. “He was driving well. I tried it a couple times, but that allowed Jack (Roush Jr.) to get around me. So I tried it on the outside, needed the rumbles, needed the dirt. Dean raced me clean; I hope this wasn’t it for the season.”

Rounding out the top five, and the fourth Mustang in a row, was Alec Udell, of The Woodlands, Texas in the No. 17 Watson Racing/MDG/Eurotech Industries Ford Mustang Boss 302S. Udell, who started 18th in class, was the Sunoco Hard Charger Award winner with a net gain of 17 positions from start-to-finish.

O’Connell (GT) and the Kia pair of Jonsson and Mark Wilkins, of Toronto, are locked in a tight battle for the GTS points lead. More information can be found on the series website, world-challenge.com.