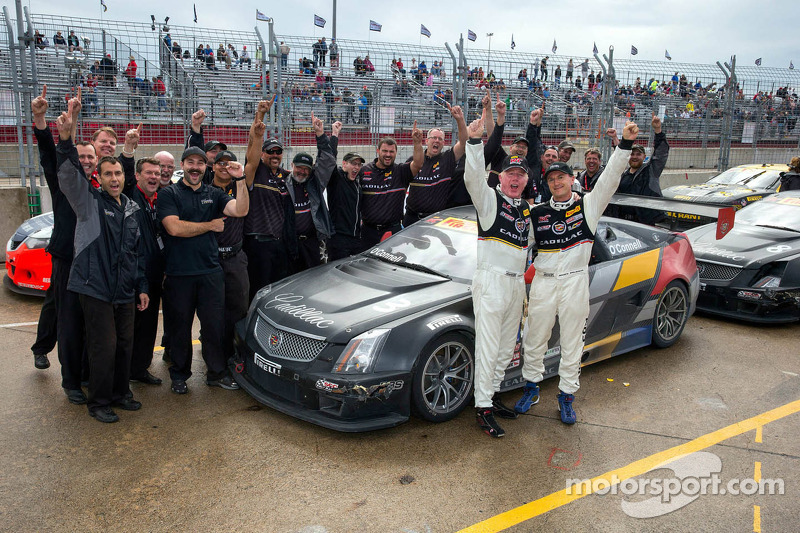 Houston, TX - Johnny O'Connell, of Flowery Branch, GA (GT) and Lawson Aschenbach, of Jupiter, FL (GTS) captured Pirelli World Challenge class championships after dramatic victories in the 14th and final round of the 2013 season. The FOAMETIX Grand Prix of Houston was part of the Shell and Pennzoil Grand Prix of Houston weekend.

Both O'Connell and Aschenbach entered the race second in points in their respective classes. But the points leaders each lost out in dramatic fashion at the end of the race, with James Sofronas (GT) losing out after a late race flat tire, and Jack Baldwin (GTS) dropping down the order after running second most of the race.

O'Connell's win was his fifth this season, and Aschenbach's was his sixth. Both drivers led their respective classes in wins this year. 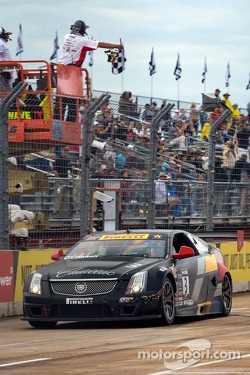 GT and GTS drivers had not had any on-track sessions on the 1.634-mile MD Anderson Center Speedway at Reliant Park since Friday's second practice. Complicating things further was the fact that Friday's sessions were run in the heat and with high humidity, while Sunday's Round 14 began in 59 degree temperatures in wet, rainy conditions.

Points leaders Sofronas, of Villa Park, CA in the No. 14 The Thermal Club/Swisher Racing/GMG Audi R8 and Baldwin, of Marietta, GA in the No. 73 Motul/StopTech/Foametix Porsche Cayman S started on pole as a result of qualifying being canceled because of track alterations and time constraints.

The race began with two laps under yellow and the start switched from a standing start to a single file, rolling start, due to the wet conditions. Sofronas got away cleanly in GT while in GTS, Aschenbach surged ahead of Baldwin after starting second.

There was an incident at Turn 3 as Alex Figge, of Denver, CO, in the No. 9 K-PAX Racing Volvo S60, dove down the inside of his teammate Randy Pobst, of Gainesville, GA and series debutante Rene Rast, of Minden, Germany, on the outside, heading into the 90-degree left-hander. Figge's car contacted Rast's No. 95 Swisher Racing/GMG Audi R8 LMS and they both hit the tire barriers, but were able to resume. Pobst emerged from the chaos unscathed in the No. 6 K-PAX Racing Volvo S60.

Sofronas then led the Cadillac teammates of O'Connell and Andy Pilgrim, of Boca Raton, FL in the No. 8 Cadillac Racing Cadillac CTS-V.R. At one point Sofronas surged ahead of O'Connell and Pilgrim. Asked if it was a strategic move to let Sofronas run out front, O'Connell responded with "there was absolutely no strategy in that at all.

You gotta give credit to James Sofronas and the Audi guys. It was all I could do to stay close. We have a couple things we could play with in terms of traction control. I fell back to fourth and had to come back. If the fans didn't enjoy watching this race, man, they're not gonna enjoy anything."

Behind them Pobst, whose Volvo with all-wheel drive excelled in the conditions, charged forward along with Rast, who wound up setting laps anywhere from two to three seconds faster than the leaders.

Pobst got past O'Connell for second on Lap 7 and immediately began closing down the gap to Sofronas in the lead as the GT field cycled through GTS traffic. By Lap 17, as the track conditions continued to improve, the top four in GT could basically be covered by a blanket – Sofronas led from Pobst, O'Connell and Rast. 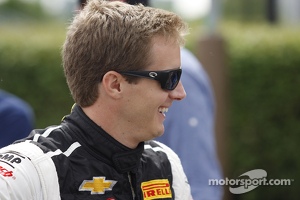 Sofronas' Audi, though, failed to keep up the pace as the track conditions improved. Pobst and O'Connell moved through for first and second by Lap 23, and that put Sofronas into the clutches of his teammate, Rast, and Pilgrim in the second Cadillac.

The GT championship turned on its axis on Lap 25. At the same time a call from Race Control was issued for the two Audis and Pilgrim's Cadillac to "clean it up," Sofronas incurred a left rear puncture and had to retreat to the pits for repairs. Pilgrim was later issued a drive-through penalty for avoidable contact, which he served.

By Lap 26 O'Connell had moved ahead of Pobst for the race lead, which confirmed his place at the head of the GT points standings. The move also secured O'Connell the Cadillac Move of the Race Award.

"It was constantly changing conditions for the K-PAX Volvo S60, which is all-wheel drive," said Pobst. "When it was really wet we were in good shape. The Cadillacs and Audi R8 of Sofronas ran really well for the conditions though. I was conservative because I knew I had a traction advantage. We have AWD and no one else does. I hung on as long as I could. The track started to dry a lot. GT/GTS cars dried this track up, and the drier it got, the slower I got."

With O'Connell in the lead Sofronas pitted, and a win would net O'Connell the championship regardless of Sofronas' finishing position.

"People at every level of Cadillac support us and give Andy and I amazing race cars," said O'Connell. "Coming down to the wire, I lost a lot of sleep over it. That's really the way a championship should be decided. When you have a great car it makes things a lot easier. I'm emotionally tired just because your guys, they're counting on you."

Aschenbach took the lead from Baldwin after the green flag on Lap 3. But Aschenbach needed Baldwin to finish either third or fourth or worse, depending on bonus points gained, in order to overtake the season-long GTS class points leader.

"The biggest thing I knew coming in, we had to win and lead most laps, and hope things fell our way and they did," said Aschenbach. "I got a good start and a jump on Jack to get the lead. Peter and Mark eventually caught up and I'm glad it ended how it ended. More importantly, big thanks and job well done to everyone at Blackdog Speed Shop and Chevrolet."

Baldwin held second most of the race but as the afternoon progressed, pressure began to mount in Baldwin's rear view mirror. Peter Cunningham, of Milwaukee, WI in the No. 42 Acura/HPD/RealTime Racing Acura TSX and Mark Wilkins, of Toronto, in the No. 38 B.R.A.K.E.S. Kia Optima turbo were running laps at a fast enough clip to catch, and eventually pass, Baldwin.

Cunningham advanced to second and Wilkins, who was running two to three seconds per lap faster than Aschenbach in the waning stages of the race, simply ran out of time. With a fourth place finish Baldwin lost the title by just 12 points.

Andy Lee, of Colorado Springs, CO in the No. 20 Best IT/Crown Seven/Bondurant Chevrolet Camaro, rounded out his season with fifth in GTS. One of Cunningham's earlier moves, past Lee, was awarded the Invisible Glass Clean Pass of the Race Award.

Of note, local driver Don Istook, of River Oaks, TX, took home the Optima Batteries Best Start Award with a gain of seven positions at the end of the first green lap in the No. 01 Milltek Exhaust/STaSIS/REVO Audi TT RS. Istook finished 14th in the GTS class. Also of note, Brian Kleeman, of Towson, MD was the Sunoco Hard Charger Award winner after advancing seven spots from his grid position by the checkered flag in the No. 07 DXD Clutches/DWW Motorsports Nissan 370Z.

Porsche back in Pirelli World Challenge