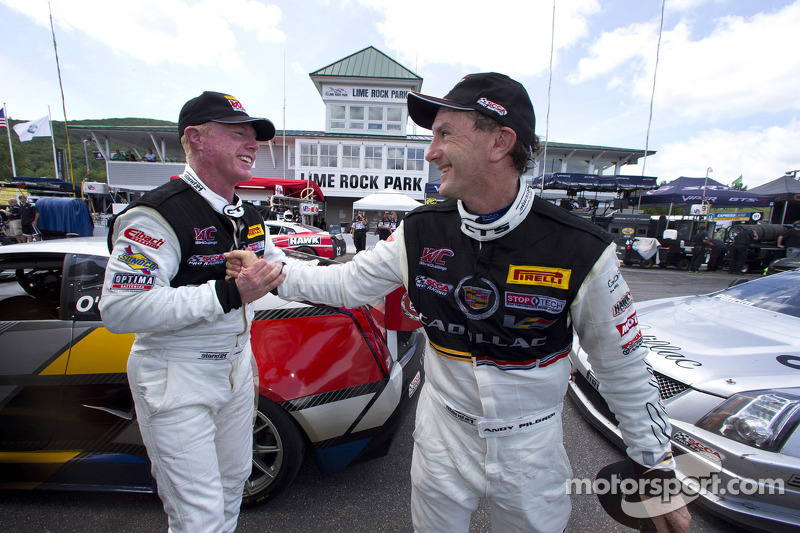 O'Connell and Pilgrim netted Cadillac Racing its first 1-2 finish of the season. Baldwin earned his third victory this year in his Porsche Cayman.

Lakeville, CT - Johnny O'Connell, of Flowery Branch, GA, and Jack Baldwin of Marrietta, GA took home wins in GT and GTS respectively at the Cadillac Lime Rock Park Grand Prix on Saturday for Round 9 of the Pirelli World Challenge 2013 season.

O'Connell started from the Motul pole and led the 49-lap race flag-to-flag at an average speed of 93.710 mph. On Friday in Round 8, O'Connell fell to third place at the flag.

"Yesterday I went to sleep and I thought, 'You know, I drove a strong race yesterday,'" said O'Connell. "It was just the luck of traffic there. I'm very, very pleased with how things went today. It's a shame Mike (Skeen) had issues with the Corvette, as we would have like to resumed that battle. We made some changes to the Cadillac CTS-V.R after Friday and expected it to have the type of run we did."

O'Connell's teammate Andy Pilgrim, of Boca Raton, FL, driving the No. 8 Cadillac Racing CTS-V.R finished second for the second straight day in a row, while Randy Pobst, of Gainesville, GA, in the K-PAX Racing Volvo S60 finished third. Pilgrim's pass on Pobst for second place on Lap 9 netted him the Cadillac CTS-V Move of the Race Award.

Pilgrim praised the entire GT and GTS field for their cleanliness in Round 9. As in Round 8, only one full course caution slowed the 50-minute race on the 1.53-mile, seven-turn "bullring."

"Running this race as green as we did was a testament to the skill level of the lot of the guys here," said Pilgrim. "Guys are getting good at using their mirrors. It was really fun racing; congrats to Johnny and Cadillac Racing and it was fun running with Randy."

Behind the top three, James Sofronas, of Villa Park, CA in the No. 14 GMG/Swisher Racing/Mobil 1 Audi R8 LMS and Oliver Bryant, of England, in the No. 33 Fusion WorldWide Mercedes Benz AMG SLS GT-3 completed the top five.

Round 8 winner Mike Skeen, of Charlotte, NC in the No. 2 Hawk Performance Chevrolet Corvette, retired after just one lap with a mechanical issue.

In GTS, Lawson Aschenbach, of Jupiter, FL started from the Motul pole and held the lead over Drivers' Points leader Baldwin, who started second, for a majority of the race. At numerous points Baldwin challenged Aschenbach for lead but could not complete the pass. Then in lapped traffic on Lap 26, Aschenbach's charge was affected by traffic. As he moved up the road through Turn 1, Baldwin moved to his inside to make the pass. The pass scored Baldwin the Invisible Glass Clean Pass of the Race Award.

"We made a chassis change and hit the setup today," said Baldwin. "I was following Lawson, and he was doing a great job. I knew I needed a break in traffic and I got it when a Mercedes got into Lawson, pushed him up high in one, and I got by on the inside. That was the event that changed the outcome of the race."

Baldwin's win is his third this season, and his eighth podium finish in nine races. He swept the opening doubleheader weekend at St. Petersburg but had not won since.

"I'm very fortunate and appreciate it," said Baldwin. "It's about time to win another one, so thanks. We had a winning car yesterday. I felt bruised and bloodied yesterday getting hit about six times. I just couldn't make it happen. But big thanks to the GTSport with Goldcrest team."

Aschenbach was looking to complete the weekend sweep in the No. 10 Blackdog Speed Shop Chevrolet Camaro. It is still his sixth podium finish in nine races this season.

"I knew coming in it was going to be that way (with traffic)," said Aschenbach. "Today I got the bad side of it. It's frustrating. You expect GT cars to go by you and be done with it. It gave Jack a wide-open inside of Turn 1. Hats off to Blackdog Speed Shop Team Chevy Camaro. If I just did my lines and did what I had to do, I thought I could keep him behind. We'll regroup and be better at Toronto."

Mark Wilkins, of Toronto, Ontario, finished third in the No. 38 KIA Motors America KIA Optima, for his third podium finish in the last four races. He started sixth and advanced to third, and consolidated second place in the unofficial points behind Baldwin.

"Good points day for us all things considered, and a great effort from the Kinetic Motorsports and KIA guys," said Wilkins. "This is a tough track for our car because all the right-hand turns load the left front really hard. With the weight up front, we have to manage it."

Andy Lee, of Colorado Springs, CO, in the No. 20 Best IT/Bondurant/Crown Seven Chevrolet Camaro, finished fourth ahead of Wilkins' teammate, Nic Jonsson of Sweden, in the No. 36 KIA Motors America KIA Optima. Jonsson's fifth place finish is his third top-five finish of the season.

In GTS, Baldwin leads Wilkins by 123 points, 986-863. Aschenbach is third with 766 points with Lee fourth on 727 and Peter Cunningham, of Milwaukee, WI, fifth with 701 in the No. 42 Acura/HPD/RealTime Racing Acura TSX. Cunningham finished Round 9 in 13th place.

The Pirelli World Challenge GT and GTS classes' next race is north of the border on the streets of Toronto at Exhibition Place, July 12-14.

Team Cadillac second and third in race one at Lime Rock