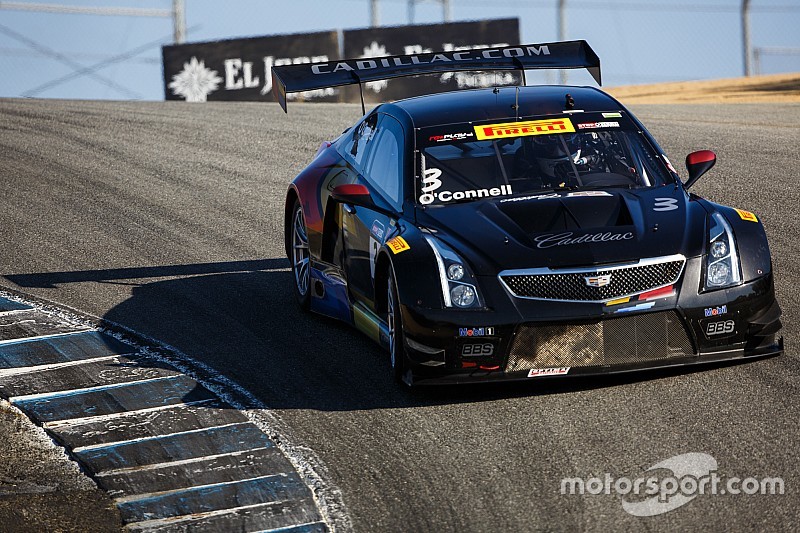 But the race was dominated by Ferraris.

Alessandro Balzan, in the MOMO/NGT Ferrari 458 GT3 Italia, took the overall and GT win at the Pirelli World Challenge season finale at Mazda Raceway Laguna Seca today, just ahead of his Ferrari teammate Alessandro PierGuidi, who qualified on the pole for the Mazda Raceway Grand Prix Presented by Cadillac.

Third was Ryan Dalziel in the EFFORT Racing Porsche 911 GT3R, followed by a resurgent Andy Pilgrim in the Cadillac ATS-VR GT3, a solid end to a bad season for the veteran racer. Fifth was rookie Michael Lewis in a team Porsche to Dalziel.

Johnny O’Connell survived some early-race contact to finish a disappointing 12th, but it was enough to get the Cadillac driver, teammate to Pilgrim, his fourth championship, and the first for the new ATS-VR GT3 in its debut season. Olivier Beretta, O’Connell’s rival for the title, finished 35th.

In the Porsche-only GT Cup, Colin Thompson won the class with a 28th overall finish in the 37-car field. He also won the championship.

Earlier in the day, Ernie Francis, Jr., won the TC class in his Mazda MX-5, with Corey Fergus in second, enough to win the season championship for the Porsche Cayman driver.

In TCA, Jason Wolfe, in a Kia Forte Koup, took the win and the season championship. And in TCB, Joey Jordan, in his potent Mazda 2, won his third straight. The TCB season championship goes to Johan Schwartz, driver of a Chevrolet Sonic.

In GTS, Michael Cooper claimed the championship in his Chevrolet Camaro Z28 with a 10th-place finish, but Kris Wilson won the final race in an Aston-Martin Vantage GT4, followed by Jack Baldwin in a Porsche Cayman. Twenty-seven cars were in the field.