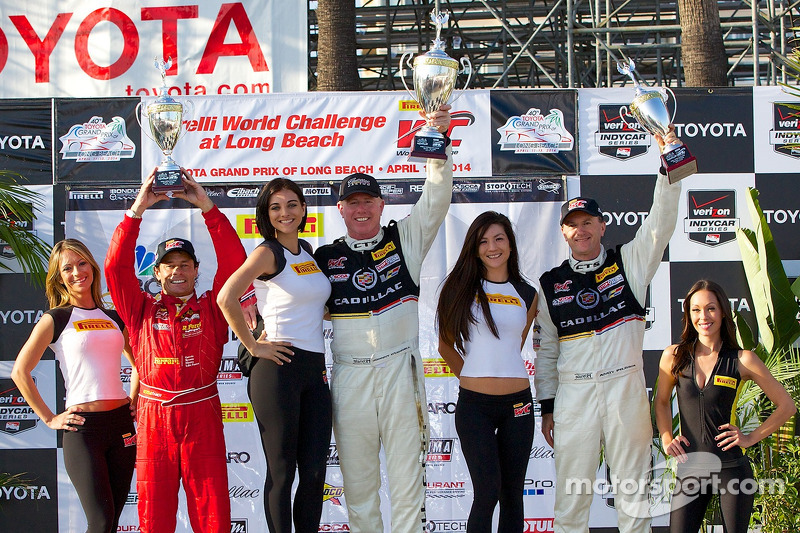 LONG BEACH, Calif. - Johnny O'Connell (GT), Nic Jonsson (GTS) and Michael Mills (GT-A) took victories in Round 2 of the Pirelli World Challenge season, The Roar By the Shore Presented by Kia, on the streets of Long Beach.

For O'Connell, of Flowery Branch, Ga. in the No. 3 Cadillac Racing Cadillac CTS-V.R, it was a controlled drive from pole position ahead of his teammate Andy Pilgrim, with a margin of victory of 1.528 seconds at 75.313 mph.

O'Connell led all 32 laps to secure his first win of the season and 11th of his Pirelli World Challenge career. It capped a perfect weekend where he took home 151 points, led Friday's single practice session and took the pole on Saturday.

"You want to hit up the tracks you know that will favor us," O'Connell said. "If you make no mistakes, good things happen. We didn't make any mistakes all weekend. "

After finishing 10th at St. Petersburg, and losing out late in this race last year, this was a needed result for the two-time defending GT class champion.

"Honestly it's going to be a long season climbing back from what happened at St. Pete," he said. "We came away with barely any points there. We have to score points, and we got maximum points. Getting so close last year I was super motivated to get the win today."

Pilgrim, of Boca Raton, Fla., made it home in second in the No. 8 Cadillac Racing Cadillac CTS-V.R. The result is Cadillac's first 1-2 finish of the season, and was last achieved at Round 10 of the 2013 season in Toronto, also led by O'Connell.

"You hope it might be the other way around and sometimes it is," Pilgrim said. "But it's all good, because we're teammates. We felt we had an advantage here, but the next track we won't. The downforce of the FIA cars will come into play. And we have three years' experience on these cars, with the setups. They'll learn more as the season goes on. We've got 14 more races to go. It's just the beginning for now."

In third and posting a solid effort where he closed but was unable to overtake the Cadillacs was Anthony Lazzaro, of Atlanta, Ga., in the No. 61 R. Ferri Motorsports Ferrari 458 Italia GT3. Lazzaro, who finished fourth at St. Petersburg, secured R. Ferri's first overall podium in only the team's second Pirelli World Challenge race.

"We've made a lot of progress. R. Ferri Motorsports is going to be here to stay," he said. "Every lap we're making improvements. It's one of the best race cars I've had. We didn't have anything for the Cadillacs but we made it look better than it was. We should be better at Barber."

In fourth and leading a trio of Audi R8 Ultras was Andrew Palmer, of Chicago, in the No. 21 GMG Racing Audi R8 Ultra. James Sofronas, of Villa Park, Calif., secured his first top five of the new year in the No. 14 Spyder/The Thermal Club Audi R8 Ultra. Mike Skeen, of Charlotte, finished sixth in the No. 2 Hawk Performance Audi R8 Ultra, in CRP Racing's first race with its new chassis.

"It's good to be on top of the box, and in a Porsche," Mills said. "It's a bit unfortunate for Nick that he had some sort of contact, but we're glad to take the win. Most guys were really courteous today, and we're all starting to know each other and the respect is coming."

Henrik Hedman, of Ft. Lauderdale, Fla., finished second in GT-A in the No. 10 DragonSpeed Ferrari 458 Italia GT3, with Jeff Courtney, of Milwaukee, Wis., third in GT-A in the No. 99 Kenda/RecStuff.com Audi R8 Ultra. Hedman and Courtney finished 11th and 12th overall, and their podium finishes ensured the GT-A category has had six different drivers in the top three in just two races.

GTS also has that statistic of six podium finishers from two races with Kia Racing/Kinetic Motorsports' pair of Jonsson and Mark Wilkins ending first and third in the race nearby to Kia's North America headquarters in Irvine, Calif.

Jonsson took the lead on Lap 2 from second on the grid, and the driver from Buford, Ga. led the rest of the way in the No. 36 Kia Motors America Kia Optima. That pass of polesitter Jack Roush Jr. netted Jonsson the Cadillac CTS-V Move of the Race. Jonsson controlled the race after the race's only restart. The lone caution flag flew on the first lap when there was contact between Jack Baldwin, of Marietta, Ga., in the No. 73 RESET-MD/StopTech/Motul Porsche Cayman S, and David Sterckx, of Brussels, Belgium, in the No. 52 Always Evolving Racing Ford Mustang Boss 302S. Both drivers climbed out of their cars under their own power.

"It was a bit bunched up off the start and I took an outside line," Jonsson said. "The 15 minutes of yellow slowed the flow but we got going again. We started racing and I was fortunate to maintain it through the rest of the race. It's been a long run of tough luck; we had pace all the time, I just couldn't finish it."

The win, at a margin of victory of 5.183 seconds, is his second in Pirelli World Challenge, and first in nearly 10 years. He won the second Sonoma race in the Touring Car class in 2004. This result was a nice finish after a 2013 season where he was consistently bit by bad luck.

"That start was pretty hairy!" said Buffomante, who started fourth in class. "I thought going in, 'There isn't much room here for the standing start.' But Nic and I went wheel to wheel, and we really enjoyed a super clean race. I couldn't quite track him down and I held off Roush in another Boss 302 behind me. It's a dream start for us and the Ford family."

Meanwhile polesitter Roush Jr., of Livonia, Mich., fell back off the start in the No. 60 ROUSH Road Racing Ford Mustang Boss 302R and eventually was passed on the last lap by Jonsson's teammate, Mark Wilkins, of Toronto, in the No. 38 Kia Motors America Kia Optima.

"Jack ran a really strong race, but I think his tires were getting a little tired," Wilkins said. "He might have missed a shift and I dove on the brakes and went for it. But we made it stick for Kia at our home race."

Roush Jr. ended fourth with another Ford, driven by Alec Udell, of The Woodlands, Texas, fifth in the No. 17 Watson Racing Ford Mustang Boss 302S.

Andy Lee, of Colorado Springs, Col., finished seventh in GTS in the No. 20 Crown7.com/BestIT Racing Chevrolet Camaro and rebounded after losing several positions on the first lap. His pass of Tony Gaples, of Libertyville, Ill. in the No. 11 Blackdog Speed Shop, for ninth place on Lap 12 won him the Invisible Glass Clean Pass of the Race award.

Nick Esayian, of San Diego, Calif., secured the Sunoco Hard Charger award with a gain of 12 spots from start to finish in the No. 34 Natural Cures Aston Martin GT4 for TRG-AMR. Esayian ended 10th in GTS.

In the GT championship points standings, Pilgrim is up 224-188 on teammate O'Connell after two races. Lazzaro, with 181, is third and Palmer, on 180, is fourth. Mancuso in 11th overall, is highest classified GT-A driver on 121 points with Mills 12th and 114.

The next weekend of Pirelli World Challenge competition will be its first trip to Barber Motorsports Park April 25-27, where the GT, GT-A, GTS, TC, TCA and TCB categories will all be in action.