O'Connell, Martin double up in Detroit 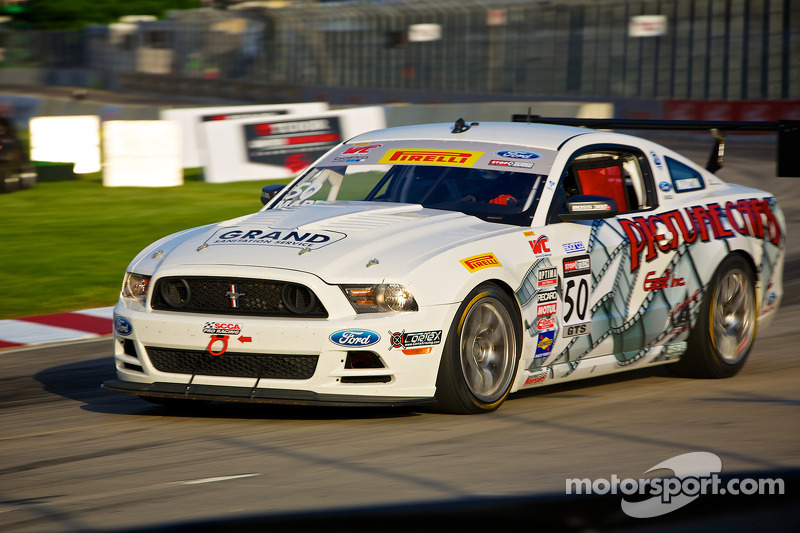 Johnny O'Connell, of Flowery Branch, Ga. (GT) and Dean Martin (in photo), of Westland, Mich. (GTS) repeated their Round 5 victories in Round 6 of the 2014 Pirelli World Challenge season, at the Cadillac V-Series Challenge presented by the Metro Detroit Cadillac Dealers. Additionally, Marcelo Hahn, of Sao Paulo, Brazil, became the first driver to score a second win within the GT-A classification this season.

Both O'Connell and Martin not only repeated their wins, but completed the same feats as they achieved on Saturday – flag-to-flag victories from Motul pole positions, which they earned by virtue of setting the fastest race laps in Round 5. O'Connell's win is his third this season and fifth in six starts over three years at Belle Isle Park; Martin's is his second of the season and third in four starts the last two years at Belle Isle.

The gap between them closed as the leaders worked through GTS class traffic in the waning stages of the race. Pilgrim got to O'Connell's rear bumper but never made a passing attempt. As the race reached the final 10 minutes, two separate instances of contact put the race under yellow. O'Connell's margin of victory under yellow was 0.148 of a second following the conclusion of the 25-lap race. "There are certain tracks that you know that you have to do well at. When we are on the street circuits we have an opportunity," O'Connell said. "The hardest thing for any driver is winning the first time at any track and once you win you wake up the next morning knowing that you can do it again."

In third in GT was Andrew Palmer, of Chicago, in the No. 21 GMG Racing Audi R8 Ultra for his second straight podium finish after finishing second on Saturday. It's Palmer's fourth podium finish of his first season in Pirelli World Challenge. Rounding out the top five was Mike Skeen, of Charlotte, N.C., in the No. 2 Hawk Performance Audi R8 Ultra, and Anthony Lazzaro, of Atlanta, Ga., in the No. 61 R. Ferri Motorsports Ferrari 458 Italia GT.

Skeen matched his fourth place result from Saturday while Lazzaro charged from eighth on the grid up to fifth by the finish. Lazzaro made several passes, with a move on Robert Thorne, of Littleton, Col., in the No. 6 K-PAX Racing McLaren 12C GT3 for seventh on Lap 12 earning him the Cadillac CTS-V Move of the Race.

Hahn, driving the No. 0 Reiter Engineering Lamborghini Gallardo FL2, completed an excellent bounce back race in GT-A after contact at Turn 6 ended his race on Saturday. Second was GT-A points leader Michael Mills, of Angleton, Texas, in the No. 41 EFFORT Racing Porsche GT3 R and third, for his second straight podium finish, was Dan Knox, of Pilot Point, Texas, in the No. 80 ACS Manufacturing, Inc./Performance SpeedTech SRT Viper GT3-R. "I was in first place yesterday and made a mistake and my team spent all night repairing the car for today," Hahn said. "In the beginning I was in second place and it was hard to pass Mills, but I got a chance and used it."

Eight cars in the GTS race were in podium contention, two had a more realistic shot at the win as a GT-A car was wedged in-between second and third place for the first 13 laps of the race.

Lap 20 proved the decisive moment of the race in the battle for the remaining podium positions behind Martin. Contact between James Sofronas, of Villa Park, Calif., in the No. 14 Spyder/The Thermal Club Audi R8 Ultra and Udell entering Turn 12 took Udell out of contention; the 18-year-old sought his first podium since finishing third in Sunday's second race here last year. Seventh place did not reflect how well he raced.

Additionally, contact between Baldwin and Roush at Turn 8 knocked Roush out of the race and put the field under yellow for the second time, and ultimately ended the race behind the safety car.

Martin was able to hang on and complete his first career series weekend sweep, with a winning margin of victory under yellow of 2.124 seconds. "We are committed to doing a full season in the series with our Mustang; the Mustangs really show their strength here in Detroit, our home territory," Martin said. "It's really great to bring home a win for Ford here. Hats off to our crew, brand new car that was originally built as a show car and we tore it down and took what was left from the race car from Barber."

Bushey had a banner day en route to this result. His SFR Enterprises, Inc. team worked more than 36-plus hours in the days prior to the weekend to even make the trip to Detroit. From 17th on the GTS grid, Bushey gained seven positions off the standing start to secure the Optima Batteries Best Standing Start Award. The ultimate gain of 13 positions from his starting spot also meant he earned the Sunoco Hard Charger Award.

Of note, Roush, who was classified 19th, earned the Invisible Glass Clean Pass of the Race Award for his move on Lawson Aschenbach, of Palm Beach Gardens, Fla., on Lap 9. Aschenbach, driving the No. 1 Blackdog Speed Shop Chevrolet Camaro, endured a difficult weekend with a 19th place result Saturday and a 20th on Sunday.

Points are provisional until posted as final, with O'Connell now in the lead of GT leaving the weekend with 702 points. Lazzaro on 614 and Palmer on 579 round out the top three. In GTS, the margin is 15 between Wilkins on 571 and Baldwin on 556. Martin, on the strength of his two wins, has vaulted from 17th entering the weekend to third leaving it, now on 466 points. In GT-A, Mills with 325 points leads Tim Pappas and Henrik Hedman, who both have 307 points.

The next round for the GT, GT-A and GTS contingent is at Elkhart Lake's Road America from June 19-21, as Pirelli World Challenge returns to the picturesque Wisconsin road course for the first time since 2009. With the TC, TCA and TCB classes also in action there, it will be the second of four all-class weekends this season.