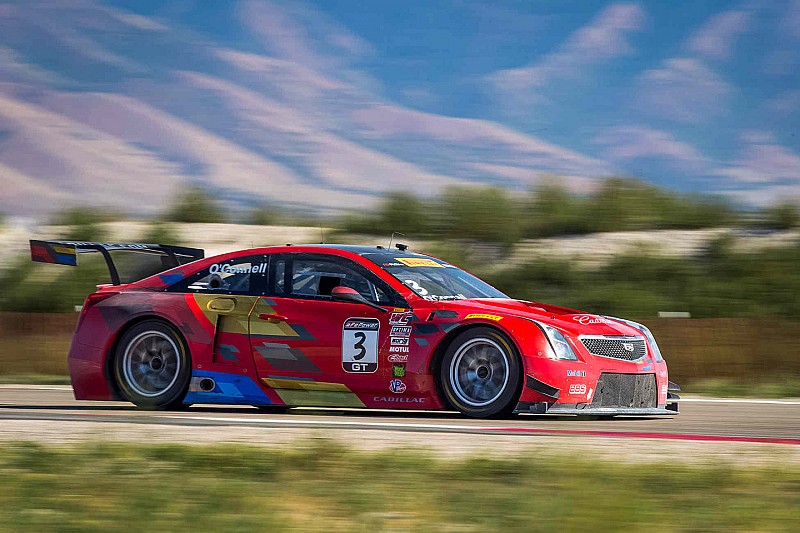 Four-time Pirelli World Challenge champion Johnny O’Connell made a brave last-lap pass on the polesitting and race-long leading McLaren of Austin Cindric to earn a remarkable victory for Cadillac at Sonoma Raceway.

There was drama from the start of World Challenge's first GT race of the weekend as 13th-place qualifier Jonathan Summerton spun his Mercedes-Benz SLS exiting Turn 1, but miraculously the 16 cars who started behind him all avoided the stationary Benz beast and he was able to continue.

That distracted everyone from the fact that, up front, polesitter Austin Cindric had made a perfect start to send his KPAX McLaren 650S straight into the lead with Johnny O’Connell grabbing second ahead of Cadillac teammate Michael Cooper to demote Cindric’s front-row teammate Alvaro Parente to fourth. Jon Fogarty remained in fifth with Michael Lewis’ Porsche chased by Bryan Heitkotter (Nissan GT-R), Adderly Fong’s Bentley, Patrick Long’s Porsche 911, Ryan Eversley in the Acura TLX, Colin Thompson in the third K-PAX McLaren and JD Davison in the second of the Nissans.

However, Thompson pitted on Lap 3 with a left-rear puncture.

By Lap 6, Cindric saw his hard-earned lead of 1.3sec whittled down to half that by O’Connell, with Cooper a further 1.5sec adrift yet able to remain a second clear of the McLarens of Parente and Fogarty. After some alarming sideways moments from O’Connell, the 54-year-old veteran dropped back a little from Cindric but continued to pull away from Cooper in third who, after a dozen laps, was 3.5sec behind his teammate but comfortably out of reach of his pursuers. Was he preserving his tires for a late charge?

Cindric’s lead gap stretched as much as 2sec but lapped cars enabled O’Connell back into firing range on Lap 20, although the Cadillac driver was notably having to open out the steering exiting the Turn 7 hairpin and ride the curbs to preserve his front tires. Cooper was holding station, three seconds back and by Lap 23 had a 6sec gap ahead of Parente.

Parente’s disappointing pace should have given Fogarty a chance to shove his own McLaren into fifth, but instead he was 2.5sec back, desperately trying to defend his fifth from the feisty Lewis in his Porsche, who had no distractions from behind, having pulled 5.5sec clear of Heitkotter’s Nissan.

Cooper started a charge on Lap 24, and three laps later had his deficit to O’Connell under 2sec. That seemed to reinvigorate O’Connell’s challenge to leader Cindric, but couldn’t get him away from Cooper who by Lap 29 was making it a true three-car battle for the lead, crossing the line half a second apart. That same lap, Lewis finally got ahead of Fogarty to put a Porsche in the top five.

The 31st lap, decreed as the final tour in this 50min lap, saw the trio having to pass traffic, but it was O’Connell’s pace through the Carousel that enabled him to challenge Cindric down to the hairpin at Turn 7, muscling past to grab the lead. O’Connell also looked for a way by three times in the remaining five corners, but kept it clean and settled for third behind the downcast teenager who had led all but the most important lap.

In the context of his teammate, Parente was a very subdued fourth, over 10sec adrift of the leading trio, only holding off Lewis by 0.4sec at the checkered flag. Fogarty remained ahead of Heitkotter to take sixth, with Long, Fong and Eversley completing the Top 10.

In GTA, Michael Schein got his Wright Motorsports Porsche ahead of Martin Fuentes’ Scuderia Corsa Ferrari at the start and pulled out a 3.5sec gap in the first 10 laps. The lead remained over 3sec at the checkered flag, with Cooper MacNeil taking third in the Alex Job Racing Porsche.

In GT Cup, class polesitter Alec Udell held off Sloan Urry by less than a second to take victory, with Mike Hedlund finishing 21sec adrift but 13sec ahead of Sloan Urry.