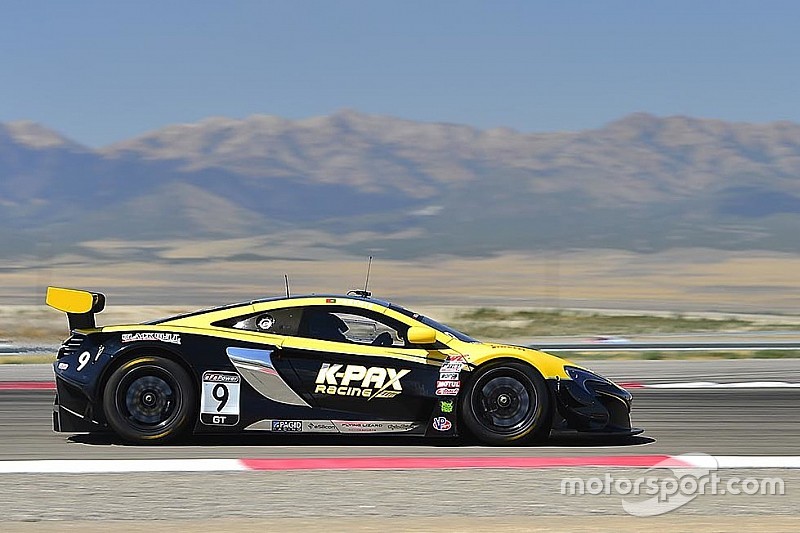 The drama began even before the start of the race, as the SCCA and PWC made a complete review of all class points Saturday evening, and declared that K-PAX McLaren’s Alvaro Parente had been incorrectly awarded the pole position points at Lime Rock having only earned P1 by default. (Pole-winner Andrew Palmer had crashed in warm-up and was unable to start).

With those seven points deleted, Parente entered Sunday’s GT season finale with only a two-point lead over Patrick Long (1547-1545).

The polesitting Cadillac ATS-V.R of Johnny O’Connell took the lead from the start, although it was disputed heavily by Patrick Long’s Wright Motorsports Porsche 911 through the first four corners. But the big news was right in their mirrors, as Parente burst through from the third row to grab P3.

Behind him, the second Cadillac of Michael Cooper was followed by Colin Thompson in another K-PAX McLaren, Bryan Heitkotter’s Nissan GT-R, as Jon Fogarty’s Gainsco Stallings McLaren and the third K-PAX McLaren of Austin Cindric were squeezed down to seventh and eighth. Ninth ran JD Davison in the second Nissan, with Gunnar Jeanette 10th in another Porsche.

However the race was put under full-course caution following a major shunt for the GTA-class Ferrari 458 of Martin Fuentes exiting Turn 3, while Mike Skeen’s Dodge Viper was also spun around and stalled at the Corkscrew.

When the field took the green again on Lap 6 with 37mins of the 50-minute race still to run, we were thus in the intriguing position of the two prime title contenders, Long and Parente, sandwiched by the two mathematical outsiders for the crown, O’Connell and Cooper. Despite much ducking and diving, the order remained intact.

On Lap 7, Long had to go majorly defensive through Turns 4 and 5 to stave off Parente, while Cooper looked to take advantage of the pair losing momentum… His teammate of course, was able to take advantage, stretching his lead to over one second.

This was eradicated on Lap 10, when the Bentley of Fabian Hamprecht – filling in for Adderely Fong – spun, crunched and stalled his Continental on the exit of Turn 3. That moved Spencer Pumpelly’s and Ryan Eversley’s Acura TLX-GTs, in the model’s final race, into 11th and 12th in class. They were, however, split by the lead GTA car, Michael Schein’s Porsche 911.

There was another significant moment under yellow; with Long and Parente having reached half-distance, with the guaranteed points, the Cadillac drivers were now eliminated from the championship hunt.

The race restarted on Lap 14 with 23min30sec left on the clock, O’Connell sprinting away down the straight as Long focused on keeping out of Parente’s lunging range. The plan worked well until the Corkscrew where Parente weaved his McLaren down the hill faster than Long could manage in the Porsche, and thus remained right in his mirrors.

And so it continued each lap: O’Connell ran around a second ahead of Long, with Parente a similar distance behind the Porsche and 1.5sec ahead of Cooper’s Caddy.

As the race went into its final 15mins, Thompson was 2sec behind Cooper, but then suddenly dropped his McLaren off the track, promoting Heitkotter, Fogarty and Cindric into P5-6-7 respectively.

A far more major incident brought out the third full-course yellow, as Drew Regitz sent his Audi R8 straight through the Turn 2 sandtrap and into the tires. That brought the race and the championship down to a one-lap sprint for the checker.

The lapped GT Cup-class Porsche 911 of Chris Thompson, that had been running between Long and Parente under caution, got out of the way by diving into the pits allowing Parente a clear run at Long on the restart. And the Portuguese driver pushed hard down the main straight but was simply outgunned. In fact, he struggled to find traction on the exit of Turn 2, and was struggling to hold off Cooper’s Cadillac.

Then, up front, the lead Cadillac of O’Connell ran slightly wide through Turn 4, losing momentum and almost forcing Long to take the outside into Turn 5 as they went in side by side. Had Long then just feathered the throttle and tucked in behind the Cadillac, he’d have been champion. Instead, the Porsche came across as if to claim the apex, when he was barely a fender ahead. O’Connell, with nothing to lose, was having none of that, stood his ground, braked deep, and the 911 bounced off the right-front corner of the Cadillac, sending Long wide and into the sandtrap.

A scarcely believing Parente thus swept through into second place, while Long rejoined the track in fifth behind Cooper and Heitkotter, his championship gone.

Fogarty finished sixth, but in his mirrors may have seen two fellow McLaren drivers – the other two K-PAX cars of Cindric and Thompson – come together in a dust cloud up at Turn 6, with terminal consequences. That allowed Davison and Jeannette into seventh and eighth, with the Acura pair of Pumpelly and Eversley competing the Top 10.