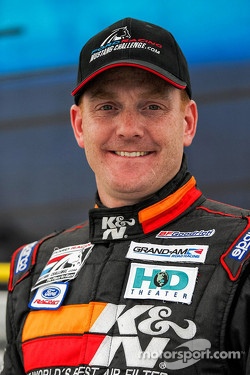 Brown’s team, Paul Brown/Tiger Racing, also won the team championship in the same series last year and secured the manufacturer’s championship for Ford. That nameplate has always been very important to Brown, whose father is Mustang legend Kenny Brown of Kenny Brown Performance.

Paul Brown was unexpectedly diagnosed with skin cancer in March, just two weeks before the 2012 World Challenge season opener. Justin Bell drove his eBay Motors/Kenny Brown Performance Ford Mustang Boss 302S in most of the races this season. Brown had full knowledge of his prognosis but he was determined to try to drive in the doubleheader at Canadian Tire Motorsports Park in Bowmanville, Ontario in June despite his illness so he could experience the thrills of competition and the camaraderie of his team and fellow competitors one more time.

Showing his intense love of the sport, he found the strength not only to compete in that event but he finished third in the first half of the doubleheader even though he hadn’t driven in competition in eight months. He was dicing for second place when time ran out and the checkered flag dropped, but it was one more podium finish in his illustrious but far too short career.

He competed in the second half of the doubleheader the following day too. His car suffered a broken header in that race, but he still finished in the top 10.

He drove in just one more race. He was a last-minute entry in the HAWK with Brian Redman event July 15 at Road America sanctioned by the Milwaukee Region of the SCCA. He drove a Tiger Racing Ferrari 512M from last place in a 35-car G1-Historic Can-Am field to sixth overall and first in class despite having Stage 4 melanoma.

Brown’s competitive spirit coupled with his friendliness and genuine personality made him a favorite of the fans, his fellow competitors and the media. 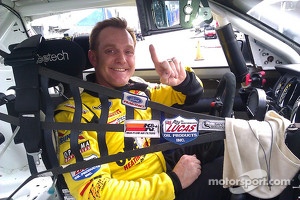 In 2011 he posted five World Challenge GTS victories, 10 top-10 finishes, nine top-five finishes and secured the driver championship with one race remaining on the schedule. That matched Parnelli Jones’ 1970 record-setting single-season victory record in the SCCA Trans-Am Championship for production-based Mustang Boss 302s. Brown led more laps during that season than all other GTS drivers combined, and he also set the fastest lap of the race in seven of the 12 races. He did all this in a production car he transformed into a race car in less than a month with a crew of two. A documentary on the construction of this car entitled “B5141872” was produced by Allan Crocket. The film’s name was taken from the Mustang’s VIN number.

Brown also won the NASA American Iron Extreme (AIX) Championship in 2009. He was the first NASA national race winner ever in AIX in 2006. The year before that he was a winner at the Monterey Historics in a 1961 Chaparral 1. He placed 11th in the 2004 Le Mans Historic 24 Hours in a 1971 Ferrari 512M. He held track records in SCCA World Challenge, American Sedan, ITE, Super Unlimited, American Iron and American Iron Extreme at many famous racetracks such as the Mid-Ohio Sports Car Course, Road Atlanta, Mosport, Mazda Raceway Laguna Seca, Road America, Buttonwillow, Hallet, Mid-America Motorplex, St. Louis and Heartland Park Topeka.

He got his love of the sport honestly.

Kenny Brown owned a European import automotive tuning business when Paul, his eldest son, was born. Over the years Kenny raced everything from sedans to formula cars, and by the time Paul was a teenager the import business had grown into a pro racing and light manufacturing business.

Paul Brown entered his first race at the age of 16, starting in autocross and gymkhana events with his street cars through the local SCCA chapter, and then advancing to open-track events with various clubs. His pro driving career started under his father’s personal instruction in a Kenny Brown Mustang in his early twenties.

His first job in professional racing was working for his father on the Saleen Autosport team in 1986. He helped the team sweep all four categories in the Escort Endurance Series Championship in 1987, which exposed him to other top racers like Steve Saleen, Rick Titus, Scott Pruett, Parnelli Jones, George Folmer and Pete Halsmer, to name a few. That series evolved into the SCCA Pro Racing SPEED World Challenge. Brown competed in this form of motorsports for almost two decades, finishing in the top 10 in over half of the events he ran.

Along the way he also did everything from modifying late-model Mustangs to building complete racing chassis. In the nineties he ventured out on his own to establish HP Motorsports in Omaha, Neb., a Mustang tuning and parts business. At the same time he campaigned a self-funded privateer World Challenge team and earned a reputation for being able to fix anything and keep racing despite a small budget.

At the turn of the century he moved from the Midwest to California to work at Tiger Racing, a vintage racing team formed in 1990 by the couple that would become his in-laws, Tom and Bea Hollfelder, when he married their daughter, Carol Hollfelder, on Sept. 17, 2005. Tiger Racing’s cars range from a pre-war Alfa Romeo Monza to a 1970 Ferrari 512F Le Mans race car. In addition to preparing and maintaining vintage race cars and providing trackside support, Tiger Racing also manufactures carbon fiber and fiberglass aerodynamic pieces and body parts for Ford and other racing customers. Brown’s carbon fiber, aerodynamically designed hoods are now stock pieces on the production Ford Mustang Boss 302S through Ford Racing.

In addition to that work, on the side both Paul and his wife campaigned Mustangs in the World Challenge series. He also prepared and maintained vintage race cars for VSCDA, SRA and VARA events and provided trackside support and luxury car maintenance and repairs through both the Tiger Racing and Paul Brown Racing names.

Other projects included a 2003 ASM Mustang in a joint venture with Ford Research and Development that featured an Aston Martin paddle-shift transmission; a 2000 Saleen SR for World Challenge; a 2005 Mustang for Ford Mobility; several custom Morgan Aero 8 GTRs; a Ferrari 512M; Alfa T33; Devin SS and an Eagle Indy car, to name a few.

A memorial service will be held at a later date.