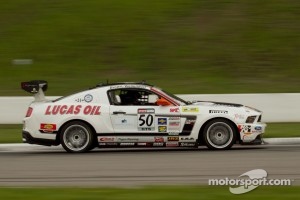 Highlighted by the 2011 Pirelli World Challenge GTS Drivers’ Championship, Brown started his racing career in 1992 in SCCA Club Racing. He made his first SCCA Pro Racing World Challenge start in 1993 at Des Moines, and would run another 41 races through the 2000 season before taking a hiatus from the series. After a handful of starts in 2008-2009, Brown returned for a full slate in with his Tiger Racing/Paul Brown Racing Ford Mustang Boss 302S in 2011.

At the season-opening round at St. Petersburg, Brown earned his first-career pole position and followed that with a first win at Long Beach. Brown would win four more times in 2011 en route to a dominating Drivers’ Championship.

Following the season, Brown was diagnosed with an aggressive melanoma, and began undergoing treatment. The team signed Justin Bell to drive the No. 50 Mustang for 2012 in Brown’s absence. With Bell unable to attend the Canadian Tire Motorsports Park (Mosport) event in June due to a scheduling conflict, Brown returned to the driver’s seat for what would turn out to be the final time. Battling side effects from the cancer treatment, Brown raced to a pair of top-10 finishes, highlighted by a third-place run on Saturday.

“On and off the track, Paul Brown was an inspiration to us all,” SCCA President and CEO Tom Campbell said. “He worked his way up over the years, from a driver fighting for top 10 finishes to a driver fighting for the Championship. He is a true Champion and will always be a part of the SCCA Pro Racing family and our history. Our thoughts are with his wife, Carol, and the rest of his family.”

"I have known Paul since 2000, when we competed together in the Speedvision World Challenge GT series,” WC Vision President & CEO Scott Bove said. “He was an intense competitor but always willing to lend a hand. After a few years off, he and I met again at Mazda Raceway Laguna Seca in 2009 and talked about the need for a new class of racing for the factory-built Mustangs. That conversation led to the development of the Pirelli World Challenge GTS class, in which he won the 2011 Championship. He was an inspiration to all that knew him and he will be missed."

Brown married fellow World Challenge driver Carol Hollfelder in 2005. The couple each came from a racing family. Brown’s father is renowned Mustang tuner Kenny Brown, and Hollfelder’s father, Tom, has been a fixture in North American vintage racing scene for many years and also previously competed in World Challenge. Outside of the driver’s seat, Brown managed the shop at Tiger Racing.

Service arrangements are not yet available.

Mustang teams refuse to race in protest at Mid-Ohio - Video

IMSA TUDOR Championship race should be among the season's most competitive

Corvette Racing at Le Mans: All about preparation