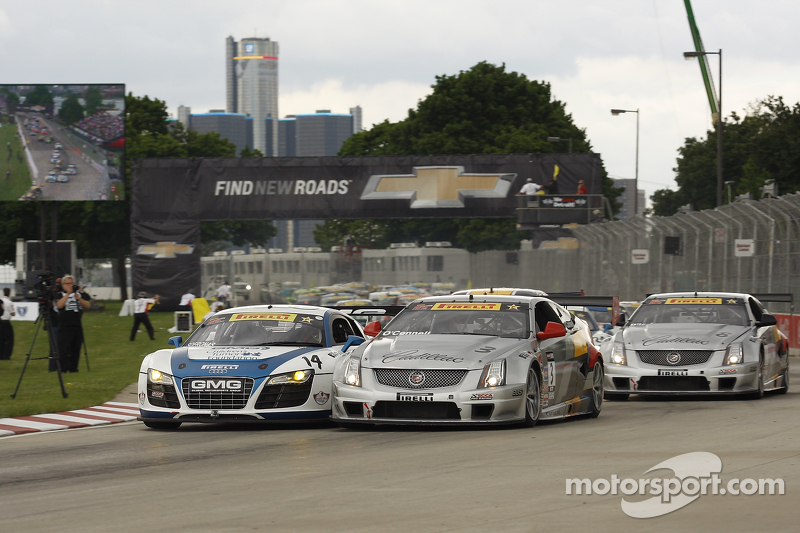 74 cars set to race across the series' four classes

James Sofronas leads the GT Drivers' Championship heading into Lime Rock Park.Lakeville, CT- The Pirelli World Challenge resumes its 2013 season at Lime Rock Park, making a return to the classic Connecticut road course for the first time since 2008. For only the second time this year, all four classes – GT, GTS, TC and TCB – will be in action. GT and GTS classes have a doubleheader weekend with Rounds Eight and Nine, while TC and TCB classes have a tripleheader and Rounds Four, Five and Six. This begins the second half of the season for GT and GTS, while TC and TCB are in action for only the second time this year.

The last time the series visited Lime Rock Park in 2008, two Touring Car races were held, won by Kuno Wittmer and Chip Herr, respectively. Peter Cunningham and Randy Pobst have the best Pirelli World Challenge records at Lime Rock, as each has two prior class wins here (Cunningham in 1993 Class C and in 1998 T1, Pobst in 2002 and 2004 in GT), and at least two prior class poles (Cunningham two, and Pobst three in a row from 2002 through 2004).

Although this marks the first race weekend for Pirelli World Challenge at Lime Rock in five years, more than 40 series drivers racing this weekend have experience at the circuit. The track is known as road racing's top "bullring." Measuring at just more than 1.5 miles, it's all right-hand turns except one. The track's fast, flowing design allows for action-packed racing at every portion of the circuit. Pirelli World Challenge will run the Lime Rock circuit layout that does not include any chicanes.

GT points leader James Sofronas, of Villa Park, Calif. and driver of the No. 14 Mobil1/GMG Audi R8, went winless for the first weekend of four this year last time out in Detroit. Still he scored another podium finish in Round Six and leads the points standings with 849.

The Global Motorsports Group principal will be joined by three other teammates in GT and one in GTS. Los Angeles native Duncan Ende will run the No. 24 STANDD.org/Merchant Services Audi R8 and is one of the more experienced drivers at Lime Rock. Ende has class podiums of second and third place the last two years at Lime Rock while competing in another sports car series; if he improves upon his previous results at the track with a top-step podium finish this weekend it would be his first Pirelli World Challenge victory. The two other GMG Audi R8s include those piloted by Bill Ziegler of Ponte Verde, Fla. in the No. 95 Swisher Racing/GMG entry, stepping up from GTS, and Alex Welch of Englewood, Co. in the No. 08 Spyder/Lasso/GMG car. Welch missed the last round at Detroit.

Cadillac Racing's Johnny O'Connell and Andy Pilgrim have closed to within 146 and 205 points of Sofronas. O'Connell of Flowery Branch, Ga., a two-time winner in 2013, races in the No. 3 Cadillac Racing Cadillac CTS-V.R and is sitting second in the Drivers' Championship. O'Connell will be making his first visit to Lime Rock as part of the Pirelli World Challenge series. He last competed at the historic circuit in another series in a Corvette C6.R in 2010. Meanwhile his teammate, Pilgrim, of Boca Raton, Fla. in the No. 8 Cadillac Racing Cadillac CTS-V.R, is still in search of his elusive first win this season. Pilgrim though has scored podium finishes in four of the last five races and sits fourth overall in the GT Drivers' Championship

Two drivers have their 'home' races this weekend at Lime Rock Park. Both are from Boston, and both race the Mercedes-Benz SLS AMG C63. Peter LeSaffre returns for Green Hornet Racing in the No. 33 Mercedes after missing Detroit. Tim Pappas, who has finished in the top five in three of the last four races, drives the No. 54 Black Swan Racing Mercedes. At Long Beach this year, Pappas raced with a "Boston strong" Red Sox decal on his hood to pay tribute to the victims of the bombings at the Boston Marathon in April. No doubt both drivers will be inspired to post a huge result on home soil.

Although Jack Baldwin, of Marietta, Ga., maintains the GTS Championship lead heading into the Lime Rock race weekend, with 769 points, several drivers are closing in after the doubleheader in Detroit. Baldwin's been the model of consistency in the No. 73 Motul/StopTech/Foametix Porsche Cayman S for GTSport Racing with Goldcrest, with six straight podium finishes to open the season and a fifth-place in Round Seven. His teammate and long-time Trans-Am Series car owner Buz McCall, of Boca Raton, Fla., will make his first Pirelli World Challenge Lime Rock start in the No. 72 Motul/StopTech/Foametix Porsche Cayman S.

The big mover in the points after Detroit was Mark Wilkins, of Toronto, in the No. 38 Kia Motors America Kia Optima. Wilkins won Round Six and finished second in Round Seven at Detroit to close to within 86 points of Baldwin. Teammate Nic Jonsson, of Sweden in the No. 36 Kia Motors America Kia Optima, will have the chance to redeem himself after a hard luck weekend in Detroit. Jonsson made contact with the No. 42 Acura TSX of Peter Cunningham on the start in Round Six and spun into the wall heavily damaging the car forcing him out of the rest of the weekend.

Defending GTS champion Cunningham, of Milwaukee, Wis. in the No. 42 Acura/HPD/RealTime Acura TSX, also seeks a bounce back weekend at Lime Rock. Cunningham's wheel was damaged after Jonsson's contact, and the damaged wheel led to one of the rare DNFs in his Pirelli World Challenge career, dropped him to 199 points behind Baldwin. That said, he recovered to finish fourth in Round Seven and no doubt is motivated to secure his first win of the season. Teammate, Nick Esayian, of San Diego, in the No. 34 Acura/HPD/RealTime/Red Line Oil Acura TSX, has five prior starts at Lime Rock and five top-10 finishes in the first seven races this year.

The Chevrolet Camaro contingent should thrive at Lime Rock as it's a track where top speed isn't as big a factor as braking and handling. It's been a feast-or-famine season for Andy Lee of Colorado Springs, Co. in the No. 20 Best IT Racing Chevrolet Camaro, who has three podium finishes but also three finishes of 21st place or worse in the first seven races. His teammate is Harry Curtin, of Buffalo, N.Y., in the No. 29 Best IT Racing Chevrolet Camaro. This is the closest thing to a home race for Pirelli World Challenge series sophomore Curtin this year, with upstate New York not too far up the road from the picturesque Lime Rock bullring.

Five drivers who were not at the Detroit race are at Lime Rock this weekend. They include Mark Klenin, of Lonetree, Co., in the No. 62 Schomp BMW/KaR Racing BMW 2009 M3 E92; Drew Regitz, of Denver, Co., driving the No. 63 AssociationVoicePremier Copier/KaR Racing BMW M3 E46; Bradford S. Sofronas, of Pound Ridge, N.Y., driver of the No. 88 Greek Brothers Racing/GMG BMW M3 E46; Don Istook, of River Oaks, Texas, in the No. 01 Milltek Exhaust/STaSIS/REVO Audi TT RS; and Steven Goldman, of Woodcliff Lake, N.J., in the No. 05 ZSA Motorsport & Trade Manage Porsche Cayman S.

Karl Thomson's Compass360 Racing team stormed out of the gate at the Circuit of the Americas in Austin, Texas. The team took all three race wins and swept the podium in Rounds Two and Three of the Touring Class-class season. Now, the class is back in action for a tripleheader at Lime Rock as the field seeks to knock C360R off its axis.

As this is the closest location to a home event for Sandberg, he'll be extra motivated to deliver another victory or two in this weekend's TC class tripleheader. Rookie Remo Ruscitti, of Vancouver, Canada, completes the Compass 360 lineup in the No. 71 C360R/Ultimate Racing/HPD Honda Civic Si. Ruscitti finished on the podium in all three races at Austin and seeks his first win of the season this weekend.

Jon Miller, of Orlando, Fla., driver of the No. 68 Titan Motorsports/Loudbasstard Shea Racing Honda Civic Si, enters the Lime Rock weekend fourth in points after three top-five finishes at COTA. He is in search of his first podium finish this weekend. The same story applies to Sarah Cattaneo, of Scottsdale, Ariz., in the No. 43 IDoBorrow.com Honda Civic Si. She finished sixth in all three races at COTA, but ranks fifth in points.

Defending TC class champion Michael Cooper, of Syosset, N.Y., is entered for this weekend's tripleheader in the No. 1 Atlanta Motorsports Group Mazda MAZDASPEED 3. Cooper did not race at Austin. Robb Holland, of Denver, Co., also makes a welcome return to the Pirelli World Challenge ranks as a teammate to Emich in the No. 87 Emich VW/HPA Motorsports Volkswagen Jetta.

Ernie Francis Jr., of Davie, Fla., in the No. 98 Hydraulic Jeans Mazda2, swept the opening tripleheader weekend of the Touring Car B-Spec class at Circuit of the Americas. Now the 15-year-old phenom looks to extend his winning streak at Lime Rock Park.

Those who came closest to knocking Francis Jr. off his perch at Austin were Charlie James, of Joplin, Mo., in the No. 0 SafeRacer Mini Cooper, and Robbie Davis, of Dallas, in the No. 37 MINI USA/MINI Financial Services Mini Cooper. James finished second in all three races at Austin and trails Francis Jr. by 108 points, while Davis was third in Rounds 2 and 3 at Austin. There are still 11 races to go in the 14-race TCB schedule.

Others hoping to stop Francis Jr. in the 20-car class include a pair of former Lime Rock race winners in Joel Lipperini of Pittston, Penn., in No. 81 RaceLabz/Honda/HPD/Raceshopper Honda Fit and Peter Schwartzott, Sr., of White Plains, N.Y., in the No. 4 Peter Schwartzott Racing Chevy Sonic. Lipperini finished fourth in two of three races in Austin and ranks fourth in the TCB class points; Schwartzott, Sr., has three prior Pirelli World Challenge starts at Lime Rock with a best finish of sixth place in T2, in 1996.

It's a family affair in TCB as Francis's father Ernie Sr. and Schwartzott's son Peter Jr. are also entered at Lime Rock, in the No. 2 Hydraulic Jeans Mazda2 and No. 04 Peter Schwartzott Racing Chevy Sonic, respectively.

Other Minis in the field after James and Davis includeMike Asselta, of Overland Park, Kan., driving the No. 7 SafeRacer Mini Cooper, Tyler Palmer, of Oceanside, Calif., in the No. 24 BlackForest Porsche/Mobil 1 Mini Cooper and Johan Schwartz, of Denmark, in the No. 01 Endurancekarting.com Mini Cooper.

Three other Hondas on the grid, seeking a bounce back after a tough weekend in Austin, include the pair of Shea Racing entries. Shea Holbrook, Groveland, Fla., will drive the No. 67 TrueCar/Hendrick Honda/Lucas Oil Honda Fit with teammate P.J. Groenke, of Toronto, in the No. 66 MulliganGold/Tundra/Verax.ca Honda Fit both looking to improve on low top-10 results. Jonathan Baker, of Hollywood, Md., races in the No. 32 32 Racing Honda.

Two other Mazdas are driven by Fernando Seferlis, of Panama, in the No. 77 Compulab Mazda 2, and David Alejandro, of Pembrook Pines, Fla., in the No. 99 Claims Support Inc.com Mazda.