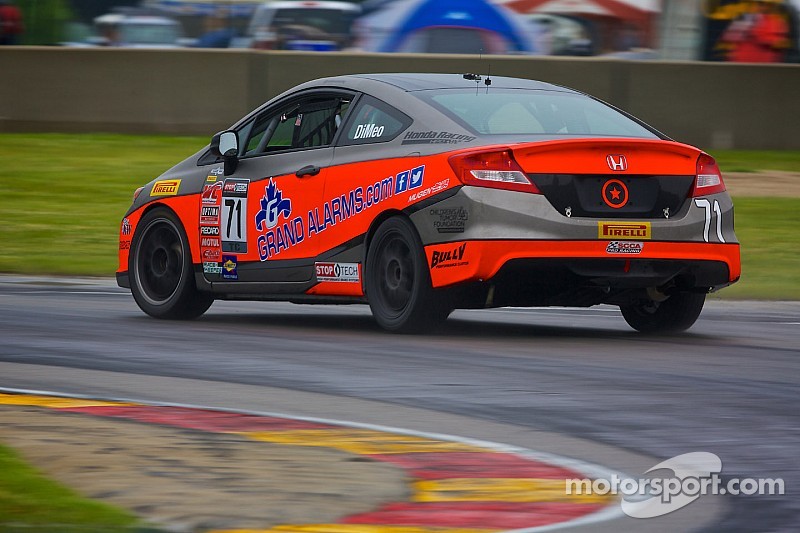 The Pirelli World Challenge makes its first trip to Brainerd, with the Touring Car, Touring Car A and Touring Car B-Spec classes competing in the Brainerd International Raceway Brought To You by Kia weekend. The three classes run a pair of 40-minute sprints this Saturday and Sunday for Rounds 11 and 12 of the 2014 season.

Michael DiMeo (in photo) has dominated the TC class, but the TCA and TCB title battles are well and truly on the line this weekend, the penultimate weekend of the year. The trip to Brainerd is the third and final feature weekend of the season for the TC classes, who starred, along with GT, GT-A and GTS classes at Mid-Ohio earlier this month.

With his eighth win of 2014 achieved in Round 10 at Mid-Ohio, Michael DiMeo, of Toronto, can now set a Pirelli World Challenge series record this weekend in the No. 71 Grand Alarms Honda Civic Si.

DiMeo is currently tied with Peter Cunningham for most single-season wins in series history. A ninth would set the new record and a tenth would make the 22-year-old Canadian the first driver in the 25-year history of the series to win double digit races in a single season. DiMeo has mathematically secured the Touring Car class championship, so his assault on the record books is his remaining goal now.

Looking to stop him are his Compass360 Racing teammates. Team principal Karl Thomson, of Toronto, returns in the No. 72 CTF.org/Touge Tuning/Racing4Research Honda Civic Si after sitting out at Mid-Ohio.

Fred Emich, of Denver, Col., is also entered in the No. 30 Emich Racing Volkswagen Jetta GTI. Making his first start of 2014 and rounding out the class is Michael Pettiford, of Louisville, Col. in the No. 41 Go 4 It Racing/Hawk Brakes Pontiac Solstice.

The battle for the TCA class championship remains tight between Jason Wolfe, of Mt. Vernon, Ohio, in the No. 36 Wolfe Trucking Kia Forte Koup and Shea Holbrook, of Groveland, Fla.,in the No. 67 TRUECar/Lucas Oil/Radium Honda Civic Si. Holbrook has five wins and Wolfe four in the 2014 season, but penalties issued to Holbrook throughout the year see her 33 points behind entering the Brainerd weekend.

The spoilers, as they have been all season in TCA, are Mazda drivers Jason Cherry, of Gambrills, Md., in the No. 13 Autism Society of America/Avpro/Purposeful Architecture Mazda MX-5 and Ernie Francis Jr., of Dania, Fla., in the No. 98 Breathless Performance Mazda MX-5. Both teenagers have shown speed, but only Francis Jr. (Round 4 at Canadian Tire Motorsport Park) has been able to break the Wolfe/Holbrook stranglehold on victory lane this season. They try to do so again at Brainerd.

Neither Brian Price, of Middletown, Va., in the No. 51 Unlimited Racing/RP Performance Honda Fit nor Nathan Stacy, of Owasso, Okla. in the No. 14 MDG/Ford Racing Ford Fiesta, won at Mid-Ohio last race weekend, but the two were part of a great podium scrap in both races. Price leads Stacy by 75 points, 995-920, entering the weekend.

Third and looking to close is Tyler Palmer, of San Diego, Calif., in the No. 37 MINI USA/Mobil 1/Flying L Racing/ThePainter'sFriend.com/Discount Tire Mini Cooper, who won one of the two Mid-Ohio races and currently sits 113 points behind Price. Fourth and needing the three ahead of him to stumble to make up the 168-point deficit to Price is Paul Holton, of Tallahassee, Fla., in the No. 65 Radium/TRUECar/Lucas Oil Honda Fit. Holton's full-season teammate at Shea Racing is PJ Groenke, of Toronto, again in the No. 66 Verax.ca/Tundra Tech/Mulligan Gold Honda Fit.

Fifth-placed Jason Fichter, of Jupiter, Fla., in the No. 7 Surf Fire & Security Mini Cooper, will have a teammate at Breathless Performance this weekend. Local driver Chris Holter, of Rochester, Minn., will make his season debut in the No. 9 American Brain Tumor Association/GoPuck/Fuel Clothing Mazda 2.

The Mid-Ohio Round 10 race-winning Garrett Racing/Drive4Diabetes entry continues with Johan Schwartz, of Denmark, set to drive the No. 12 Promatex/ADA/Animas/American Honda Honda Fit in both races this weekend.

The No. 16 Morrie's Mazda Motorsports Mazda 2, driven by John McCarthy, of Hudson, Wis. and Michael Ashby, of Buffalo, Minn. Ashby finished fourth and fifth in his only starts of the year at Road America in June. Joining Ashby as a local driver competing on home soil is Tom Noble, of St. Louis Park, Minn., in the No. 24 4R Motorsports/West Real Estate/Hawk Brakes Mini Cooper.

The charity No. 00 FIAT USA/Pirelli Tire/SRT Motorsports FIAT 500, entered by Scott Kuhne's 4R Motorsports, rounds out the 13-car TCB field with a pair of drivers making their first start in the Pirelli World Challenge. Driver, automotive writer and TV presenter Brian Makse, of Toronto, and Dave Drimmie, also of Toronto, will share the No. 00 car. Drimmie is part of the Pirelli World Challenge marketing and communications staff.