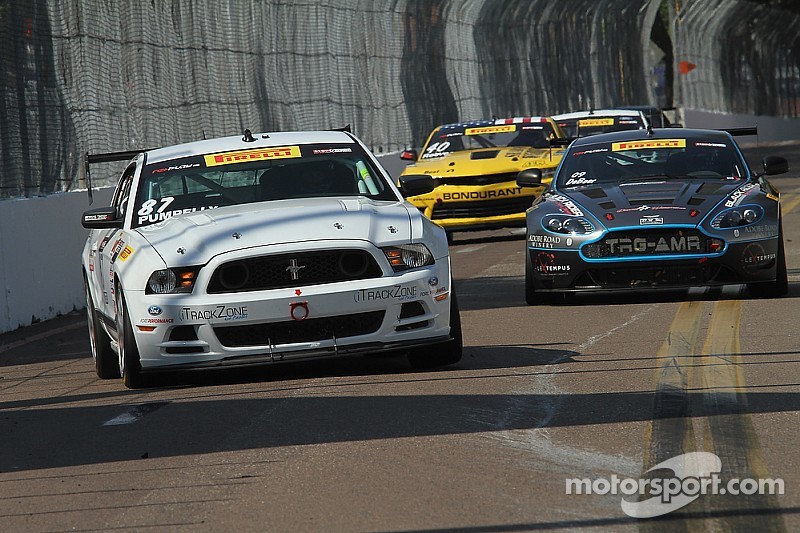 ST. PETERSBURG – Spencer Pumpelly drove like a man with something to prove in round 4 of the Pirelli World Challenge GTS series at the Cadillac Grand Prix of St. Petersburg, taking his plain white iTrackzone.com Ford Mustang Boss 302 to the front and stretching a lead of three seconds at the checkered flag over second place, the Calvert/Phoenix Mustang of Andrew Aquiante.

Third was Kurt Rezzetano in still another Mustang, and fourth was Friday’s winner, Dean Martin, in – well, suffice it to say the PWC technical department might be adding some weight to the Mustangs before the next race. The first non-Mustang was in fifth, the Blackdog Chevrolet Camaro Z/28 of Michael Cooper.

In sixth was the first non-Detroit ponycar – Ben Clucas in his Kia Optima four-cylinder, as he and co-driver Mark Wilkins continue to run with, and often beat, the big boys. Seventh was the Aston Martin Vantage GT4 of Kris Wilson. Eighth was Wilkins.

Rezzetano was second on Friday, and Pumpelly was third.

“Yesterday was a learning process,” Pumpelly said, as it was his first time in the car. “Today we used everything we learned yesterday, and the car was just fantastic. It’s good to be back on top.”

Today’s race was slowed by a full-course caution on lap 3 when Dan Martinson hit the wall. He finished last in the 20-car field.

The PWC GTS class is done for the weekend at St. Petersburg, but the GT class will race