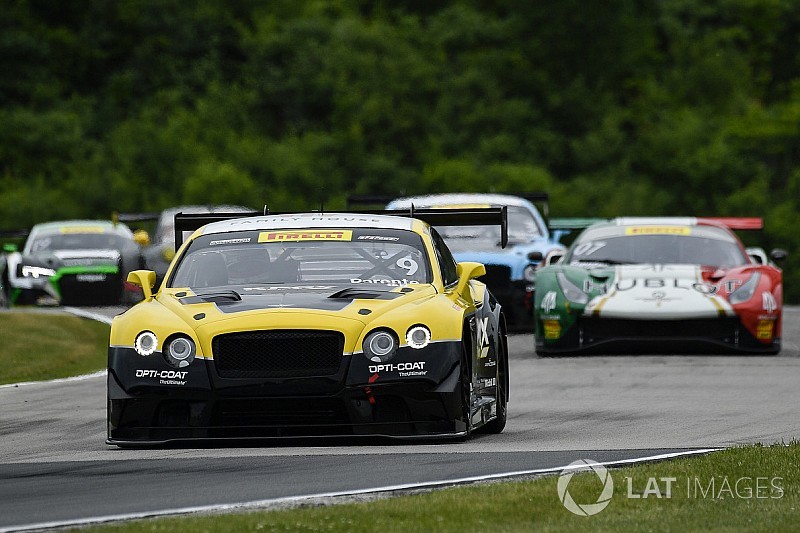 Alvaro Parente drove his K-PAX Bentley Continental to a relatively untroubled victory, his second of the year, after dominating the GT class in a combined GT/GTS race.

Daniel Mancinelli’s Ferrari started from pole position for TR3 Racing alongside Michael Christensen’s Alegra Motorsports Porsche 911. However, after a brief full-course caution at the start of the race, Alvaro Parente’s K-PAX Bentley Continental charged to the front and immediately started pulling away from his nearest pursuers, Toni Vilander’s R Ferri Motorsport Ferrari and Mancinelli.

Following a mid-race yellow for a GTS collision that saw Preston Calvert’s Panoz off the course, Parente resumed his charge away from the Ferraris, but Scott Hargrove’s Pfaff Motorsports 911 split the Italian cars to grab third.

Just four laps later there was another yellow, this time for Vinnie Allegretta sending his PF Racing Ford Mustang off course at Turn 1. However, at the restart with seven minutes to go, Parente easily maintained his advantage over Vilander who just about held off Hargrove, with Mancinelli and Christensen content to retain fourth and fifth to the checkers.

The closing laps featured a fabulous battle in the GT Amateur class as Martin Fuentes in the Squadra Corse Garage Italia Ferrari 488 desperately tried to hold off Parker Chase’s TruSpeed Autosport Audi R8. Chase grabbed the advantage with two laps to go, yet in Turn 5 on the final lap, Fuentes retook the class lead. In fact, Chase’s lost momentum almost cost him P2 as Anthony Imperato’s Wright Motorsports Porsche was only half a second behind at the checkered flag.

In GTS, Ian James’ polesitting Panoz worked hard to hold off Mark Klenin’s KPR McLaren 570S for much of the race, but behind them there was a mighty battle that would ultimately have an effect at the front.

James held off Klenin’s McLaren quite comfortably at the restart with seven minutes to go, while Clay used his BMW’s superior speed to beat Buford’s Mustang into Turn 5.

At Turn 8, Sofronas displaced Klenin by diving down the inside and braking impossibly late, and he zoomed onto James’ tail. However, the Panoz driver’s composure – plus Sofronas’ awareness that a major title rival, Lawson Aschenbach (Blackdog SpeedShop Chevrolet Camaro) had already been taken out of the reckoning by a collision – meant there wasn’t likely to be an order change before the end.

Klenin, who’d not only ceded runner-up slot to Sofronas but also lost third place to Gottsacker, nonetheless held onto fourth in GTS and top Amateur ahead of Clay and Alan Brynjolfsson, whose Volt Racing Mustang passed Buford’s similar car before the checkered flag.