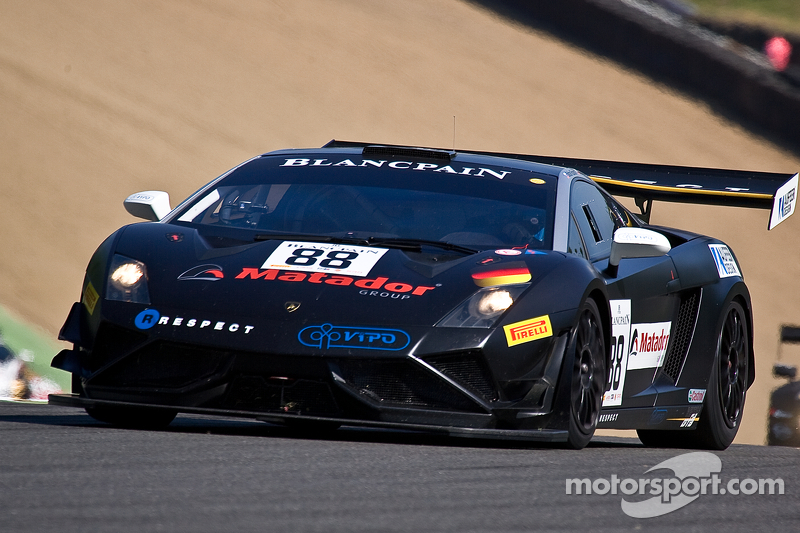 The 2014 Pirelli World Challenge season, the 25th anniversary of the championship, is shaping up to be one of the most exciting, unpredictable seasons on record. As the GT, GT-A and GTS categories head to Belle Isle Park in Detroit for Rounds 5 and 6, and the Cadillac V-Series Challenge at Belle Isle, no one team, driver or manufacturer has a clear edge. Across the three categories, there have been four different winners in as many races.

Palmer is the only driver with two wins as he scored the inaugural GT-A triumph at St. Petersburg, but Michael Mills in the EFFORT Racing Porsche GT3 R, Nick Mancuso in the R. Ferri Motorsports Ferrari 458 Italia GT3 and Marcelo Hahn in the Reiter Engineering Lamborghini Gallardo FL2 have made it four different winners in the first four GT-A races as well.

As the series heads to the 2.3-mile, 13-turn street course in Detroit, expect more surprises and great battles. The classic American muscle and might of Cadillac, Chevrolet and Ford seek to defend their home turf, while the international invasion of cars from around the world like Audi, Ferrari, McLaren, Kia, Porsche, Aston Martin and others want to win in the Motor City. And with the championship battles tight in all three divisions as well, this is going to be a barnburner weekend of action.

On the strength of consistency, Anthony Lazzaro, of Atlanta, in the No. 61 R. Ferri Motorsports Ferrari 458 Italia GT3, enters the weekend with the points lead. He has 439 points, and has a first, a second, a third and a fourth-place finish in the first four races. He won Round 3 at Barber, but will no doubt be primed to bounce back after a mistake in Round 4 cost him a weekend sweep.

Lurking and set to pounce on home soil are the pair of Cadillac Racing CTS-V.Rs. In the No. 3, two-time defending GT class champion Johnny O'Connell, of Flowery Branch, Ga., has a sterling record at Detroit the last two years. He won both 2012 races and then won the first of two races last year on the revised course. Meanwhile teammate Andy Pilgrim, of Boca Raton, Fla. in the No. 8, has also been consistent with two runner-up finishes and a fifth at Barber. He could be a smart pick to make it five winners in as many races. O'Connell, on 393 and Pilgrim, on 376, sit second and third in the points.

The driver looking to make it back-to-back wins is Andrew Palmer, of Chicago, in the No. 21 GMG Racing Audi R8 Ultra. His last lap pass on Lazzaro to take the Round 4 win was a cagey move well beyond his 19 years; he'll be looking for more of the same this weekend.

Palmer's and Lazzaro's respective teammates should also figure into the equation. GMG Racing team principal James Sofronas, of Villa Park, Calif., has opened the season with a single fourth, fifth, sixth and seventh in the No. 14 Spyder/The Thermal Club Audi R8 Ultra. He finished third in race two here last year, and an encore would mark his first podium of 2014.

Meanwhile like Palmer, an emerging star in GT is Nick Mancuso, also of Chicago, in the No. 16 R. Ferri Motorsports Ferrari 458 Italia GT3. Mancuso was promoted into GT after an overall third place finish in Round 3 at Barber, a race where he scored the overall pole and led the first 16 laps. Sofronas and Mancuso are fifth and sixth in points heading into the weekend.

In addition to the aforementioned 2014 headlines, we come next to the driver who has made a wealth of headlines over the Pirelli World Challenge series' 25-year history: seven-time champion Peter Cunningham. Cunningham, of Milwaukee, Wis., makes his season debut with the brand new No. 42 Acura/RealTime Racing Acura TLX GT, which the team recently completed testing on. Cunningham no doubt will be seeking two solid race finishes, particularly after an up and down Detroit race weekend last year that saw the veteran driver only complete 11 laps in Round 6 because of contact and resulting mechanical issues. Cunningham though bounced back and finished fourth the next day and will be looking for that same strong result piloting his new racecar.

Two other talented chargers who you can't overlook either are Mike Skeen, of Charlotte, N.C., and Tim Bergmeister, of Langfeld, Germany. Skeen continues to challenge the leaders in the No. 2 Hawk Performance Audi R8 Ultra for CRP Racing and looks to translate practice pace into a result; for Bergmeister, in the No. 31 EFFORT Racing Porsche GT3 R, it would appear as though he is poised to break through after his best weekend yet in Pirelli World Challenge last time out at Barber.

The new-for-2014 GT-A subcategory has done exactly what it set out to do and then some through four races. It's seen two drivers advance into the GT category on the strength of overall podium finishes, which has then left it to a host of talented gentlemen drivers to battle for the top of the GT-A heap.

And what that means is coming into Detroit, the top three GT-A classified drivers are separated by only 20 points. Michael Mills, of Angleton, Texas, has held the early pace advantage thus far in the No. 41 EFFORT Racing Porsche GT3 R and is the only one in the top three with a win this year (Long Beach).

But nipping at his heels are Tim Pappas, of Boston, Mass. in the No. 54 Black River Caviar Mercedes-Benz SLS AMG GT3, and Henrik Hedman, of Ft. Lauderdale, Fla. in the No. 10 DragonSpeed Ferrari 458 Italia GT3. Pappas scored two podium finishes at Barber, and Hedman has two podium finishes this season. They're tied on 205 points, 20 behind Mills.

Seeking his second win in a row is Marcelo Hahn, of Sao Paulo, Brazil in the No. 0 Reiter Engineering Lamborghini Gallardo FL2, who won Round 4 at Barber. Hahn missed Long Beach but is still within 83 points of Mills in seventh in class, and could easily close the deficit.

GMG Racing is back to three GT-A entered Audis. Bill Ziegler, of Ponte Vedra Beach, Fla., will race at Detroit with his No. 95 Swisher Racing/GMG Audi R8 Ultra for the first time after racing in GTS last year. Teammate Bret Curtis, of Austin, Texas in the No. 32 Valspar Paint/Spectra Resources/United Steel Supply Audi R8 Ultra returns after missing Round 4 at Barber due to injury. Brent Holden, of Newport Coast, Calif., makes his second appearance of 2014 in the No. 44 GMG Racing Audi R8 Ultra, after also racing at Long Beach.

Dan Knox, of Pilot Point, Texas, sits fifth overall in the GT-A drivers' championship and will look to climb the ladder as he pilots his SRT Viper, the No. 80 ACS Manufacturing Inc./Performance SpeedTech SRT Viper GT3-R.

GTS represents another case of true American muscle vs. international flavor. With 24 cars, it's the biggest class on offer this weekend at Detroit, and those flying the flag of either the Bowtie or the Blue Oval have bragging rights to uphold.

Three of the four GTS winners thus far in 2014 have come from international brands, Kia and Porsche. Both Kinetic Motorsports drivers, Nic Jonsson and Mark Wilkins, have won thus far. So too has GTSport Racing with Goldcrest Motorsports' Jack Baldwin. They're tight in points with Wilkins on 376, Jonsson on 363 and Baldwin on 361 entering the weekend.

Shifting to the American muscle, for Chevrolet, they have two potential race winners and three looking for breakthrough efforts. Andy Lee, of Colorado Springs, Col., is perhaps due some luck in the No. 20 Crown Seven/BestIT Chevrolet Camaro; he's a two-time winner and three-time polesitter at Detroit in the last two years. Defending class champion Lawson Aschenbach, of Palm Beach Gardens, Fla., has not won either of the last two years in Detroit and seeks to rectify that this weekend in the No. 1 Blackdog Speed Shop Chevrolet Camaro.

Aschenbach's teammate, Tony Gaples, of Libertyville, Ill. in the No. 11 Blackdog Speed Shop Chevrolet Camaro is one of only two drivers in GTS with four top-10s in as many races to start the year. Lee's teammate, rookie Geoff Reeves of Cleveland, Ohio, will make his first trip through these streets in the No. 40 Shadow Works/BestIT Chevrolet Camaro. Lastly local driver Todd Napieralski, of Chelsea, Mich., in the No. 39 TREMEC/SKF/Backstreet Performance Chevrolet Camaro makes his first start of 2014 this weekend.

Martin and Udell finished on the podium in the second race at Detroit last year; Roush Jr. and Buffomante have a runner-up finish apiece this year. All four, on paper, should be podium contenders.

Always Evolving Racing returns after missing the Barber weekend with David Sterckx, of Brussels, Belgium and Erik Davis, of Burbank, Calif., in the Nos. 52 and 75 Always Evolving Racing Ford Mustang Boss 302S cars. The team spent the month of May supporting James Davison's debut in the Indianapolis 500, as the Australian raced with KV Racing Technology. Lastly, the single DWW Motorsports entry of Chris Outzen, of Sudbury, Mass., rounds out the 10-car Ford lineup in the No. 87 iTrackZone Ford Mustang Boss 302S.

Brian Kleeman, of Baltimore, Md., rounds out the 24-car class in the No. 07 Nissan/DXD Clutches/Aeromotions Nissan 370Z. Kleeman, who has had horrible luck with mechanical issues thus far in 2014, should have a revised livery of his car this weekend.

Detroit: Lazzaro has to defend points lead against his own teammate