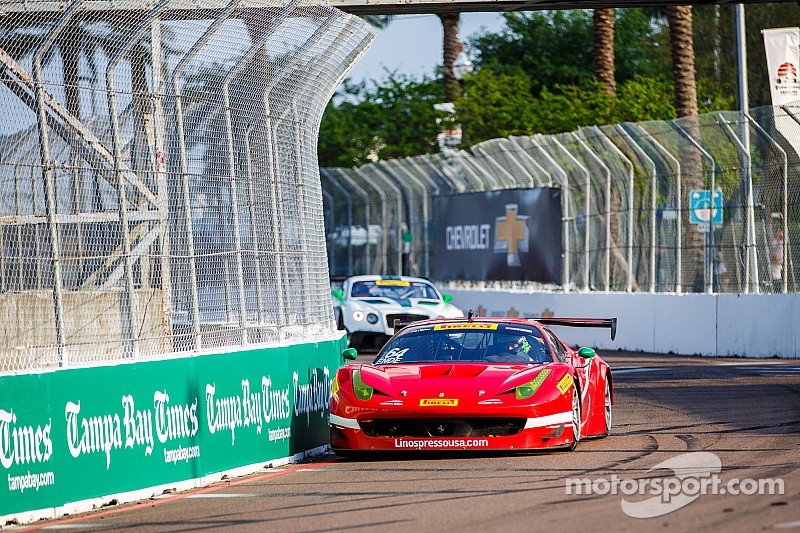 Los Angeles, Calif. - The trio of Scuderia Corsa drivers competing in the Pirelli World Challenge had much to deal with this weekend including rain, long caution periods, and a large number of cars in the tight confines of the streets of downtown St. Petersburg. Quickly becoming known as one of the most competitive sports car championships in the world, many of the PWC competitors did not survive the weekend, but all three Scuderia Corsa Ferraris made it back on the trailer in one piece.

At the wheel of the no. 65 Scuderia Corsa Ferrari 458 Italia, Mike Hedlund passed several cars during Saturday's race to move up to a strong tenth position overall. On Sunday, he finished in 12th position.

"I had some really great battles in St. Petersburg," said Hedlund. "A big thanks to the Scuderia Corsa guys, they gave me a car that was clearly faster than the driver! I wasn't too happy with how qualifying went on Friday so I was happy to finish in tenth position on Saturday. I'm glad we showed some great pace and I'm looking forward to Long Beach."

The Ferraris do really well on long runs, but with such limited green flag laps, we didn't have a chance to show our strength.

Duncan Ende, in the no. 64 Scuderia Corsa / Lino'spresso USA Ferrari 458 Italia, finished in 19th position in Saturday's race and 17th in Sunday's race.

"After having a disappointing weekend in Austin, I was hoping to get through both races in St. Pete in one piece and grab some points," said Ende. "More or less, I was able to manage that this weekend. I don't think either race's finishing position fully reflected where we had pace to run, but catching and passing some of the big bore cars out there proved to be rather different propositions."

The potential for a podium in the GT-A class was dashed for Martin Fuentes in Sunday morning's race. While running in third position, Fuentes's no. 07 Scuderia Corsa / Hublot Ferrari 458 Italia was hit from behind causing him to spin. Fuentes was able to get his Ferrari going again, but fell well down the order and finished in 24th position.

"It was a complicated weekend for me, with many ups and downs," said Fuentes. "We had very good race pace, but had contact from behind while I was running in third position. I was able to recover but it was too late in the race to get back to a good spot. We are now looking forward to Long Beach and to get on that podium."

Team manager Gary Cummings had many reasons to be pleased with his team's performance after two challenging races in Florida.

"Having the surprise rainstorm before qualifying put us a bit on the back foot - it put our cars toward the back of the field in the first race which made it difficult to set a fast time to qualify for Sunday's race," said Cummings. "The Ferraris do really well on long runs, but with such limited green flag laps, we didn't have a chance to show our strength. We know that we have the speed and we are looking forward to showing that in Long Beach."

The Pirelli World Challenge races from St. Petersburg will be broadcast on Sunday, April 5 at 5:00 PM ET on CBS Sports.