Mixed results in challenging doubleheader for the no. 24 STANDD / Merchant Services Audi R8. 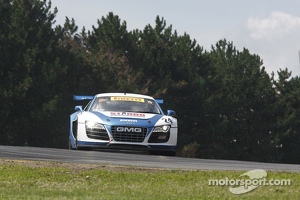 However, between the green light and the checkered flag in Sunday's 50-minute race, Ende was involved in one of the bigger GT battles of the season, with Ende and teammate James Sofronas' Audi R8s battling with the three Cadillacs of Johnny O'Connell, Andy Pilgrim, and Jordan Taylor, as well as the Chevrolet Corvette of Mike Skeen.

As the six cars battled, Ende would trade positions with Pilgrim and Taylor- ending the race with silver Cadillac paint on the doors and rear bumper of his Audi. Contact with Pilgrim in Mid-Ohio's 'Keyhole' would cause Ende to lose touch with the group, eventually finishing the race in sixth position, a few seconds adrift of the battling group.

"That was a really hard way to end up where we started," said Ende, who started Sunday's race in sixth position. "But that was a really fun battle, especially in the first half of the race when I had Jordan behind me and Skeen and Pilgrim in front of me. Things got really busy once we got into GTS traffic. I managed to get past Pilgrim into turn one but he hit me going into turn two, so I lost that position right away and had a little bit of tire rub. So after all that, we finished in sixth - not bad, but we were hoping for more."

After finishing a disappointing 12th in Saturday's race due to a punctured tire, a race where he struggled with the balance of his Audi, Sunday's run was a step in the right direction for Ende.

"Talk about a forgettable race," said Ende. "The car didn't have the balance I expected and then I had a flat tire which took us completely out of it. We just seem to have been missing a little bit in the last couple of races, so being in the mix with everybody again on Sunday meant we were back on the pace. That being said, we want to be on the podium and we have two more chances in this World Challenge season - at Sonoma and Houston."

Ende will compete in the next American Le Mans Series race at Road America this weekend, partnering with Bruno Junquiera in the no. 9 RSR Racing Oreca FLM09 in the Prototype Challenge class. The next World Challenge round will be August 23-25 at Sonoma Raceway in Sonoma, California.