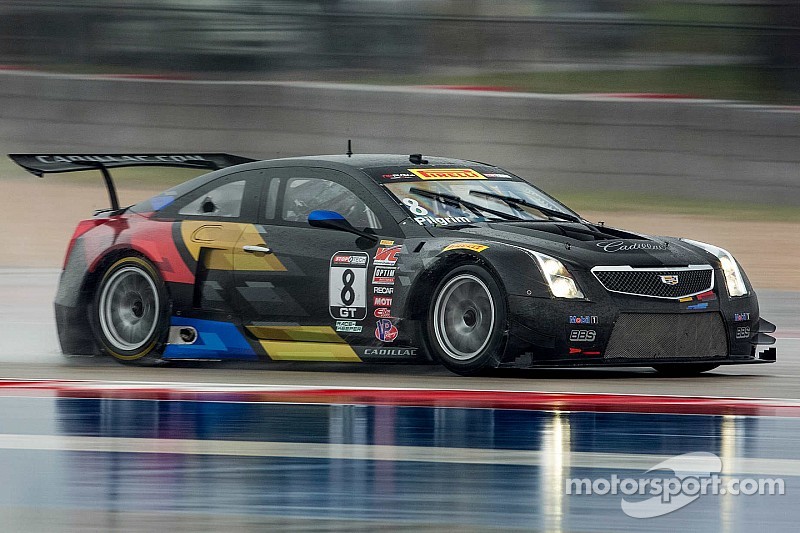 Since 1990, the series has competed at St. Petersburg 10 times; the 2015 visit marks the sixth straight year and the 11th time the series will race at the Florida street course. With 43 cars entered in the GT/GTA/GT Cup classes, it will be interesting to see how drivers transition from racing at the Circuit of The Americas (COTA) – a circuit that was designed with a deliberate widening of corners, to encourage drivers to follow multiple racing lines – to the narrow confines and concrete barriers of the street circuit at St. Petersburg.

In GTS, there should be some great battles among the highly talented 20 drivers entered. Qualifying will be important as seven of the last nine GT wins from 2010-14 have come from the pole. In GTS, the nine-race average race winner's starting position is 2.777.

Kevin Estre, of Lochau, Austria, in the No. 9 K-PAX Racing McLaren 650S GT3 comes into St. Petersburg as the points leader in class, after a dominating Round 2 win at COTA. In rainy conditions, Estre gapped second place finisher EFFORT Racing's Ryan Dalziel, of Windermere, FL by more than 30 seconds to take the checkered. Estre had a very good debut weekend in Pirelli World Challenge registering a fourth in Round 1. Estre enters the weekend with 230 GT drivers' points. Teammate Robert Thorne, of Littleton, CO, will pilot the No. 6 K-PAX Racing McLaren 650S GT3.

Dalziel in the No. 31 EFFORT Racing/World PMO Porsche 911 GT3R comes into the weekend trailing Estre by six points after back-to-back second place finishes at COTA. R. Ferri Motorsport's Olivier Beretta, of Monte Carlo, in the No. 61 Ferrari of Ontario/Toronto/Alberta Ferrari 458 GT3 Italia won the Round 1 race and comes into the race weekend third in GT drivers' points with 209.

Nicky Catsburg, of Voorthuizen, Netherlands in the No. 25 Blancpain Racing Lamborghini Gallardo GT3 FL2 made his Pirelli World Challenge debut at COTA starting on pole for both races but ended up finishing 10th and 3rd respectively. He comes into St. Pete fourth in drivers' standings.

Defending Pirelli World Challenge 2014 GT champion Johnny O'Connell, of Flowery Branch, GA., enters the weekend 5th overall in drivers' points after a very respectable debut in his all-new No. 3 Cadillac Racing Cadillac ATS-V.R. O'Connell finished 3rd and 7th at COTA. O'Connell has had success at St. Petersburg in the past having won the 2012 race. Teammate Andy Pilgrim, of Boca Raton, FL., will be in the No. 8 Cadillac Racing Cadillac ATS-V.R.

Mike Skeen, of Charlotte, NC, the 2014 runner up to O'Connell, will pilot CRP Racing's No. 2 DeVilbiss/Hawk Performance Audi R8 Ultra. Skeen sits 8th in drivers' points coming into the Round 3 and 4 races.

Seven-time Drivers' Champion Peter Cunningham, of Milwaukee, WI, comes off a hard luck COTA weekend. After a good start in Round 1, the No. 42 Acura TLX-GT was hit and had to retire because of resulting suspension damage – damage that was not repairable for Round 2. Cunningham will drive the RealTime/Acura Motorsports/HPD Acura TLX-GT. Teammate Ryan Eversley, of Atlanta, GA, also encountered bad luck in Round 1 after contact resulted in suspension damage, but the team was able to fix the No. 43 RealTime/Acura Motorsports/HPD car. In Round 2 Eversley rocketed up from his starting position of 25th to finish 5th on the day.

Always Evolving (AE) has a GT Academy-NISMO Nissan GT-R GT3 race car entered for open wheel and GT star JD Davison. Davison, of St. Petersburg, FL, will pilot the No. 33 AE/ReplayXD/NISSAN NISMO GT-R GT3. He recorded a sixth and a 16th at COTA.

Michael Lewis, of Laguna Beach, CA, had a tremendous debut weekend in Pirelli World Challenge at COTA winning both GTA Rounds convincingly and leading the points chase in class with 144. Can the driver of the No. 41 EFFORT Racing/Curb-Agajanian Porsche 911 GT3R continue his hot streak at St. Petersburg? The statistics show that a Porsche has won four of the last nine races at St. Petersburg.

A pair of Ferrari drivers look to dethrone Lewis. Henrique Cisneros, of Miami, FL trails Lewis with 108 points after two 12th overall GT finishes at COTA. Cisneros will drive the No. 30 MOMO NGT Motorsport Ferrari 458. Martin Fuentes, of Mexico City, MX, will pilot the No. 07 Scuderia Corsa Hublot Ferrari 458 and he sits fourth in class.

Sofronas' GMG team has one car entered in GTA., with Brent Holden, of Newport Beach, CA piloting the No. 44 Audi R8 LMS Ultra.

Like Lewis in GTA, Colin Thompson, of Doylestown, PA, debuted in Pirelli World Challenge at COTA with back-to-back convincing wins and he will look to carry that momentum into the St. Petersburg weekend piloting the No. 11 Porsche of Bucks County/Penn Valley Constructors/Sherwin Williams Automotive Finishes/Austin Hatcher Foundation Kelly-Moss Motorsports Porsche 911 GT3 Cup. Thompson leads in the GT Cup drivers' standings with 303 points.

Michael Cooper, of Syosset, NY, in the No. 10 Blackdog Speedshop Chevrolet Camaro Z28, comes into the St. Petersburg weekend sitting in second place in the GTS Drivers' Championship with 212 points. Cooper recorded an impressive Round 2 win in rainy conditions rocketing up from ninth on the grid to take the lead by the end of lap 1 and never being challenged to take the win. Cooper's teammate and series veteran Tony Gaples will pilot the No. 11 Blackdog Speedshop Chevrolet Camaro Z28.

Jack Baldwin, of Marietta, GA, the back-to-back winner in 2013 at St. Petersburg, experienced mechanical issues at COTA with his No. 73 RESET-MD Porsche Cayman. If the team can get things sorted out with the car, look for Baldwin to be in the thick of things this weekend. Buz McCall, of Boca Raton, FL will again team with Baldwin as the pilot of the No. 72 RESET-MD GTSport Racing Porsche Cayman.

A Mustang driver that could figure prominently this coming weekend is Spencer Pumpelly, of Atlanta, GA piloting the No. 87 DWW Motorsports iTrackzone.com Ford Mustang Boss 302. Pumpelly has competed at the top levels of sportscar racing for over a decade, garnering multiple victories in various series, including two GT class wins at the Rolex 24 Hours at Daytona. Pumpelly makes his first start in the series since running a couple of GT races in 2009.

Mark Wilkins, of Toronto, ON, comes into the race weekend 8th in points. The pilot of the No. 38 Kinetic Motorsports PutOnTheBrakes.Org Kia Optima will be partnered with teammate Ben Clucas, of Northampton London. Clucas will pilot the No. 36 Kinetic Motorsports DonorsChoose.Org Kia Optima. Clucas finished second in Round 2 and comes into the weekend fourth in drivers' standings with 191 points.

TRG-AMR brings two Aston Martin Vantage GT4's to the GTS battle with Derek DeBoer and Max Riddle behind the wheels. Riddle, of Vancouver, BC takes over the 07 Orion/Royal Purple/LaSalle Solutions/PassTime USA car from Kris Wilson, who piloted the car at COTA. Wilson, a sportscar veteran, showed the 07 GT4 is a competitive car winning Round 1 and finished 9th in Round 2. DeBoer, of Ashland, OR, will pilot the No. 09 BlackRiderRacing/Lex Tempus/BRM Chronographes car.

Rounding out the GTS field is three-time champion Lou Gigliotti. He will drive the No. 28 LG Motorsports Aston Martin Vantage GT4.