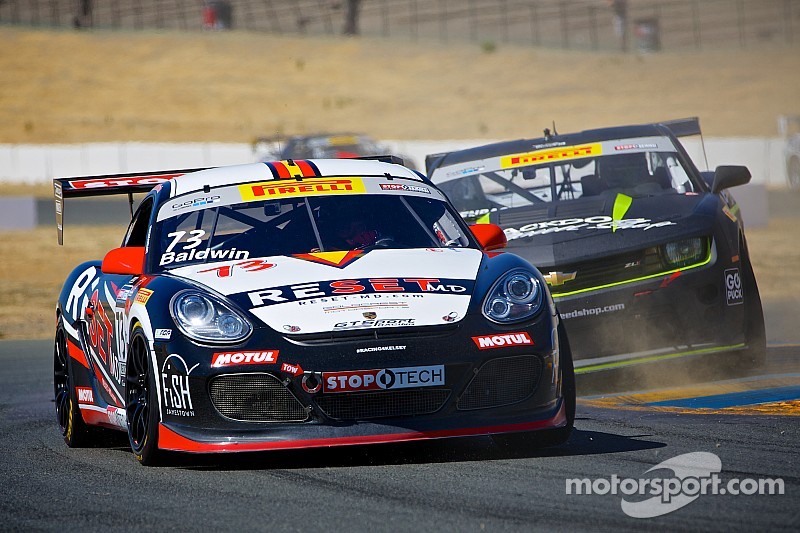 Round 14 takes place this aftenoon.

Mike Skeen (GT), Michael Mills (GT-A) and Jack Baldwin (GTS, in photo) took wins in Saturday's Round 13 of the Pirelli World Challenge season, the Cadillac Grand Prix of Sonoma, part of the GoPro Grand Prix of Sonoma weekend. Skeen and Baldwin led flag-to-flag in their classes, with Skeen securing his third win of the season (first since Round 8 at Road America) and Baldwin his second (Round 4, Barber). Meanwhile Mills won his fourth straight GT-A race, and fifth this year, in a recovery drive after a poor start and late race drama that took the class leader out of play.

The 50-minute race was barely able to get going with contact off of the standing start before start/finish. Peter Cunningham, of Milwaukee, Wis., in the No. 42 Acura/RealTime Racing Acura TLX-GT stalled off the line and was contacted by Santiago Creel, of Mexico City, Mexico, who had qualified seventh in GTS in the No. 06 Hotbook/Pal Zileri/Mexico/Under Armour/Loma Linda Aston Martin GT4.

That contact, plus another incident between GTS class contenders Dean Martin, of Westland, Mich., in the No. 50 Picture Cars East/Rehagen Racing Ford Mustang Boss 302S and Nic Jonsson, of Buford, Ga., in the No. 36 DonorsChoose.org Kia Optima, put the race under a full-course caution that lasted for nearly 18 minutes.

Once the race resumed on Lap 7, Skeen, of Charlotte, N.C. in the No. 2 Hawk Performance Audi R8 Ultra was able to lead away from the rest of the GT field for the rest of the 26-lap race. He took the win by 4.110 seconds at an average speed of 73.730 mph. "We had all the laps out front, but tons of traffic, and a very dirty track," Skeen said. "It was very tight. Cooperation with traffic is crucial. I couldn't let up as we had Ryan (Dalziel) and Butch (Leitzinger) behind pushing me. We closed up pretty good today and look for more tomorrow."

Skeen was consistently ahead of the field the rest of the day but the battle behind him was for second. Dalziel, of Winter Park, Fla., held onto P2 in the No. 31 EFFORT Racing Porsche GT3 R with Leitzinger, of State College, Pa., in the No. 08 Bentley/Breitling/Mobil 1 Bentley Continental GT3 and Andrew Palmer, of Chicago, in the No. 21 GMG Racing Audi R8 Ultra, giving chase. Dalziel got up to second courtesy of a stellar start, as he made it from sixth to second by the end of the first lap at the time the full course caution flew. That netted him the Invisible Glass Clean Pass of the Race award.

Leitzinger made it into podium contention on Lap 7 when he passed Anthony Lazzaro, of Atlanta, Ga., in the No. 61 R. Ferri Motorsports Ferrari 458 Italia GT3 entering Turn 4 in what was awarded the Cadillac CTS-V Move of the Race. Later that lap, Lazzaro lost control exiting the Carousel (Turn 6) and limped back to the pit lane.

While Leitzinger was consistently able to hassle Dalziel, he was never able to complete the pass for second. Still, he was able to bring home the first podium finish for Dyson Racing Team Bentley in Pirelli World Challenge competition.

"I just had a blast out there. It was so much fun, the Bentley was so good," Leitzinger said. "We're still working on starts but once we got rolling the car was mega. I had a lot of fun racing everyone. Everyone races hard but clean. It's been a really good learning curve for this program."

Palmer finished fourth with points leader Johnny O'Connell, of Flowery Branch, Ga., making the most of a day where the No. 3 Cadillac Racing Cadillac CTS-V.R was down on outright pace in fifth. O'Connell started 10th, but gained the most positions in GT during the race.

O'Connell leads Skeen by 11 points (1308 to 1297) as Skeen secured 11 of a possible 12 bonus points plus the 140 for winning. Overall, Skeen closed 71 points on O'Connell in Round 13. The only point Skeen didn't capture was fastest lap, which was achieved by Guy Smith, of Beverley, UK, in the No. 88 Bentley/Breitling/Mobil 1 Bentley Continental GT3.

Smith recovered from an opening lap spin to slice through the GTS field to an eventual ninth place finish overall and in GT. Also of note, Mike Hedlund, of Woodside, Calif., finished a season-best sixth in the No. 77 Scuderia Corsa Ferrari 458 Italia GT3, courtesy of a last lap pass on James Sofronas, of Villa Park, Calif., in the No. 14 Spyder/The Thermal Club Audi R8 Ultra.

In GT-A, Mills, of Angleton, Texas, in the No. 41 EFFORT Racing Porsche GT3 R, had a rough start to fall from second to eighth in the GT-A field. But thanks to patience, a solid car underneath him and a bit of luck, he was able to make it back for the win.

"I had the worst start in the world, and was rolling around in last place, wondering how I could do this," Mills said. "My car was so good, I had contact with someone that knocked the alignment out. Put my head down, made no mistakes, let the race come to me and the guys started falling like flies. Can't believe it, it's awesome. Can't thank EFFORT enough."

Baldwin takes Cayman to the win

GTS saw Baldwin, of Marietta, Ga., in the No. 73 RESET-MD Porsche Cayman S finish the deal after a weekend where he'd led the timesheets all weekend.

After surviving a close battle with Lawson Aschenbach, of Palm Beach Gardens, Fla., in the No. 1 Blackdog Speed Shop Chevrolet Camaro off the starting line, Baldwin was able to lead away cleanly the remainder of the race. He led flag-to-flag, set the fastest race lap, and held off Aschenbach by 1.956 seconds.

The win was emotional for Baldwin, who along with winning in front of his family and the rest of the GTSport Racing team, is also Racing4Kelsey. The team is running this season for Kelsey Flanigan, a 23-year-old battling brain cancer. Flanigan and her family are also in attendance this weekend.

"The last two years here have been pretty rough, and this year in particular has been pretty tough, but we never gave up despite the wrecks, gearboxes and everything else," Baldwin said. "For me, I wanted to seal the deal for these guys who have worked so hard all year. My wife's here, daughters are here, we raced for Kelsey today. So to do this at Sonoma, we got our monkey off our back and we might be back in the game here points-wise. You just never know."

Aschenbach finished second for his third podium finish in a row and fourth in the last five races. Joey Atterbury, of Rochester, N.Y., finished a season-best third in the No. 33 Capaldi Racing/Ford Racing Ford Mustang Boss 302S for his first podium finish of the year in Pirelli World Challenge.

GTS points leader Mark Wilkins, of Toronto, in the No. 38 PutOnTheBrakes.org Kia Optima enjoyed a trouble-free drive to fourth, while Alec Udell, of The Woodlands, Texas scored his fifth top-five finish in the last six races with a fifth place Saturday in the No. 17 Watson Racing/MDG Ford Mustang Boss 302S.

Of note in GTS, Tony Gaples, of Libertyville, Ill., took home the Sunoco Hard Charger award with a gain of eight positions from start to finish. Gaples ended seventh in the No. 11 Blackdog Speed Shop Chevrolet Camaro for his fifth straight top-10 finish. Brian Kleeman, of Baltimore, Md., took home the Optima Batteries Best Standing Start with a gain of eight positions in the No. 07 Nissan/DXD Clutches/Aeromotions Nissan 370Z. Kleeman ended 14th in GTS.

As mentioned above, O'Connell still leads Skeen in the GT driver points but only by 11, while Audi should move into the lead of the Manufacturer's Championship with the win and the top Cadillac finishing fifth.

In GTS, Wilkins should maintain a 100-plus point lead, with Aschenbach his new closest pursuer. Neither Jonsson nor Martin scored points; Baldwin will be in the race for third on the strength of his win. Kia will maintain its lead in the Manufacturer's Championship.