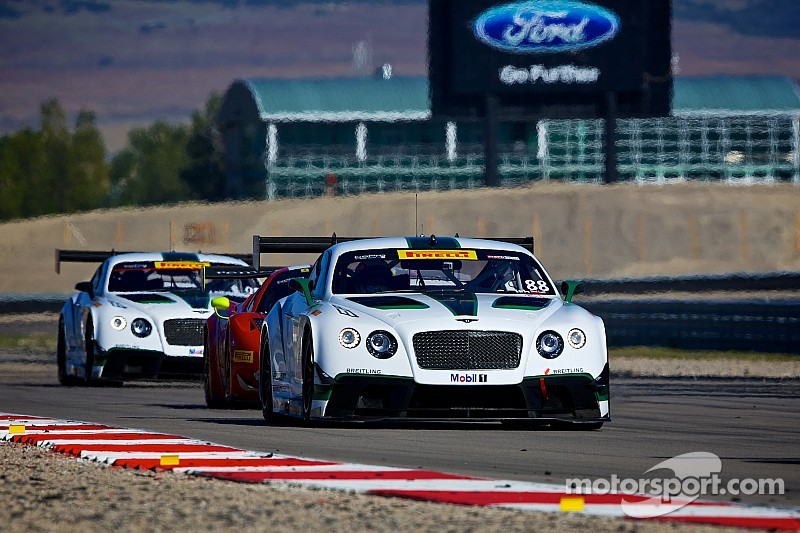 England’s Guy Smith (in photo) celebrated his 40th birthday in the best possible way on the opening day of the EnergySolutions Utah Grand Prix at Miller Motorsports Park, taking the first-ever victory in the Pirelli World Challenge GT class for the Bentley Continental GT3.

Smith qualified on pole and ran in second place in the early laps behind the No. 6 KPAX Racing McLaren 12C GT3 of Robert Thorne, following a crash-strewn standing start that saw championship contender Mike Skeen eliminated with a snapped axle on his No. 2 CRP Racing Audi R8 Ultra and both factory GTS-class Kia Optimas eliminated in the ensuing pile-up. Smith, driving for Dyson Racing, gained the lead when Thorne tangled with a slower lapped car on Lap 14 of the 24-lap, 50-minute race.

Mike Mills was the GTA class winner in his No. 41 EFFORT Racing Porsche 911 GT3R, coming home ninth overall in the 41-car field to claim his sixth win of the season. Marcelo Hahn was second in class and 11th overall in his No. 0 Reiter Engineering Lamborghini Gallardo FL2, with Alex Welch taking the final class podium spot in his No. 76 GMG Racing Audi R8 Ultra.

Nick Esayian captured his second-ever series win by taking the GTS class win in 24th overall in his No. 34 TRG-AMR Aston Martin GT4. Jack Baldwin was second in class in his No. 73 RESET Porsche Cayman S, with Esayian’s teammate Drew Regitz third in the No. 02 Aston Martin GT4. Salt Lake City’s Vesko Kozarov was 15th in in the GTS class and 38th overall in his No. 90 Skullcandy Nissan 370Z for his first series start in that car.

In the first of the weekend’s two Pirelli World Challenge Touring Car races on the 2.2-mile West Course, Adam Poland led start to finish to take the overall and TC class win in his No. 11 Mazda MX-5, posting a 7.278-second margin of victory over the No. 94 Nissan Altima Coupe of Steven Doherty. Michael Pettiford was third in his No. 41 Pontiac Solstice, with Doherty’s teammate Bryan Heitkotter and the Honda Civic Si of Karl Thomson completing the top five. The Touring Car A class winner was Nic Jonsson in the No. 38 Kia Forte Koup in ninth overall and the Touring Car B class winner was Brian Price in the No. 51 Honda Fit.

Four of the series six championships still remain up for grabs on Saturday, as the Pirelli World Challenge will conclude its 2014 season.