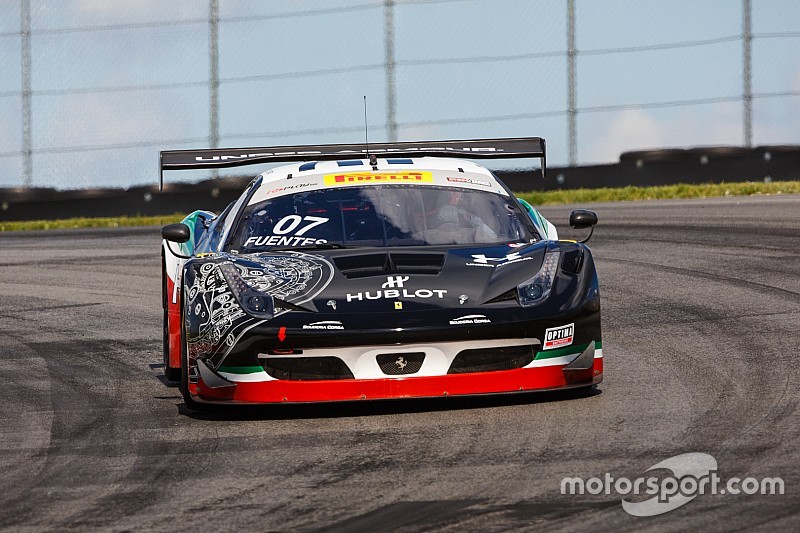 Los Angeles, Calif. - Scuderia Corsa's success in the team's first Pirelli World Challenge season continued at this weekend's races at Sonoma Raceway in Sonoma, California. Martin Fuentes steered the no. 07 Scuderia Corsa / HUBLOT Ferrari 458 Italia to his sixth podium finish of the season in Sunday's race when he took the checkered flag in third position in the GT-A class.

Fuentes's run to the podium strengthened his third place in the championship with only one race remaining in the Pirelli World Challenge season. The run to third position also represented a strong turnaround for Fuentes, who finished Saturday's race in eighth position after an incident while he was leading.

"It was a very complicated weekend, full of ups and downs," said Fuentes. "We had a very good qualifying and we were leading race one, but then due to an incident we had to serve a penalty and that dropped me well down the order. But we gained some spots and then we finished in eighth place. But on Sunday we started with a different mentality, and we were able to pull off that third place. It's disappointing that we took ourselves out of yesterday's race, but we are happy with today's result and thanks to the Scuderia Corsa team which made this possible."

Disappointment in the GT class

The weekend at Sonoma Raceway would prove to be challenging for Duncan Ende in the no. 64 Scuderia Corsa / Lino'spresso Ferrari 458 Italia. Contending for a top-10 finish in the GT class during Saturday's race, Ende was the victim of contact which dropped him well down the order. On Sunday, the trend would continue as he was hit by another car during the start, causing enough damage to put him out of the race.

"I had such high hopes for the weekend, but it ended up being really disappointing," said Ende. "The Scuderia Corsa Ferrari 458 Italia was a joy to drive at Sonoma. We had a really great battle going in Saturday's race, but another driver made contact with me and I spun. And then, we had contact during the start of Sunday's race and that put us out, which is a real shame for all of the Scuderia Corsa guys. With only one race left, we'll be really focused on getting the absolute most out of our race at Laguna Seca."

Home race in the GT-A class

Rejoining the team for his home race was Mike Hedlund, who lives near the Sonoma Raceway circuit. In his first race since Long Beach, Hedlund drove the no. 65 Scuderia Corsa Ferrari 458 Italia to fourth position in the GT-A class in Saturday's race. However, he did not compete in Sunday's race due to a minor medical issue.

The races from Sonoma Raceway will be broadcast on CBS Sports Network on Sunday, September 6 at 2:00 PM ET. The final race of the Pirelli World Challenge season will be September 11-13 at Laguna Seca in Monterey, Calif., located a short distance from Ferrari Silicon Valley.