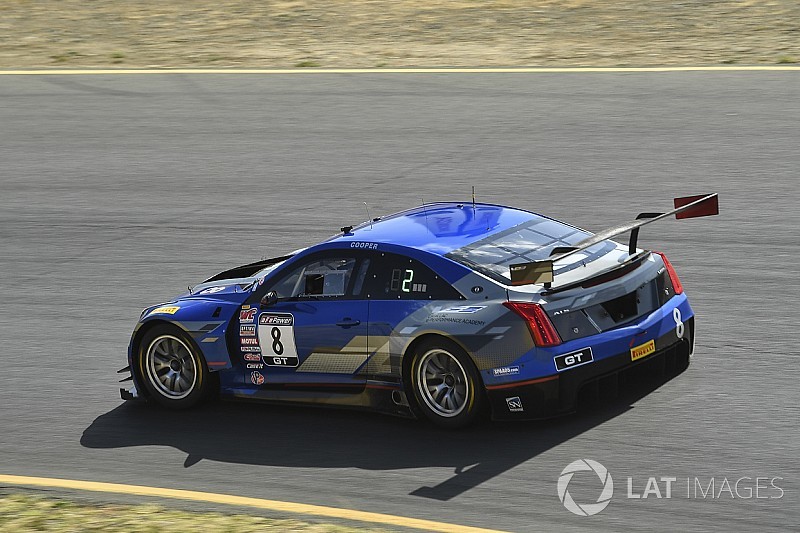 Michael Cooper was unmatchable and uncatchable in the Cadillac ATS-V.R in the first of Sonoma Raceway's Pirelli World Challenge GT races, but behind there was top quality action from the series' leading lights.

From the rolling start, the polesitting TR3 Ferrari 488 of Daniel Mancinelli appeared to have a clear edge but Cooper’s Cadillac rocketed up the hill around the outside to grab the inside for Turn 2 and by the end of the lap he was one second ahead.

Kaffer passed Schein for seventh on Lap 6, while the gap between Cooper and Mancinelli fluctuated between 1.2 and 1.7sec. But the closest battle in the early stages was for third, Dalziel, Long and Parente.

At the end of Lap 7, Eversley brought his NSX into the pits, and the car was jacked up but to no avail.

Parente got around Long on Lap 9 and set about trying to close the 1.3sec gap on Dalziel, while Kaffer demoted Fogarty’s Porsche on Lap 10.

Mancinelli had fallen 2.3sec behind Cooper with half an hour to go, and that had allowed Dalziel and Parente to close right up. Some 2.5sec behind this trio, Long had to work hard to keep Kaffer’s Audi behind.

Parente went around the outside of Dalziel at the Carousel, claiming third before braking for the Turn 7 hairpin. Next time by, it was Long who was passing the CRP Mercedes at Turn 4, and Kaffer followed him through at the hairpin.

The #9 K-PAX McLaren wasted no time in closing onto the tail of Mancinelli’s Ferrari 488 but spent a long time stalking him. On Lap 21, he made a major divebomb move down the inside at Turn 7, but pushed out wide, allowing the Ferrari back ahead, and Long and Kaffer to close right up. Cooper, untroubled, was five seconds ahead in the Caddy.

On Lap 22, at the final hairpin, Parente again looked like he’d overcooked his inside dive but widening the arc allowed him to carry more speed and he just about had the inside for climbing up the hill to Turn 3. Long and Kaffer quickly pushed the yellow Ferrari to fifth, at Turns 7 and 10 respectively.

Rather than focus on catching Parente, over the closing 10 minutes of the race, Long had to eye his mirrors, as Kaffer was filling them with Audi R8. However, there was enough life on the Porsche’s Pirellis for Long to edge away again.

Cooper paid out the line over the final couple of laps, but still won by 2.8sec, with Parente 1.7sec ahead of Long. Kaffer eventually finished seven seconds clear of Mancinelli’s Ferrari, while Dalziel held on for sixth ahead of Fogarty.

Schein was top Amateur in the second Wright Motorsports car, eighth overall, and 21sec clear of James Sofronas in a similar Porsche. The pair were split by Kox’s Acura.