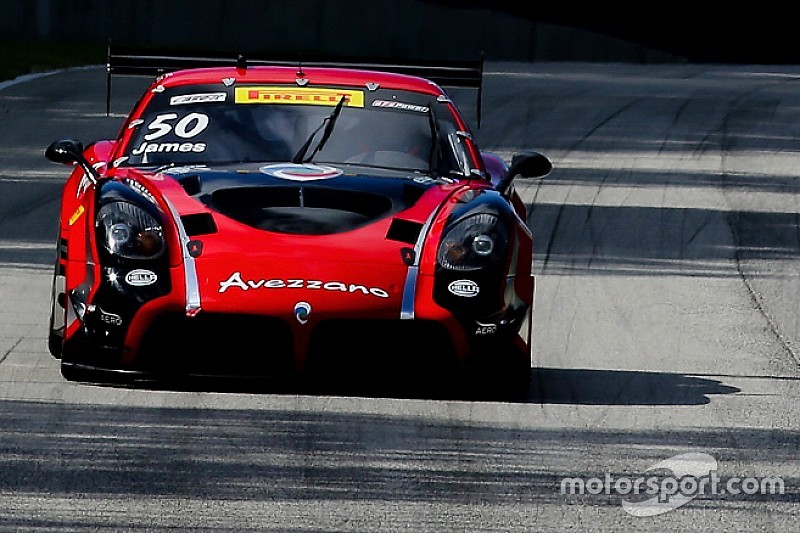 The polesitting Panoz Avezzano of James held onto the lead comfortably at the start from Barkey’s XBow, but Lawson Aschenbach’s Black Dog Speedshop Chevrolet Camaro grabbed third ahead of Rodrigo Baptista’s Flying Lizard Motorsports Porsche Cayman which soon had Parker Chase’s Ginetta G55 crawling all over it. These two initially ran well ahead of lead Amateur, Derek DeBoer’s Aston Martin Vantage, while Nate Stacy’s Cayman had also gotten ahead of Drew Stavely’s Ginetta to take seventh.

Chase grabbed fourth from Baptista on Lap 4, by which time James had a three second lead over Barkey, who just couldn’t shake Aschenbach’s heavy Chevy. However, Aschenbach by Lap 6 was having to also watch his mirrors as Chase’s nimble Ginetta was darting around in his mirrors. A lap later, the Camaro was having to be placed defensively into Turn 9.

A slight curb-climbing error by Baptista exiting Turn 7 on Lap 8 saw DeBoer able to get the power down better in his Aston Martin, and outpower the Porsche and grab fifth.

Finally on Lap 10, Chase grabbed third from Aschenbach under braking for Turn 7. He now had 3.8sec to make up to catch Barkey’s Xbow, with James’ Panoz a similar distance ahead in the lead. But despite occasional surges, neither Barkey nor Chase could make any significant inroads on the lead of the car in front.

DeBoer’s superior braking in the Aston Martin allowed him to draw alongside Aschenbach as they entered Turn 11 on Lap 13, the cars stayed level past the start/finish line and while DeBoer was on the outside for Turn 1, he was able to take a sweeping line across the nose of the Camaro and lead him into Turn 2. That settled fourth place.

On Lap 26, after several laps tracking Aschenbach, Baptista passed him on the exit of Turn 7 after the Camaro had gotten sideways and lost momentum on the downhill Carousel. The Porsche rapidly pulled away to claim fifth, albeit seven seconds behind DeBoer who himself was 10sec from third.

Stacy had a lonely race, despite closing on Aschenbach at the end, since he had a 25sec lead over Stavely who in turn was 15sec ahead of Alex Lloyd driving another Porsche Cayman.