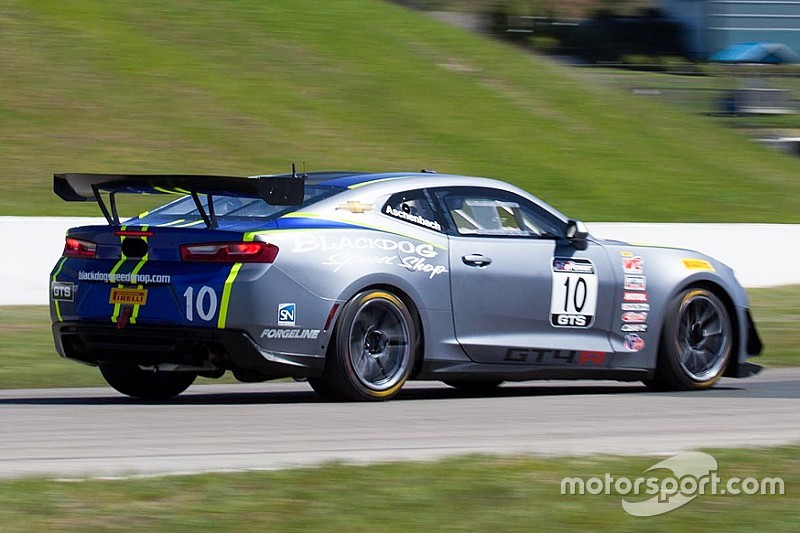 By Lap 4, GTS champ Aschenbach was having to spend less time focusing on the Panoz ahead and more on the KTM behind him. However, Barkey’s focus was also being diverted by Chase’s Ginetta moving around in his mirrors. A failed attempt on the Camaro at Turn 4 on Lap 8 left Barkey vulnerable to Chase exiting Turn 7 hairpin, but the order remained the same.

A yellow bunched the field on Lap 9, caused when the wayward Ginetta of Gannett shoved the SIN R1 of Michaelian into the wall exiting Turn 11.

The restart saw Aschenbach growl past the Panoz up the hill to shove the Camaro into the lead and close him out on the apex. Then at Turn 4, Chase collided with Barkey sending them spinning off the track, elevating the FLM Porsches of Baptista and Stacy into third and fourth, Stavely into fifth, and Tony Gaples in the second Blackdog Camaro into sixth. Chase and Barkey had rejoined 10th and 13th respectively, but Barkey then pitted.

That collision was small compared with what followed. Battling over sixth going through the Esses that follow the Turn 7 hairpin, Gaples and DeBoer were running side by side, but the inevitable collision saw the Camaro spin across the nose of the Aston and into the wall on the right, where it got airborne and bounced across into the path of the following pack who thankfully steered clear. Gaples was able to emerge unassisted.

Such was the debris field, the red and checkers flew simultaneously, so the other Camaro went to Victory Lane, Aschenbach beating James, Baptista, Stacy and Stavely. Gaples was classified sixth, ahead of DeBoer, with Chase recovering from his incident to grab eighth.