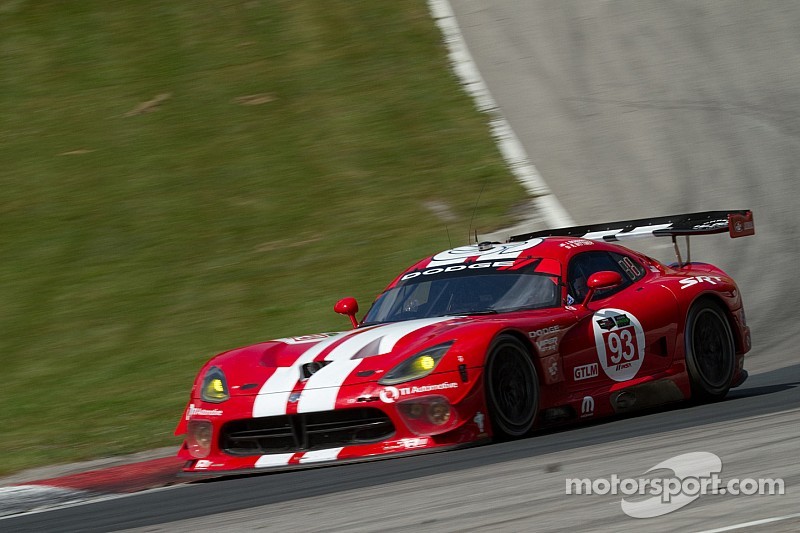 Wittmer, a native of Montreal, will pilot an all-new No. 92 Dodge Viper SRT GT3-R prepared by Riley Technologies in the ninth and 10th rounds of the sports car championship on the downtown Toronto street circuit in an effort to promote the SRT Motorsports' customer Viper GT3-R racing program.

"It's going to be a lot of fun to have Kuno step into the Pirelli World Challenge and test his skills in the Viper GT3-R against the top class in the series," said Ralph Gilles, CEO of SRT Motorsports, Chrysler Group LLC. "This is a test Viper that Riley Technologies prepared and we see this race as an opportunity to showcase our customer program. We've had success in the series with Dan Knox taking the Viper to the winner's circle during the Detroit race weekend and we want to continue building momentum with our Viper GT3-R program."

Knox, who competes full-time in the World Challenge in the No. 80 Dodge Viper SRT GT3-R, ranks third in the GT-A class standings and claimed the Viper GT3-R's first series victory in a May race on Detroit's Belle Isle circuit.

Wittmer will compete in the World Challenge's GT class in Toronto one week after racing at nearby Canadian Tire Motorsports Park (Mosport) for an IMSA Tudor United SportsCar Championship event in the No. 93 Dodge Viper SRT GTS-R, his full-time ride, on July 13. The native of Canada has tallied three podium finishes in six starts in the IMSA TUDOR series in 2014 and won the pole position for the Mosport race.

"I believe that the Viper GT3-R is a benchmark car across the world," said Wittmer. "The Viper has a lot of potential and this is a great opportunity to showcase the car in the GT class."

Wittmer previously competed in the World Challenge from 2008 to 2010 and tallied six victories in the series, including two Viper wins in Salt Lake City and Long Beach, Calif.

"I spent a lot of time in the World Challenge as a race engineer and for me it's like going back home," said Bejnarowicz. "That's where Kuno and I met and he had a lot of talent and potential. We ended up getting paired up, cut our teeth together and we've been together since. It will be like the old days - a lot of fun and we're going to try to put the Viper up front."

The Toronto race weekend is the only scheduled appearance for Wittmer and the No. 92 Viper GT3-R entry in the World Challenge. Knox will continue to run the full series schedule in pursuit of the GT-A class championship for Lone Star Racing and the Viper GT3-R racing program.

"Since his first race with us in 2006, we have enjoyed watching Kuno race. We look forward to seeing him racing on the Toronto street course," said Scott Bove, president and CEO for Pirelli World Challenge/ WC Vision.

Are you excited to enter the Toronto doubleheader?

"It's definitely a great step for the Viper program. I think the Pirelli World Challenge has evolved a lot over the past four or five years. The last time I raced in it was 2010 and it was already very competitive. Seeing how the championship has grown, it's more competitive in all the right ways and it will be fun."

Is it realistic to think you can win in your first appearance in the series since 2010?

"We can't forget that this is a one-off appearance on a street course and we don't get much track time. It's tough. There are half hour sessions and if you get a red flag from another class, you can lose a lot of track time. It's very vital that we get all our laps in as quick as we can, get the right setup right away and it's going to be very, very important that everything goes as perfectly as possible. Luckily, it's two races and not just one race - it's a doubleheader, so we can afford to play around a little bit. Ideally, we would like to win. But let's be realistic, get a solid result and showcase what this car can do."

Is the purpose of this entry to showcase the Dodge Viper SRT GT3-R program?

"That's exactly the purpose - to showcase this Viper GT3-R. The thought is, 'Hey, there's a Viper here that's being built by Riley Technologies, so let's show what it can do.' This Viper has been on the market for sale to race teams and drivers for less than a year and we need to start showcasing that this car is a very competitive car against world class manufacturers and talent."

Dyson Racing gets ready for Toronto