O'Connell (Flowery Branch, Ga.) was able to race to some Long Beach redemption this afternoon in southern Calif. Last year he was winning the event while nursing his CTS.V.R around the 1.9 mile 11 turn closed street course with a three inch piece of a competitors brake rotor lodged in the radiator. Just five turns from the checkered flag he coasted to a stop. Today O'Connell was able to get a great start and head the field the entire race distance of 31 laps. He had to soldier through one restart, following a first lap caution, but was pressed only by teammate Pilgrim (Boca Raton, Fla.) who finished second. 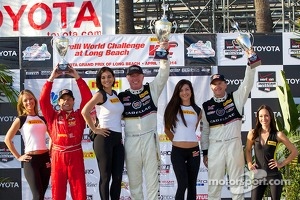 "I got a pretty good start," O'Connell said. "Andy may have gotten a little better launch than I did, but there was no way I wasn't going into Turn One deep. The first couple laps were very challenging. The car was really sliding around after the restart, then the Pirelli tires came in and the car really came to me. I got some really good breaks with traffic and was never really held up. I know Anthony Lazzaro was chewing on Andy, so I had to keep pushing. I think Andy I were really close I just had the track position. Getting so close last year I was super motivated to get the win today. It was nice to get the victory for the team and all of the Cadillac fans that came out this weekend."

"I got a really good start," Pilgrim said. "Johnny was on the inside, so I was happy to slot in behind him into Turn One. Our plan was to work hard at the beginning of the race as we thought it would get slippery towards the end with our heavy car. We both were sliding at the end. Traffic worked in our favor. Anthony got hurt twice toward the end of the race with slower cars, so that helped. I had a good car, it was going away at the end, but that is to be expected. A good day for Cadillac."

The win will have Pilgrim as GT points leader heading into the next round at Barber Motorsports Park.

The race from Long Beach will be televised on NBC Sports, Sunday, April 20 at 5:30 p.m. with a re-air Friday, April 25 at 1 a.m. The Pirelli World Challenge Series will travel to Barber Motorsports Park in Birmingham, Ala. for the first time in series for a double race weekend April 25 - April 27.