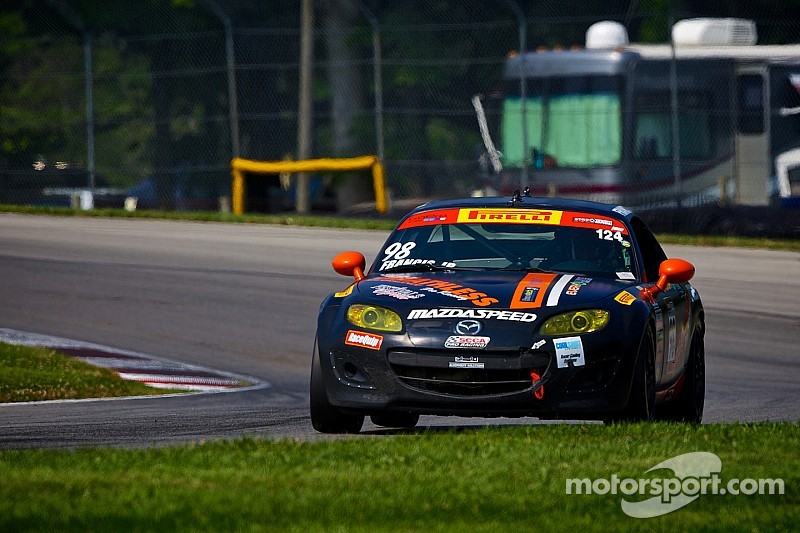 A pair of first-time winners on the podium.

Karl Thomson (Touring Car) and Johan Schwartz (Touring Car B-Spec) captured their first wins of the season, both in Hondas, with Ernie Francis Jr. (Touring Car A, in photo) scoring his second win of the year in a Mazda.

Of note, both Schwartz and third place finisher in TCB Nathan Stacy were found out of compliance in a post race technical inspection and penalized 141 and 99 championship points respectively.

Action was intense between three of the four TC class cars for most of the caution-free, 24-lap, 40-minute race.

Ray Mason, of Blacklick, Ohio, started from pole in the No. 71 Grand Alarms Honda Civic Si and led the opening three laps after a great start, while his Compass360 Racing teammate and team principal Thomson dropped back into the TCA field.

Mason held the lead for three laps before Fred Emich, of Denver, Col. in the No. 30 Emich Volkswagen Volkswagen Jetta GTI, came through on Lap 4. Emich held the lead for seven laps through Lap 10 before Thomson, of Toronto, began closing the gap back to the VW in his No. 72 CTF.org/Touge Tuning/Racing4Research Honda Civic Si.

Thomson made it through for the lead on Emich to the inside at Turn 12 (the first turn on the Brainerd short course), in a move that netted him both the Invisible Glass Clean Pass of the Race and StopTech Brake Late, Finish First awards. A lap later Mason also got past for second, where he also stayed the rest of the race.

Thomson was able to lead the field from there en route to the win by a margin of victory of 1.681 seconds. The win is his first of the season and his career driving, and the team's ninth overall, to go along with the eight achieved by TC points leader Michael DiMeo, of Toronto.

"All weekend long we've been having a bit of a notchy gear box," said Thomson. "I had a good start and I went to go to second and it just wouldn't go, so I had to go to third. Fortunately the run into the left hander off of the start isn't really that long. I lost a couple of places. A big shout out to the Children's Tumor Foundation folks and all the kids dealing with Neurofibromatosis."

"We have been working on the Civic's brakes," added Thomson on the pass for the win. "The StopTech brakes really help us out. It took me two tries to get the pass done cleanly on Emich. The first time I went in I didn't have enough grip to make the corner and went off the outside. Then the next lap through it all worked out well and I made a nice clean pass."

In TCA, Francis Jr., of Dania, Fla., in the No. 98 Breathless Performance Mazda MX-5, started second but quickly emerged the leader after the start to take home the Optima Batteries Best Standing Start of the race. He led flag-to-flag and won by 26.93 seconds. The win is Francis Jr.'s ninth in his Pirelli World Challenge career.

Shea Holbrook, of Groveland, Fla., in the No. 67 TRUECar/Lucas Oil/Radium Honda Civic Si took a crucial second place and closed the points gap to Jason Wolfe, of Mt. Vernon, Ohio, in the No. 36 Wolfe Trucking Kia Forte Koup, who finished third. She entered the weekend 33 points behind Wolfe (1141-1108), but gained seven bonus points for the pole position. With second place and Wolfe third, unofficially, she now sits only 11 points behind heading into Sunday's Race 12 (Wolfe 1236, Holbrook 1225).

Perhaps the most exciting racing of the afternoon came in TCB, where any of four drivers had a legitimate win chance and swapped the top four positions between them.

Schwartz, of Denmark, began from pole in the No. 12 Promatex/ADA/Animas American Honda Honda Fit and mostly fought 14-year-old Stacy, of Owasso, Okla., in the No. 14 MDG/Ford Racing Ford Fiesta for the overall lead.

Behind them, Paul Holton, of Tallahassee, Fla., in the No. 65 Radium/TRUECar/Lucas Oil Honda Fit and Glenn Nixon, of Mission, B.C., in the No. 58 Racing.ca/LaptopScreen.com/ Nixon Prosports Mini Cooper had a great scrap for third.

At various points on the circuit, Stacy got ahead of Schwartz, and vice versa. On Lap 19, Schwartz made it past Stacy for the lead in what was awarded the Cadillac CTS-V Move of the Race.

"I think Nate's front tires were giving up a little bit so I was able to catch up. I wasn't going to charge as hard at around 15 minutes left in the race," said Schwartz. "Then I started pushing a little bit harder and got up to him. We started to catch a bit of traffic. I tried a few times going both inside and outside around turn 3. Then all of a sudden a TC car came up and it kinda opened the window and I think Nate thought I wasn't going to make a pass. He moved out for the ideal line and I just put that Honda Fit in. Stuck it on the inside and we never touched."

Stacy stumbled in the final two laps when in traffic, and Nixon was able to make it past for second as well. The second-to-last lap saw a dead heat at the line with Nixon leading Schwartz by inches at the start/finish line, but Schwartz was able to hold him off through Turn 1.

Schwartz cleared the traffic better than his three counterparts and the Dane was able to break through for his elusive first Pirelli World Challenge win in his 11th start, by a margin of 0.977 of a second. It's also the Garrett Racing/Drive4Diabetes' second consecutive win after Chase Pelletier, of Brampton, Ontario, won Round 10 at Mid-Ohio.

"We had a good start from pole position. I knew it wasn't going to be easy though," said Schwartz. "The car ran awesome." Nixon came home second for his fourth podium in five starts this season.

Holton finished fourth ahead of Tyler Palmer, of San Diego, Calif., in the No. 37 MINI USA/Mobil 1/Flying L Racing/ThePainter'sFriend.com/ Discount Tire Mini Cooper, who in fifth continued his streak of top-five finishes in each of his 18 career starts.

In eighth place was TCB points leader Brian Price, of Middletown,Va., in the No. 51 Carsquare.com/Unlimited Racing/RP Performance Honda Fit, after starting second.

Also of note, with a gain of five positions from 12th to seventh in TCB, Jason Fichter, of Jupiter, Fla. took home the Sunoco Hard Charger award in the No. 7 Surf Fire & Security Mini Cooper. Breathless Performance teammate Chris Holter, of Rochester, Minn. in the No. 9 American Brain Tumor Association/GoPuck/Fuel Clothing Mazda 2, finished 10th in his first start in the series.

DiMeo retains the TC lead even though he will not be here this weekend. Wolfe's lead on Holbrook is down to 11. Price continues to hold a more than 100-point lead in TCB over Palmer, Stacy and Holton.

Round 12 of the season occurs Sunday at 12:55 p.m. CT and local time, with live streaming available on world-challengetv.com. A morning warmup and practice will occur at 9:50 a.m. CT.