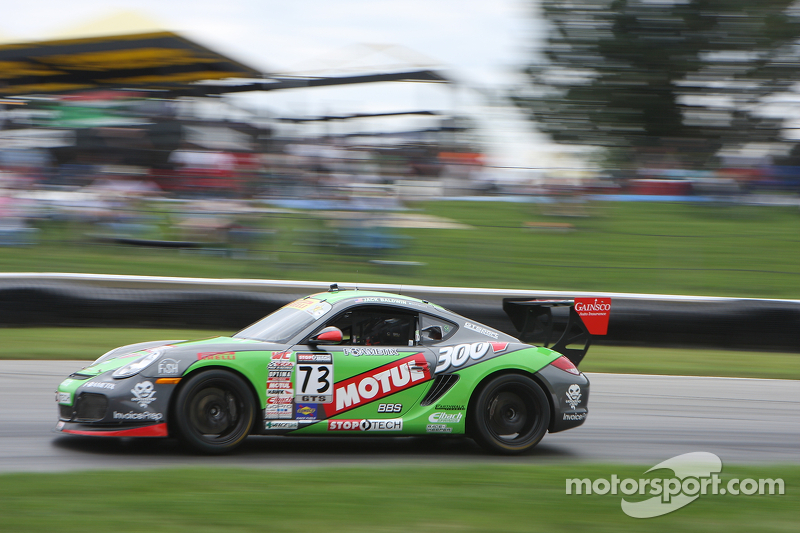 Pirelli World Challenge is in action this weekend in Napa Valley, California with Jack Baldwin leading in the GTS Drivers' Championship

Sonoma, CA – The Pirelli World Challenge heads to Sonoma Raceway this weekend for the Cadillac Grand Prix of Sonoma. The west coast swing is the second-to-last race weekend of the 2013 season for the near 70 cars entered across GT, GTS, Touring Car and Touring Car B-Spec classes.

Round 13 for GT and GTS and Rounds 11 and 12 for TC and TCB will have substantial championship implications and three of the four class leads have the potential to change hands this weekend. In two classes, GT and TCB, the points gaps are just 13 and two, respectively, between the first and second place drivers!

Sonoma marks Pirelli World Challenge's second trip to California this year, as GT and GTS also raced at Long Beach in April. That combined race was drama-filled in both classes; and at Sonoma, a track where many series teams and drivers have prior experience, expect more of the same this weekend.

Mid-Ohio shook up the title chase in Pirelli World Challenge GT. Two pivotal third-place finishes moved James Sofronas, of Villa Park, CA, back within 13 points of the class lead (1278-1265) in the No. 14 GMG/Swisher Racing/Mobil 1 Audi R8 LMS. Sofronas was able to capitalize on points leader Johnny O'Connell's earlier demise this season at Long Beach, as he secured his second of three wins this season, and he will surely pounce again if given the opportunity at Sonoma. Sofronas didn't race at Sonoma a year ago but will no doubt be keen to keep pushing and regain the title lead this weekend.

O'Connell, of Flowery Branch, Ga. in the No. 3 Cadillac Racing Cadillac CTS-V.R, still leads heading into the weekend. But it's a tenuous gap as crash damage to his radiator took him out of Round 12 at Mid-Ohio, where he finished 11th. Cadillac is back to its usual two-car lineup this weekend with Andy Pilgrim of Boca Raton, FL in the No. 8 Cadillac Racing CTS-V.R providing support, and looking to return to the podium after fourth and fifth place finishes in Mid-Ohio.

The hot team entering Sonoma is K-PAX Racing, which will have additional support and livery signage from Alex's Lemonade Stand for its pair of Volvo S60s this weekend. Alex Figge, of Denver, CO, shook the proverbial monkey off his back with a weekend sweep at Mid-Ohio in the No. 9 K-PAX Racing Volvo S60, and to boot, he's the defending GT class pole and race winner at Sonoma. He could be the spoiler this weekend. Teammate Randy Pobst, of Gainesville, GA in the No. 6 K-PAX Racing Volvo S60 is closing on Pilgrim for third in points; he enters just 14 points back (1139-1125). Figge now sits fifth in points after his Mid-Ohio double.

The other race winner thus far in 2013 has been Mike Skeen, of Charlotte, NC, in the No. 2 Hawk Performance Chevrolet Corvette, who took the checkered flag at Round 8 in Lime Rock. Michael Cooper and David Roberts took the green flag in the No. 12 Hawk Performance Nissan GT-R at Mid-Ohio and Tim Bell, of Los Altos, CA, is listed back in that car this weekend.

Skeen will try to hold off Duncan Ende, of Los Angeles, in the No. 24 STANDD.org/Merchant Services Audi R8 LMS for sixth place in points. Ende is coming off a class win at Road America in another series a couple weeks ago, and he'll try to keep momentum on his side as he seeks his elusive first Pirelli World Challenge podium of the season. Bill Ziegler, in the No. 95 Swisher Racing/GMG Audi R8 LMS, rounds out GMG's three-car lineup for the weekend alongside Sofronas and Ende.

Jason Daskalos, of Albuquerque, NM in the No. 47 Vintage 423 Restaurant Dodge Viper Comp Coupe, returns to the series making his first GT start of the season. Daskalos has two career GT wins in Pirelli World Challenge. Elton Julian, of Palm Beach Gardens, FL in the No. 80 DragonSpeed, LLC Audi R8 LMS Ultra also makes his first start of 2013. The rest of the 13-car GT class field is expected to include Craig Stanton, of Long Beach, CA in the No. 85 Racing for our Heroes Porsche 911 GT3 Cup, and Fred Roberts, of Toronto, in the No. 89 Direct Energy Home Services SRT Dodge Viper Comp Coupe.

Pirelli World Challenge GTS: Contenders take points off each other while chasing Baldwin

Jack Baldwin, of Marietta, GA, in the No. 73 Motul/StopTech/Foametix Porsche Cayman S for GTSport Racing with Goldcrest has set the target for consistency this year in Pirelli World Challenge GTS and his competitors have been chasing since St. Petersburg to match it. Baldwin won the opening two rounds at St. Petersburg, and with three wins and 10 podium finishes from 12 starts this season, Baldwin still leads the championship by 87 points over second place and 105 over third (1261-1174-1156).

His two closest challengers, Mark Wilkins and Lawson Aschenbach, split the last race weekend at Mid-Ohio as Wilkins won Round 11 Saturday, and Aschenbach Round 12 on Sunday. Wilkins, of Toronto, ranks second in points in the No. 38 B.R.A.K.E.S. Kia Optima turbo while Aschenbach, of Jupiter, FL, is third in the No. 10 Blackdog Speed Shop Chevrolet Camaro. Wilkins' win was his second, and Aschenbach's his class-leading fifth, of the 2013 season. The two will need a podium result and for Baldwin to have some sort of problem to reduce the deficit.

Other position battles remain in the rest of the GTS field and the battle for fourth is a good one between Andy Lee and Peter Cunningham (Lee 997, Cunningham 922). Lee, of Colorado Springs, CO, in the No. 20 Best IT/Bondurant/Crown Seven Chevrolet Camaro and Cunningham, of Milwaukee, WI in the No. 42 Acura/HPD/RealTime Acura TSX finished 1-2 in GTS at Sonoma a year ago and look for an encore in 2013. Cunningham had an excellent Mid-Ohio weekend with a pair of runner-up finishes, his first podiums since three straight to open 2013.

Teammates of the above five drivers listed in numerical order are Tony Gaples of Libertyville, IL in the No. 11 Blackdog Speed Shop Chevrolet Camaro, Harry Curtin of Buffalo, NY in the No. 29 Best IT Racing Chevrolet Camaro, Nick Esayian, of San Diego, CA, in the No. 34 Acura/HPD/RealTime/Red Line Oil Acura TSX, Nic Jonsson, of Jonkoping, Sweden in the No. 36 DonorsChoice.org Kia Optima turbo and Buz McCall of Boca Raton, FL, in the No. 72 Motul/StopTech/Foametix Porsche Cayman S. Although Curtin was listed as an entrant at Mid-Ohio, he did not compete there.

Jonsson enters the Sonoma weekend 10th in points but has been GTS' fastest driver of late. He took both poles at Mid-Ohio and fastest race laps in two of the last three events. He has yet to score a podium but has been particularly on form of late for Kinetic Motorsports.

A pair of one-car entries round out the 25-car GTS field: Robert Stout, of Brownsburg, Ind. is in the No. 86 Scion/TRD/Lucas Oil/E3 Spark Plug Scion FR-S and Colin Cohen, of Southlake, Texas, is in the No. 03 Milltek Exhaust/STaSIS/REVO Audi TT RS.

Touring Car in 2013 has witnessed two separate streaks. Karl Thomson's Compass360 Racing Honda team won the first six races, and defending TC class champion Michael Cooper, of Syosset, NY has won the last four in the No. 1 Atlanta Motorsports Group Mazda Mazdaspeed 3. Cooper's problem is that because he missed the opening tripleheader weekend at Circuit of the Americas in May, he's more than 400 points back of the class points leader.

Ryan Winchester, of Mason City, Iowa in the No. 72 C360R/Ligion Industries/HPD Honda Civic Si, can't clinch the TC class title this weekend but he can put it mostly out of reach. He enters the weekend with a 231-point lead (1164-933) over teammate Brett Sandberg and with three wins and nine podium finishes from 10 starts.

The Compass team is back to just three cars this weekend after running a fourth in Toronto and Mid-Ohio. Winchester's teammates Sandberg, of Allendale, N.J. in the No. 70 C360R/GearTie.com/HPD Honda Civic Si and Remo Ruscitti, Vancouver, Canada, ranks third in points in the No. 71 C360R/Ultimate Racing/HPD Honda Civic Si, are each seeking a win in their battle for second in the points. Sandberg currently holds a 59-point gap to Ruscitti (933-874); a win would be Sandberg's fourth, and Ruscitti's first, in 2013.

There's two more Civics in the field with Jon Miller, of Orlando, FL, in the 68 Titan Motorsports/Loudbasstard Honda Civic Si for Shea Racing and Sarah Cattaneo, of Scottsdale, AZ, in the No. 43 IDoBorrow.com Honda Civic Si for CRG, LLC. Miller's been exciting to watch but unlucky throughout 2013 while Cattaneo resumed her 2013 season at Mid-Ohio with two top-10 results.

Tristan Herbert, of Reston, VA, carried Volkswagen's flag nicely with a pair of fastest race laps and runner-up finishes at Mid-Ohio in the No. 33 Revo/Germanautoparts/Brimtek VW Jetta GLI. A second VW is driven by Fred Emich of Denver, CO, the No. 30 Emich VW/HPA Motorsports Volkswagen Jetta. Brad Adams, who'll also be racing in GTS, is slated to make his first TC class start of the year in the No. 96 Voodoo/DatDog/Yo MTV Raps! Mazda MX-5. Rounding out the Touring Car field are Clark Toppe, of The Woodlands, Texas, in the No. 10 Kinetic Motorsports Kia Forte Koup, back for the first time since Lime Rock, and Ken Dobson, of Sonoma, CA, in the No. 07 WilliamsAutosport/King Elec/Atlanta Motorsport Group Fiat Abarth.

Francis Jr., of Davie, FL in the 98 Festivals of Speed/Breathless Performance Mazda 2 now has five wins with Davis, of Dallas, Texas securing his third in the No. 37 MINI of Charleston Racing MINI Cooper. Whoever emerges ahead between these two in Sonoma will have the upper hand going into the final weekend of the year at Houston.

Still fully in with a shot as well is Joel Lipperini, of Pittston, PA, in the No. 81 RaceLabz Honda Fit, currently third in points with 948. Third and fourth in the two Mid-Ohio races were respectable finishes, although Lipperini hit poor luck in both and will be extra motivated to win his third race of 2013 this weekend.

Ernie Francis Sr., in the No. 2 Hydraulic Jeans Mazda 2 and the pair of Shea Racing-entered Honda Fits, P.J. Groenke and Shea Holbrook, sit fourth through sixth in the standings. Groenke, of Toronto, in the No. 66 MulliganGold/Tundra/Verax.ca Honda Fit and Holbrook, of Groveland, FL, in the No. 67 TrueCar/Hendrick Honda/Lucas Oil Honda Fit, are primed to get onto the podium for the first time this year after consistent performances throughout the first 10 races of 2013.

California native Tyler Palmer, a rookie from Oceanside, CA in the No. 24 Blackforest Porsche/Mobil 1 MINI Cooper, has starred in his five starts this year with four podiums and five top-five finishes. He could secure his first Pirelli World Challenge on home soil this weekend.

Other veterans in the field include Johan Schwartz, of Denmark, as one of two drivers (with Chase Pelletier) in the No. 12 AnimasCorp/Honda/AmerDiabetes Honda Fit and Sage Marie, of Huntington Beach, CA in the No. 45 Honda Fit.

Four cars have drivers in their first starts: John D. McCarthy and Michael Ashby share duties in the No. 16 Miracles of Mitch Foundation Mazda 2, Kyle Keenan, of Vancouver, WA in the No. 17 Dick Hannah/KBR Prod/Kinetic Kia Rio, Harry Cheung, of Atherton, CA in the No. 32 32 Racing Honda Fit and late addition Andrei Kisel, of Vancouver, in the No. 57 laptopscreen.com MINI Cooper.