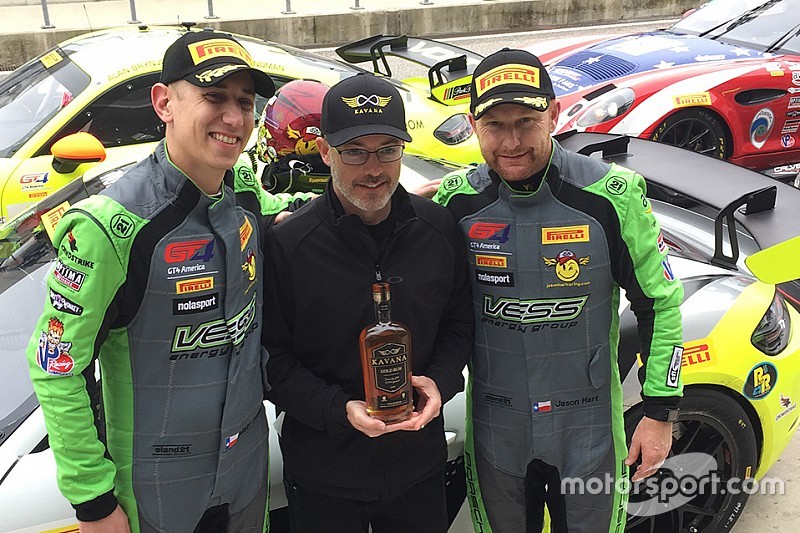 Texans Matt Travis and Jason Hart demolished the opposition in the SRO Pirelli GT4 SprintX season opener at Circuit of The Americas with the Nolasport Porsche 718 Cayman CS MR.

Polesitter Travis held off Jarett Andretti’s Andretti Autosport McLaren 570S at the start, but initially couldn’t shake him off as the dry racing line was surrounded by damp track surface from pre-race drizzle. In close attendance too was Vesko Kozarov in the Rearden Racing Audi R8.

This trio pulled three seconds clear of Kevin Woods’ TRG Porsche, and a pair of Mercedes-AMG GTs – the Murillo Racing machine of Matthew Fassnacht and the RENNtech Motorsports entry piloted by Reinhold Renger.

On the fifth lap, Kozarov attempted to take Andretti’s second place, but was coming from too far back, and when he backed off, he spun. He just about had enough of a margin over fourth place to hold off Fassnacht who had now displaced Woods. The compulsion to go defensive had also lost Andretti some time, so that he now ran two seconds behind leader Travis.

On Lap 9, Woods repassed Fassnacht down the inside at Turn 1, and the latter’s Benz locked up allowing Renger’s similar car through into fifth. At the same time, Andretti had a ‘moment’ and lost a further couple of seconds to Travis, who pitted on Lap 11 with a 4.7sec lead. Renger also dived in from fifth.

Kozarov left it until the end of Lap 14 to pit and hand over to Jeff Burton, while Travis’ co-driver retook the lead in the Nolasport Porsche. He had a 21sec lead over Andretti’s partner Karl Thomson, after a slow stop for the Andretti Autosport team. The RENNtech Mercedes, now wheeled by Parker Chase.

The surprise top-six intruder was the Epic Motorsports BMW M4 which had enjoyed a… well, epic pitstop… so that James Clay came in from seventh and his co-driver Trent Hindman emerged in fourth. That put the M4 ahead of Burton and Woods’ co-driver, Chris Bellomo.

Hart had pulled his lead out to 30sec with under 15mins to go when suddenly the picture changed: the Ian Lacy Racing Audi R8 of Frank Gannett had run off the road and into the gravel trap with a right-rear puncture and out came the full-course caution.

For the restart, Hart had a couple of lapped runners between himself and Thomson and that worked out perfectly when the green dropped with six minutes to go. Hindman took a lap to battle past Chase for third place but needed to run wide at the final turn to complete the pass and Chase came right back at him for another thrilling lap of side-by-side racing that also involved them passing Thomson’s McLaren!

Into the final lap, Hindman’s Porsche held a narrow margin while Thomson was still trying to displace Chase’s Mercedes. Once Chase shook off the McLaren, he came right back at Hindman but fell 0.384sec short, the pair of them 8sec behind winner Hart/Travis.

Thomson clung onto fourth – and Am-class victory – for Andretti Autosport, while Burton clinched fifth ahead of the GMG Racing Audi R8 of Alec Udell and Jason Bell.

Bellomo was the big loser following the restart, the TRG Porsche plummeting to 18th at the checkered flag.