(PETALUMA, CA – August 6) TRG-AMR North America debuted two new team drivers for the ninth and tenth rounds of the Pirelli World Challenge this weekend at the Mid-Ohio Sports Car Course. Drivers Mark Klenin and Drew Regitz were still getting settled into their Aston Martin Vantage GT4's, but looked like they'd been driving them all season, with Regitz taking top 10’s in both races. 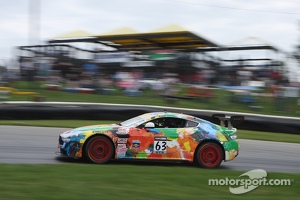 The result made it a top 10 in every Pirelli World Challenge weekend that TRG-AMR has competed in this season and one about which the team couldn’t be more pleased.

Both Klenin and Regitz practiced and qualified well, 11th and eighth respectively, which was especially impressive considering it was their first official weekend running in their newly-purchased Vantage GT4’s. As the weekend wore on, it was obvious the drivers would quickly gain more experience and understanding of the Astons, leading to a giant step forward for both.

In the first race, both drivers were putting down solid lap times, keeping pace with the pack, but a mid-race spin from Regitz set him back a few spots. After getting back up to speed, Regitz showcased his poise and patience, picking off a few cars in front of him, and ultimately moving up to ninth on the last lap.

Klenin put down some incredibly fast laps in the Association Voice/Premium Copier No. 62, but a spin with two laps to go put a damper on the final result. However, the advantage of his quick laps meant he would begin the second race near the front.

The second race began with a standing start, and both cars nose to tail on the grid. Although Klenin had a slightly difficult jump off the line, losing a number of spots, it became his turn to show off his driving prowess. He piloted the car back into contention, finishing just outside the top 10.

Regitz, in the Association Voice No. 63, once again ran a solid race, with no spins this time, leaving him to cruise to another ninth place finish.

Both drivers gained valuable experience in their first weekend with the team, but it was the team that was most impressed with them, leaving a lot to look forward to for the remainder of the season, and going into 2014.

Drew Regitz on the team and his race weekend: "I’m thrilled with the result. It was my first weekend with the team and the professionalism was first-class from start to finish. I couldn’t be more pleased with how everything ended up. To have top 10 finishes in both races is a fantastic result, and I’m glad I could get that for the guys who worked hard all weekend on the car."

Mark Klenin on his weekend with TRG-AMR: "It was just an amazing weekend. Definitely the best I’ve ever done. Drew and I were really pleased with everything. The organization of the team was unbelievable. The cars were great, the setup was perfect. At one point in practice I was the seventh fastest car of the weekend! I had the best starting position I’ve ever had, and probably would have finished seventh if I had gotten a better jump off the line. Steve [Cameron] is amazing, very bright and detailed. It was so nice not to have to worry about the car for the weekend."

Kevin Buckler on the debut of the new TRG-AMR drivers: "This was a fantastic opening weekend for our new Aston program and our new drivers. The car and the team performed flawlessly while Mark and Drew did a great job learning how to handle the new GT4’s. Drew was 'heads up' all weekend and the results really showed for him. Mark was fast and I can really see his potential moving forward. We are all excited to head to Sonoma and continue making forward progress."