Two ‘Heds’ better than one for DragonSpeed PWC effort

The 36-year-old Hedlund from Woodside, California, has driven in a variety of GT equipment and classes in his brief but impressive career, finishing sixth in last year’s ALMS GTC standings, and enjoying a lone Daytona Prototype outing in the 2013 GrandAm finale. His near-namesake Hedman, age 45, enjoyed a breakthrough season in Ferrari Challenge in 2013, the Florida-based Swede taking four victories on his way to third in the final points plus a front-row start at the World Finals in Italy.

DragonSpeed continued to build its own reputation in 2013, quickly establishing itself as a pacesetter in the ALMS LMPC class and making its mark on the world GT enduro scene at Dubai and Bathurst. 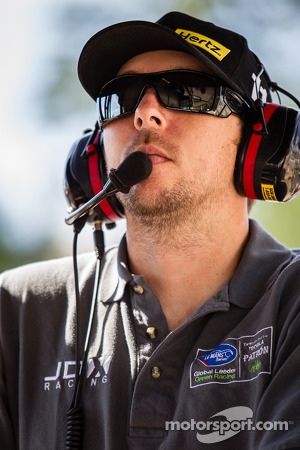 Mike Hedlund: “After spending the last two years sharing with co-drivers in endurance races, I’m looking forward to being selfish this season and only worrying about going fast. The 458 GT3 is a better car than I am a driver, but I’m aiming to close that gap. Being a series rookie means less external pressure to perform, but behind the scenes I’ll be pushing to progress as fast as I can. I’m trusting my training regimen of sim racing, shifter karts, dirt bikes, donuts, and Patrón to keep me sharp! With help from my old friends at ESM and new friends at DragonSpeed, I hope we'll open some eyes, have some fun along the way, and entertain the fans.”

Scott Sharp: “Everyone at ESM is thrilled to partner with Elton and DragonSpeed to run Mike this year. We’ve been working with Mike for the last two seasons, and he’s shown himself to be very talented, passionate, and working hard to get himself to the top. Elton’s put together a strong technical program we’re very excited about. This will be a great platform for Mike and I’m sure we’re going to see him excel.”

Henrik Hedman: “I couldn’t be prouder to be part of bringing the Ferrari marque to World Challenge and am also looking forward to the personal challenge. After our test at COTA, I feel very positive about the team. Elton’s done a fantastic job putting together the best people out there. Knowing the car will be right means I can really focus on my own performance. Adding another car strengthens our progam technically, so Mike’s arrival is good news as well.”

Elton Julian: “I’m excited about our venture into World Challenge. After the decision to admit GT3 cars, we grabbed the chance to check out the series at Sonoma last season and really liked what we saw. Our 2014 program is the result of that. Mike brings tremendous ability and motivation to our effort, and it’s great to see Henrik join the pro ranks after watching him develop from his first race at St. Pete into a frontrunner in Ferrari Challenge. I want to thank them as well as Scott Sharp, Ronnie Vogel, and Scott Bove among others for making it possible to put together this great package for 2014.”