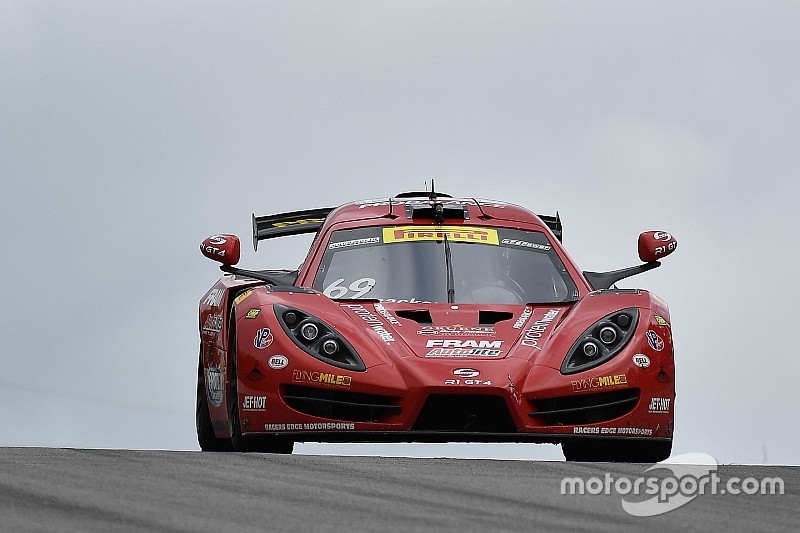 Harry Gottsacker won the second Pirelli World Challenge’s SprintX GTS race at the Utah Grand Prix, but missed out on winning the title at the final round.

British racing veteran Ian James (Panoz Avezzano) led teenager Gottsacker’s SIN R1 at the start, but Gottsacker dived ahead through turn 1, with Jade Buford’s Ford Mustang running third. But the race quickly went full-course yellow, following a startline clash that sent the PF Racing Mustang of Vinnie Allegretta into the pitwall, where it collected the McLaren 570S of Paul Holton and caused a lengthy caution to clean up the track.

Gottsacker led James and Buford at the restart, with the top two pulling clear and leaving Buford to fend off the BMW of Stevan McAleer.

Gottsacker – driving solo – pitted first and didn’t transgress the minimum pitstop time like he did yesterday, although it allowed James to lead and run in clear air. James pitted with 26mins to go to hand over to co-driver Matt Keegan – who rejoined just in front of Gottsacker after a well-judged pitstop timing that was just above the limit.

A mistake at the hairpin almost allowed Gottsacker through, not helped by Keegan’s door coming open in right-hand bends. A full-course caution helped him, which was required to retrieve a stranded car.

Another mistake after the restart allowed Gottsacker to pounce and take the lead, which put him right in the frame to poach the title from championship leaders James Sofronas/Alex Welch, who were struggling in their GMG Audi and ran as low as 18th at one point.

The Audi R8s struggled all weekend with the extreme desert temperatures at Utah Motorsports Campus, and would occasionally lapse into safe mode – starving them of power. They needed to finish inside the top 13 to take the title regardless of Gottsacker’s result.

A spectacular crash between a spinning Mark Klenin (McLaren) and an airborne Andy Pilgrim (Chevrolet Camaro) caused another full-course yellow with 12mins remaining. That happened in front of Welch and promoted him to 12th, the position the GMG Audi needed to win the title. This was further complicated by damage to the front-left corner of the car.

The race went green with just one lap to go, and Gottsacker romped away to beat James/Keegan and Buford/Maxwell to the checkered flag. But Welch finished 10th, to be crowned champion along with Sofronas.

“The car was hot, it was overheating,” explained Welch. “And it was about cooling it where I could and generating momentum to gain the places I needed. Unbelievable.”

Sofronas added: “To do it with a dear friend in Alex, I had total faith in him, he’s been a total rockstar. I had a few issues in my stint, but I knew Alex would bring it home where he had to.”

Drew Staveley won the Am class championship, despite a drive-through penalty in his Ginetta for overtaking in the pitlane.