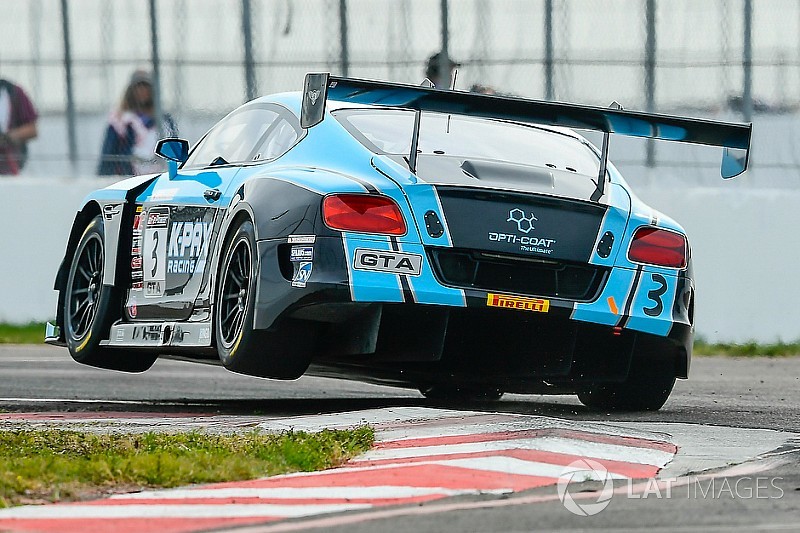 Rodrigo Baptista and Maxime Soulet scored a dominant win at Virginia International Raceway, but K-PAX Bentley teammate Alvaro Parente was shoved off and into a barrier on the opening lap.

On the outside of the front row, polesitter Daniel Morad sprinted into the lead in the CRP Racing Mercedes AMG GT, but out of the second corner, Alvaro Parente drew the K-PAX Bentley Continental alongside the other front-row Mercedes of Mike Skeen and was spun off the track backward and hard into the concrete barrier.

That left his teammate Rodrigo Baptista in third ahead of the Porsches of Scott Hargrove (Pfaff) and Michael Christensen (Alegra) followed by Toni Vilander’s R. Ferri Ferrari 488. Skeen was adjudged to be at fault for the shunt, and was given a three-minute stop-n-hold as the field was unleashed.

On lap 8, Baptista made his first real challenge for the lead, his Bentley looking cumbersome over the tight and twisty corners, but very settled into the final turn leading onto the pitstraight. Combined with a straightline speed advantage, he showed every sign of remaining a thorn in the side of the leading Mercedes drivers.

On lap nine, Baptista made his pass at the end of the front straight, somehow keeping the mighty Continental under control while tramping on the brakes. At the same time, under pressure from Parker Chase’s Audi, Wei Lu threw away seventh in his Ferrari.

Baptista had a 1.5sec lead over Morad by the time he pitted the Bentley to hand over Soulet, with Morad stopping just a lap later. The CRP stop was disastrous, an obstinate wheelnut to blame, so that Fabian Schiller emerged in fifth.

By contrast, R. Ferri’s stop was perfect, allowing Miguel Molina to drive the #61 Ferrari out into second place. He was soon 11sec behind the lead Bentley, but remained ahead of the Porsches now driven by Wolf Henzler (Pfaff) and Spencer Pumpelly (Alegra).

Schiller, no doubt riled by the CRP pitstop issue, set fastest lap on lap 20, as he closed on the Porsches ahead who were caught behind a backmarker, although Soulet in the lead Bentley narrowly eclipsed it to grab pole for tomorrow’s race.

Pumpelly’s defensive driving to keep Schiller behind allowed Henzler to escape a little, and Wolf’s life got even easier when Schiller poked his front fender alongside the Alegra Porsche and turned it around. The move allowed the Corey Lewis/Alec Udell Loci GMG Porsche up into fourth, as Pumpelly inevitably lost a place, and Schiller equally inevitably received a drive-through penalty.

Soulet’s winning margin was 19.474sec with Molina holding a five-second margin over Henzler. Lewis just about held off the recovering Pumpelly for fourth, with the Dalziel/Chase Audi collecting sixth.

Martin Fuentes and Cesar Bacarella were 11th overall and conquered the GT Am category, with Tyler Hardwick clinching GT Cup in the Lamborghini Huracan.