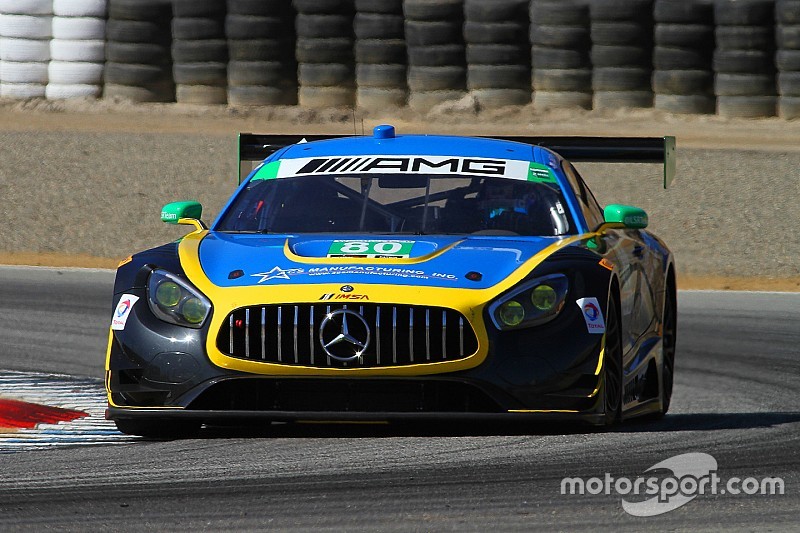 Polesitter Fabian Schiller in the CRP Mercedes held onto the lead at the start and his immediate pace was matched by Maxime Soulet in the sole surviving K-PAX Bentley Continental. Behind them Martin Fuentes’ all-Amateur Squadra Corse Garage Italia Ferrari 488 held off Heckert and Allesandro Bressan in the Dream Racing Lamborghini Huracan, Miguel Molina’s R. Ferri Motorsport Ferrari 488, Wolf Henzler in the Pfaff Porsche and Jeff Segal’s Ferrari of Vancouver 488.

Fuentes wisely gave way to Heckert, Bressan and Henzler on the fourth lap, while on the fifth lap Heckert ran wide coming onto the back straight, giving up third and fourth to the pursuing Lamborghini and Porsche. However, Heckert reclaimed fourth from Henzler on Lap 6.

In the mean time, Bressan’s Lamborghini had broken away from this duo by setting fastest lap, although he was still eight seconds behind the lead battle.

Fuentes was doing a fine job to hold onto sixth overall still at Lap 10 but was coming under increasing pressure from fellow Ferrari drivers Molina and Segal, Ryan Dalziel in the TruSpeed Audi R8 and Spencer Pumpelly’s Alegra Motorsports Porsche 911.

Schiller held a 1sec lead over the Bentley when he ducked in at the end of Lap 15, and Daniel Morad got onboard, but it was an 80sec stop as they duct-taped the front-left splitter which had been flapping around at high speed. The K-PAX Bentley pitted two laps later with Rodrigo Baptista taking over from Soulet and emerged ahead of the CRP Mercedes.

Thus once all pitstops had been completed, Baptista was up front by just 1.5sec over Morad, with Skeen third in the Lone Star Mercedes, chased by Yuki Harata who’d taken over from Bressan in the Lamborghini, Scott Hargrove (replacing Henzler in the Pfaff Porsche), ahead of Michael Christensen (Alegra Porsche) and Parker Chase who’d replaced Dalziel in the TruSpeed Audi.

The CRP Mercedes’ front splitter damage worsened and prevented Morad from challenging the lead Bentley and on Lap 24 he had to give up second to the charging Skeen who now had 18mins to close the 4sec gap to Baptista.

The Mercedes was under the Bentley’s rear wing with nine minutes to go, and Baptista initially responded well, but a couple of moments running wide let Skeen back onto his tail, and with four minutes to go, the Mercedes driver dived past on a slow left-hander. Baptista then tried to stay with the Benz and plowed off course, and dropped to fifth.

Morad should have completed a Mercedes 1-2, but suddenly dropped to fourth on the final lap – possibly out of fuel – allowing the Porsches of Hargrove and Christensen into second and third.